During yesterday’s Facebook question of the week, Kate Finley asked if news releases have SEO value when distributed via a newswire.

This has been a long internal battle for me. I know the “coverage” isn’t really such, but it always seems to help search engine optimization.

Clients sometimes like to show their bosses the number of places that ran the news release so we don’t always fight the battle.

And, sometimes, it’s okay with us because the site needs a little SEO oomph.

But here’s the thing: It doesn’t help in the sense that the release in your newsroom ranks higher in search results. Rather, your home page does…or a page on your site where the keywords are used does.

Is a News Release on the Wire Duplicate Content?

In doing massive amounts of research for Spin Sucks (the book, not the blog), this doesn’t make sense to my little brain.

A news release printed verbatim on sites such as Yahoo!, Bloomberg, and the Wall Street Journal feels like duplicate content. It is, in fact, the exact, same content running on multiple sites. And, from where I sit, most is not super valuable…or at least valuable enough Google would want it to rank.

Which, I suppose, is why the news release itself rarely ranks, but it’s odd the company’s website does. We’ve visibly watched a site begin to rank higher for certain keywords days after a news release is distributed on the wire.

So, I answered Kate’s question as such: It’s not great for journalists using it to write their own stories, but it is great for search engine optimization.

Do News Releases Have SEO Value?

But guess what? I might be wrong (I say might because Google is about as clear as a day the fog is rolling in across the San Francisco Bay).

Last month, Matt Cutts (distinguished engineer at Google and a name I am getting to know very well during my research), posted in a Google forum “links from your news releases do not have SEO value.”

But, not wanting to take his word for it, SEO Consult did a test to see if that was, in fact, true.

They wrote a news release with a made-up word in it – sreppleasers – and linked to Matt Cutts’s blog (I guess to both be funny and to prove a point).

Within three days, they began to rank for the made-up word. In fact, if you do a search now, you’ll see it has the top three search results.

I asked Frank Strong, who most recently was director of public relations for Vocus and PR Web, what he thinks. 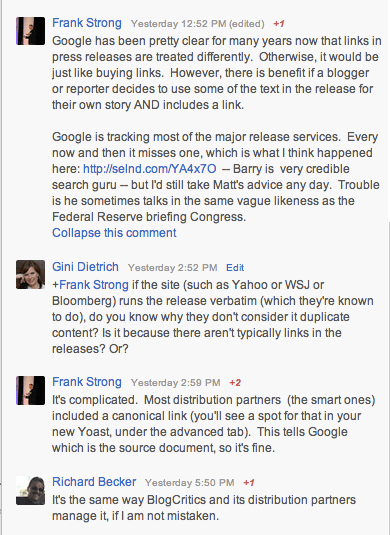 Still, Sean McGinnis and I debated this for a couple of hours yesterday on our Facebook wall and he argues you should treat Matt Cutts’s word like the Bible.

If you use the wires for news release distribution, keep doing it.

If the client will allow you to tell a story via the news release instead of announcing the news (I know this isn’t always possible because we work with a Fortune 10 company that requires us to use a template), do it. That way, perhaps it will be picked up as the beginning to a real story that will help your search rankings.

Use a canonical link in your release so you don’t get a black mark by Google.

Keep an eye on your search rankings prior to and after distribution.

And keep yourself educated on the changes at Google so you don’t get slammed with a hit from them.