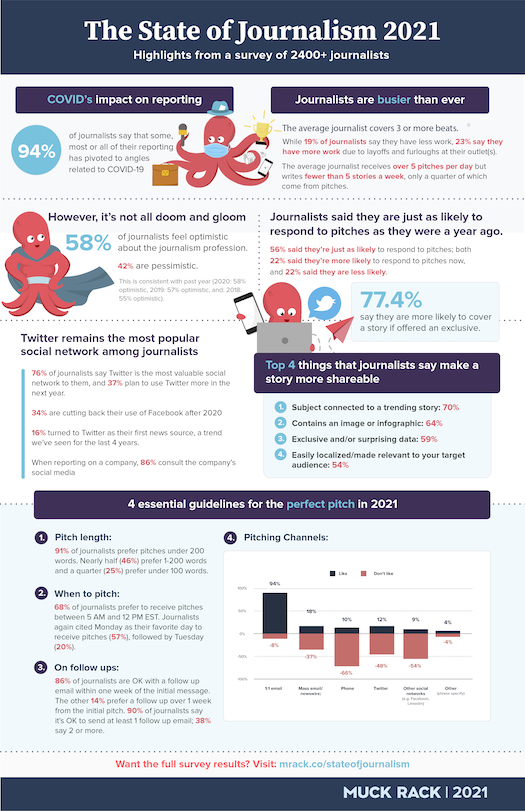 In a study of nearly 2,500 journalists, MuckRack unsurprisingly found that media coverage has completely been thrown on its head because of The Corona. But some of the reasons why are surprising, including what they’re having to do about it, among furloughs and layoffs.

While 62% of those they surveyed are full-time writers, 38% are freelancers or part-time journalists. They are experts, with 60% having more than 10 years of experience and 72% report online or in print. To boot, the average journalist surveyed covers more than three beats, which is something to keep in mind as you go about pitching—they’re scattered and, as I like to say, a bit over their skis while they try to manage the workload of multiple people.

According to the study, 94% of journalists say that some, most, or all of their reporting have pivoted to angles related to The Corona.

But the good news is that, in 2021, 58% of journalists are optimistic about the journalism profession. This is consistent with what MuckRack has seen in past years: 58% were optimistic in 2020, 57% in 2019, and 55% in 2018. It’s kind of a relief to see that, actually, especially with everything the Fourth Estate has been through in the past few years.

Where they get their news hasn’t shifted much. Fifty-eight percent get their news from online newspapers or magazines and 16% say they get it from Twitter, which is down from 22% last year, but the vast majority (76%) say Twitter is the most valuable social network. Facebook is up slightly from last year, Linkedin is steady at 23%, and Instagram slid slightly to 15% from 16% last year.

The Most Credible Sources for Reporting

And speaking about how they use social media, 58% always or usually check a company’s social media when reporting on them, and 62% track how many times their stories are shared by the companies they report on.

As in past years, one-to-one email is most journalists’ preferred pitching channel. The phone is the least popular channel, followed by social media. And, if your email isn’t personalized to that one human being, you may as well forget about it.

As for story pitches, the largest segment of journalists receives one to five pitches per business day or five to 25 pitches per week. Most write five stories per week and a quarter of their stories come from a media pitch. That means 20 ideas/pitches per week are being ignored or trashed.

So what is one to do about this? How do you stand out?

First off, the mass pitching has to stop. I say that with all the love and empathy in the world. I KNOW how hard it is when your client or boss wants you to get the news out to 75 hundred million reporters and get coverage from every top-tier media outlet and make the cash register sing, while you’re at it. I get it. And I also know I’m preaching to the choir when I say that that’s just not how it works.

So if you have to send this survey report to the powers-that-be to show them that one-on-one communication and personalization have to come first, do that. And then get to work on building those relationships so, when you do have something newsworthy to share, they’re ready to hear from you.

Building those relationships doesn’t have to be challenging or take a lot of time.

There is one media outlet that a client of ours is dying to get into and, truth be told, she’s perfect for them. But they won’t even look at you without a $75,000 investment as a “product fee.” Because I refuse to take that as an answer, I made it my personal mission to get them to pay attention to her without the $75,000 investment. Call it church and state or not wanting to pay for EARNED media, but I was going to make it happen if it killed me.

And I did. But it took 14 months. Fourteen. At first, I simply followed their entire editorial staff on Twitter. Then I began to share their content and have conversations with them. Once we had a good rapport going, I suggested they look at some of the content my friend had produced. After about nine months of this, I emailed the executive producer, who I’d been chatting with on Twitter, and asked her what she thought about featuring my friend. Because we’d built a relationship on Twitter for many months, they were open to the idea.

It took another seven months to make it happen, but happen it did—and without the $75,000 investment. I mean, she had to pay me for my time, but it was nowhere near that amount. I probably spent five minutes a day—and now I would consider their executive producer a friend. She often emails me for thoughts on other features.

Yes, it takes significantly longer, and sure, you can drop some serious cash and be featured in a lot less time, but I’ve been able to build a beautiful relationship with her that will transcend the rest of our careers.

Earned Media Is a Long Game

Personalization and one-on-one communications work. As you well know, earned media is a long game. Even with journalists where you have a great relationship, if it’s a new company or a new product or a new executive or subject matter expert, you (mostly) can’t just call and say, “Feature these guys next!” Having the relationship simply means they’ll answer your email. It doesn’t guarantee any coverage.

It takes time, it takes a lot of effort, and you have to be willing to give more than you get. Once we can all help business leaders understand this—and understand the stories behind the data in this MuckRack survey, the better off we will all be.

If you need help with messaging to a business leader about the time it takes to get earned media efforts or want some case studies to provide on what happens when the time is allowed, join us in the Spin Sucks Community.

We can help with that and lots of other marketing and communications issues and challenges.