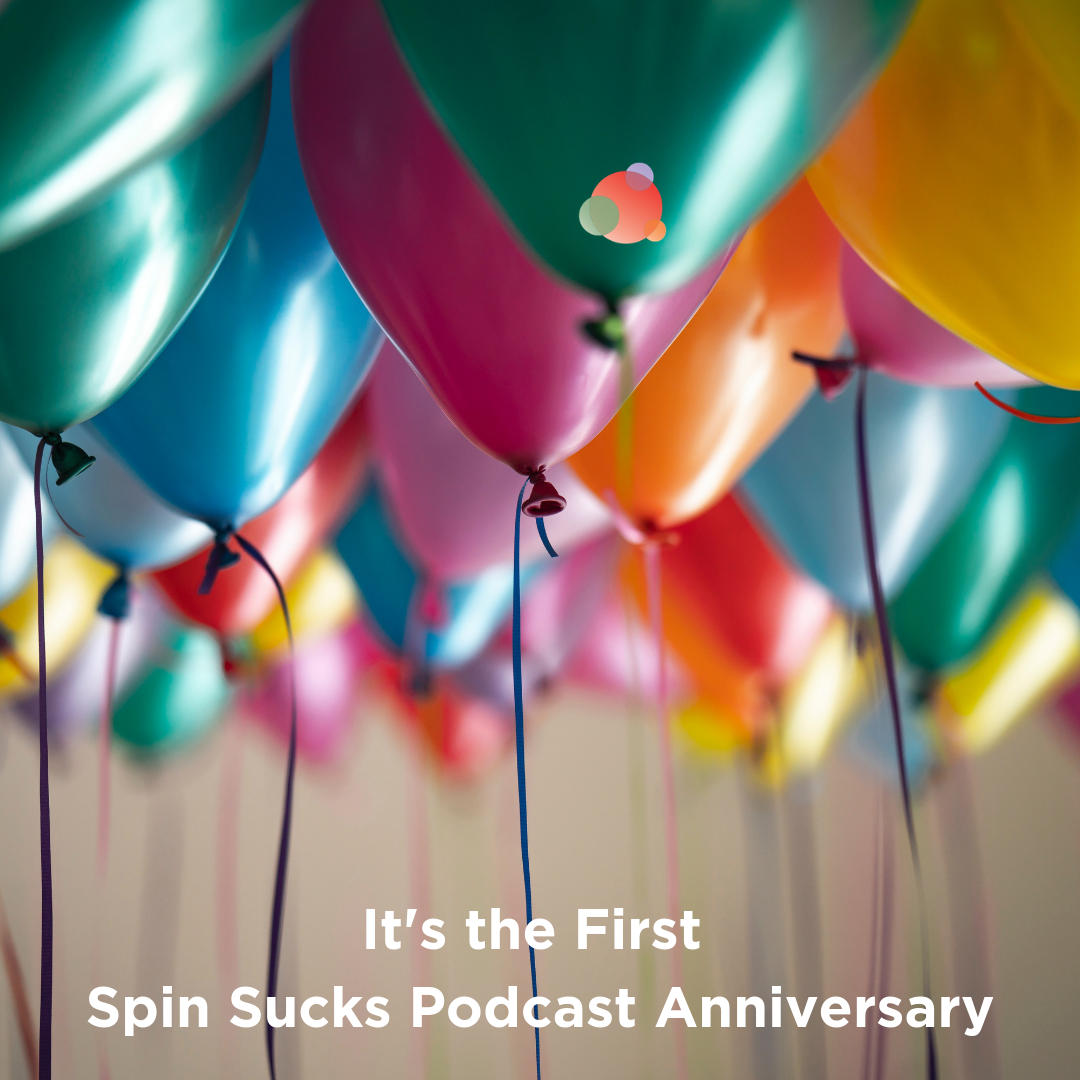 Today is a very special day around these here parts.

It’s been a full year since we launched the Spin Sucks podcast!

To celebrate this milestone, and because our community is so important to me personally, we asked our listeners what they’ve learned from Spin Sucks in the past year.

I’ve learned some things too, and we’ll get into all of that today.

Just ONE Thing from the Spin Sucks Podcast?

A full year of podcasting under our belts.

A year of doing anything is a milestone and it’s all the more fun when people take a few minutes and tell you what they’ve learned on the journey with you.

The first person to share his wins is Shane Carpenter, CEO of a strategic communications firm.

He’s also a very active and engaged community member and is always one of the first to participate when there is a call to arms.

Recently, Gini asked the question, what is one thing you’ve learned from Spin Sucks in the last 12 months? My response is really just one thing? Because I’ve learned like a hundred things.

Spin Sucks is like my Bible. It is the place that I go to for public relations and marketing information. I have learned everything from pitching better, crisis communication, link building, and influencer marketing. How to be more productive. How to build marketing funnels. Why we need to consider voice search information on starting a business. Writing proposals, onboarding plans, business plans. AI measurement and everything about the PESO Model.

Just one thing? No, it’s like a hundred things.

He cracks me up! So I guess just one thing was a big request. You’re awesome, Shane. Thank you!

Next, we heard from Tersia Landsberg, the head of PR for a national law firm, where she runs ALL internal and external communications.

Probably the most valuable thing I learned from the Spin Sucks podcast this year were media pitching tips and tricks. Considering this is my personal weakness, as I don’t have too much experience in it, the Spin Sucks podcast gave me the confidence to start incorporating earned media, even though it was really intimidating at first.

Earned media is such a valuable tool, especially when combined with the other media types in the PESO model.

I’m happy to know we’ve helped Tersia get over the hump.

The Importance of the PESO Model + AMEC

Next up is Tressa Robbins, a professional and social mentor and vice president of client onboarding and implementation at BurrellesLuce.

She has a thing or two to say about how important it is to have multiple models working together.

I have learned so much from Gini Dietrich, the Spin Sucks podcast, blog, and community. But probably the most impactful thing that I’ve learned is that I’ve developed a much deeper understanding of the PESO model.

Combining that with the AMEC measurement framework to the point that I felt comfortable and confident in guest lecturing at a university on PR measurement and its components.

We love having Tressa in the Spin Sucks community and enjoy learning so much from her about the industry.

Now we have Chris Williams from Planet Magpie, which is one of the coolest IT firms around, if only because they LOVE their dogs.

Everything they do is dog-oriented and it’s very fun and clever.

Chris is the digital marketing and communications manager there.

Here is what he has to say:

One thing I’ve learned from the Spin Sucks podcast is how to better strategize my approach to media.

The podcast introduced me to the PESO model, which is a great way to conceptualize different media types and work them into my marketing routine.

I love his almost surprised “it works!” at the end. LOL! Yes, it does indeed work.

It’s OK to Admit What You Don’t Know

I love this next clip from Paula Kiger, because she and I are of the same mind.

She talks about how being attentive, caring, and present makes all the difference in the world.

One thing I’ve learned from the Spin Sucks podcast is the value of admitting what you don’t know, which goes hand-in-hand with the value of answering the most basic of questions.

Like the time early on when I said I didn’t know what PESO was, and Gini wrote a blog post about it to answer my question.

And another time when there was a discussion about how to make a link within a blog post go to an external page instead of opening within the page. I didn’t get it, and Gini walked me through it.

Those little things that build big relationships and help grow community and make us incredibly loyal. So thank you for all of that transparency and for encouraging us to ask the simple questions.

The best part about what Paula says about the PESO model is, without her question, I wouldn’t have drawn a kindergarten-level graphic of what it looks like, that our graphic designer then made pretty when I included it in Spin Sucks, the book.

So thank YOU, Paula, for asking the question that set all of that in motion.

The Community Is Where It’s At

I’ve spoken about how awesome the Spin Sucks community is—and how valuable it is from a professional perspective—on the podcast and on the blog and on social media and in email and, well, pretty much everywhere else.

I wanted to wish a happy first anniversary to the Spin Sucks podcast!

Spin Sucks has taught me the importance of nurturing relationships within an online community. No matter where you are in your career, whether you’re a recent college graduate to head super woman like Gini Dietrich, take time to get to know others and let them get to know you.

Being an active member of the Spin Sucks community has not only allowed me to learn from my peers, but has given me a platform to share my own expertise.

So congrats, Gini, on this huge milestone and I look forward to celebrating many more.

What a nice congrats, Deirdre. Thank you!

Another listener, Heather Feimster who is communications coordinator for Provenance Consulting has been appreciating our awesome community.

She makes an important point about maintaining integrity and high ethical standards in the industry.

Spin Sucks is my lifeline.

Over the last 12 months, it has provided me a way to reconnect with the real people after a hiatus from the PR profession. It’s become a place to share wins and lessons learned, to build a supportive community of like minded professionals. And very often a place where I am humbled in a good way by the incredible peers that Spin Sucks is brought together.

There’s a sense of camaraderie between us all who have a passion to do what we do well with integrity and with the highest ethical standards.

So thank you, Spin Sucks, for providing me and probably a few others with professional confidence, personal purpose, and an opportunity to re-engage in the industry.

Heather, I’m humbled every day in the community, too! We are surrounded by some really smart people, aren’t we?

Measurement Is the Path to Our Hearts

Next up is Emily Zarecki who, like Shane, said it was impossible to choose just one thing.

Emily is in charge of content for R-P Marketing.

Here is what she has to say:

It’s hard to pick just one thing. There is so much information available through Spin Sucks and I’ve gone there for advice on a number of different topics.

If I had to name two I would say: best practices in measurement, as well as implementing the PESO model.

Emily, it makes my heart full to know you value the work we do around measurement. Thank you!

We’re All In It Together!

Many of you know Katie Robbert as the yin to Christopher S. Penn’s yang, but she also has become a very close friend of mine.

I will never forget the moment Penn told me I needed to meet the woman who was going to run Trust Insights as its chief executive.

He could not say enough nice things about her brilliance…and he was right. Here is what Katie has to say about the past year with Spin Sucks.

One thing that I’ve learned from being part of the Spin Sucks community is that we all share the same types of challenges and issues as agency owners and as staff members.

And I mean that, not in the sense that we’re not all working towards our own specific goals, but it’s good to have a community behind you to ask questions and to see, oh, someone else has already tackled that type of problem and I can probably learn something from them. It builds camaraderie.

So I think that that’s the biggest thing that I’ve learned from the Spin Sucks community, is that you’re not alone in it.

She’s absolutely right—we do all face the same challenges and it’s amazing to have peers and colleagues who can help us make less costly mistakes and fail faster.

I Didn’t Want to Start a Podcast…

I can’t tell you what it’s meant to hear these comments from these people.

To everyone who sent us a lesson…thank you!

And now it’s my turn.

I’ll be honest. I started the Spin Sucks podcast with some trepidation.

We talked about it for years, but I couldn’t just seem to get my butt in gear to get it done.

But then the amazingly brilliant and easy-to-work with women from One Stone Creative told me there is more than enough content on the blog to create a podcast.

They said, in fact, I wouldn’t have to do any work, other than record something weekly.

They made it so easy, it was impossible to say no.

Thanks to them, we’re here a year later.

…But It’s Been So Worth It

It hasn’t been without its challenges. For some reason, my brand new mic—you know, the one that is only 52 episodes old—works only when it wants to.

So there have been many shows I’ve had to re-record, sometimes at the very last minute.

That’s not frustrating at all. Ha!

And, while I’m being completely forthright, I’m not a podcast listener so it’s been challenging for me to get excited about doing it every week, if only for that reason.

But when someone comes up to me at a conference and says it’s so nice to meet me in person because I’m in her ears every week, it makes it all worth it.

Receiving notes from so many of you about what you’ve learned in the past year also makes it worth it.

Thank you to every one of you for sticking with us for the past year!

And, if you don’t already subscribe to said podcast, we’d love to have you!

You can subscribe now on iTunes, Google Play, Overcast, or Stitcher.

If you’re a Spin Sucks podcast listener, what have you learned in the past year?

Photo by Adi Goldstein on Unsplash