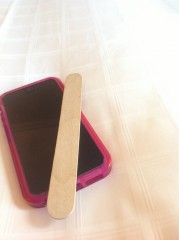 On Sunday afternoon, I participated in the Counselors Academy pre-conference session on how to take photos for your content, rather than relying on the work of someone else.

Armed with just the cameras on our phones, Paul M. Bowers, sent us outside four times during the three-hour workshop to take photos. We had 10 minutes to take 10 photos each time.

His point was, when given the opportunity to step outside of the box, not many of us do it.

And then the fun began.

The first time he sent us out with how to take photos for your content in mind, the only assignment was we couldn’t shoot anything more than six inches off the ground.

His point? To see how creative people are when limited to that range. People came back shooting only things on the ground, while others laid on the ground and shot upwards (I laid on my belly in the hotel’s driveway and nearly got run over!).

After he reviewed the good, the bad, and the ugly (though he never said any of our photos were bad or ugly), he asked us how the photos made us feel.

When you look at any of the above photos, they elicit some sort of response from you…except the middle one, which is a shared experience for those of us in the workshop. The stick is what Paul gave us to make sure our phones weren’t any more than six inches off the ground.

Because we all have the shared experience of the stick, we thought that photo was funny.

The Rule of Thirds and Negative Space

Then he talked about the rule of thirds. You always want the focal point of your image to be in one of the thirds of the screen: The top third, the bottom third, the right third, or the left third so it creates what’s called negative space.

In other words, centered images without space around the photo’s subject are L-A-M-E. Think about white space on your websites, blogs, or even on your business cards.

I love white space, but we tend to want to fill the space.

When you’re shooting images to standout from others on the web, this is a big no-no. White – or negative – space is good!

And we were sent out to take 10 photos in 10 minutes combining the rule of thirds with negative space…but this time we didn’t have to work only six inches off the ground.

See how the images don’t focus the subject in the middle of the page? I actually took one photo that looked great and used the rule of thirds in the thumbnail version, but when you blew it up on screen, it was totally centered.

Think about how the images will look when they are bigger than what you see on your phone’s screen. It is always better to err on the side of too much rule of thirds, just in case.

He also said the reason Tom’s pencils work so well is because the photo has interesting shapes, texture with the pencils against the patterned napkin, and form.

The third assignment was lighting: Soft and hard. He talked us through hard lighting, which is what happens when the sun is at noon and the types of shadows it creates that are really, well,  hard.

For instance, think about the shadow underneath your car on a really sunny day. How is that different than the one when it’s partly cloudy or closer to dusk? The former is hard lighting and the latter is soft.

He split the room up and half were to get images of hard, while others did soft. Because it was a cloudy day, I was pleased to receive a soft lighting assignment.

Take a look at Ken’s photo. See the hard lines the lighting above the artwork creates? And then Forest’s feather creates a soft shadow on the bedspread from the natural light coming in the window on the lefthand side.

Neither or right or wrong…they just elicit different feelings.

For this last assignment, I was running out of creative juice and was really hungry (darn you, Pete the Tapeworm!) so I hired a creative consultant.

Martin Waxman helped me create 10 photos that had an image in the foreground with a blurry background. What we came up with, instead, were photos of him posing in funny ways (I was tired and hungry!).

But some of my peers took the assignment more seriously.

Look at how Tom’s subject is in the foreground and so present, while the background is blurry, giving the image so depth, but keeping the apples very prominent.

The piano keys in Forest’s photo is different in that the foreground is blurred and the background is strong.

Two different takes on the assignment, but both very compelling.

Much more compelling than, say, this one my creative consultant and I took.

The only thing I wish Paul had done is ask us to come to the workshop with 10 blog posts chosen and then asked us to take photos to support the content.

Afterwards, Joe Thornley said, “The world is full of interesting things. Why use an image everyone else is using from Creative Commons? Go out there and shoot something for yourself.”

Now, armed with these tips, you can!

Thanks to Ken Benson, Tom Garrity, and Forest Featherston who all gave me permission to run their photos here. The image at the top of the blog post shows you the tools you need to get started.