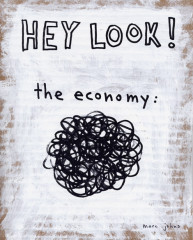 Have you seen the video/game on the Google home page today? I made witches brew for a good three minutes this morning.

I thought it’d be kind of funny to do something today such as leadership lessons from Halloween or what Halloween has taught me about PR (just to be a smart butt), but alas. My creativity is failing me.

Instead I thought I’d write about something equally as scary…what’s been on my mind of late: The economy.

By a show of hands, how many of you think about the economy, how it affects your job, and a plan B should things go south again?

I’m just kidding. I can’t see your hands. You don’t have to raise them, but if you do, send me a picture. I think that’d be hilarious to see!

In all seriousness, I’ve been thinking a lot about this.

In 2011, we were just coming out of the Great Recession when the first debt ceiling debate happened.

Because business leaders were still so skittish, everyone (and I mean, everyone) put on the brakes on paying their bills. Our accounts receivables went from 30 days net to 90 – and even 120 – days net.

When you are already short on cash because of the previous two years and then clients stop paying their bills, it’s a pretty painful experience.

I remember having to wait until the very last minute – and sometimes a day or two later – to approve payroll. My assistant had to hand deliver the check for health insurance – on the day it was due – so they didn’t cancel us.

That was the year I thought we were going to have to close our doors.

And then, just as suddenly as it began, the debt ceiling was raised and business went back to normal.

When it happened again last month, though, the stock market didn’t even react. The government was shut down for 16 days and cost the country an estimated $24 billion, but no one blinked an eye.

Earlier this week, I had lunch with our banker and I asked him his opinion on all of this.

He said something really interesting is happening – something that has never happened in his career: People aren’t borrowing money.

Most entrepreneurs, he said, are using the cash in their businesses to pay down debt and are sitting on lots of cash in their checking accounts…and not buying anything. No one is borrowing money for capital equipment or property or strategic employees.

We certainly are doing the same thing. I’m scared to death 2011 will happen again – and soon – so I’m hoarding cash.

But is that the right thing to do? We all react, based on our own experiences. Maybe it is and maybe it’s not, but what I do know is economists are talking about 2014 being another soft year and I don’t want to be in the same position we were in in 2011.

There are three things that could affect how business is done in 2014:

How the Economy Affects PR

What does this have to do with PR, you ask?

In a down economy, PR/marketing/advertising is the first to go.

This means PR firms are let go (or budgets are reduced) and PR professionals are laid off.

I don’t say this to scare you or set you into a stage of panic.

Rather, I want you to think about the next six months as a way to prove your worth.

We talk a lot here about how to provide the metrics that show you are an investment, instead of an expense.

In a meeting with a client yesterday, I learned a good 40 percent of their inbound leads are coming from our efforts. I nearly stood on the table and danced a jig.

If you are creating that kind of volume, the argument is made. You’re as valuable as the highly paid sales guy who isn’t going anywhere because the company can’t afford to lose his relationships.

The awesome image is courtesy of Marc Johns, who drew it in 2008 and re-released it in 2011. Heck, he could have done a third release this year.