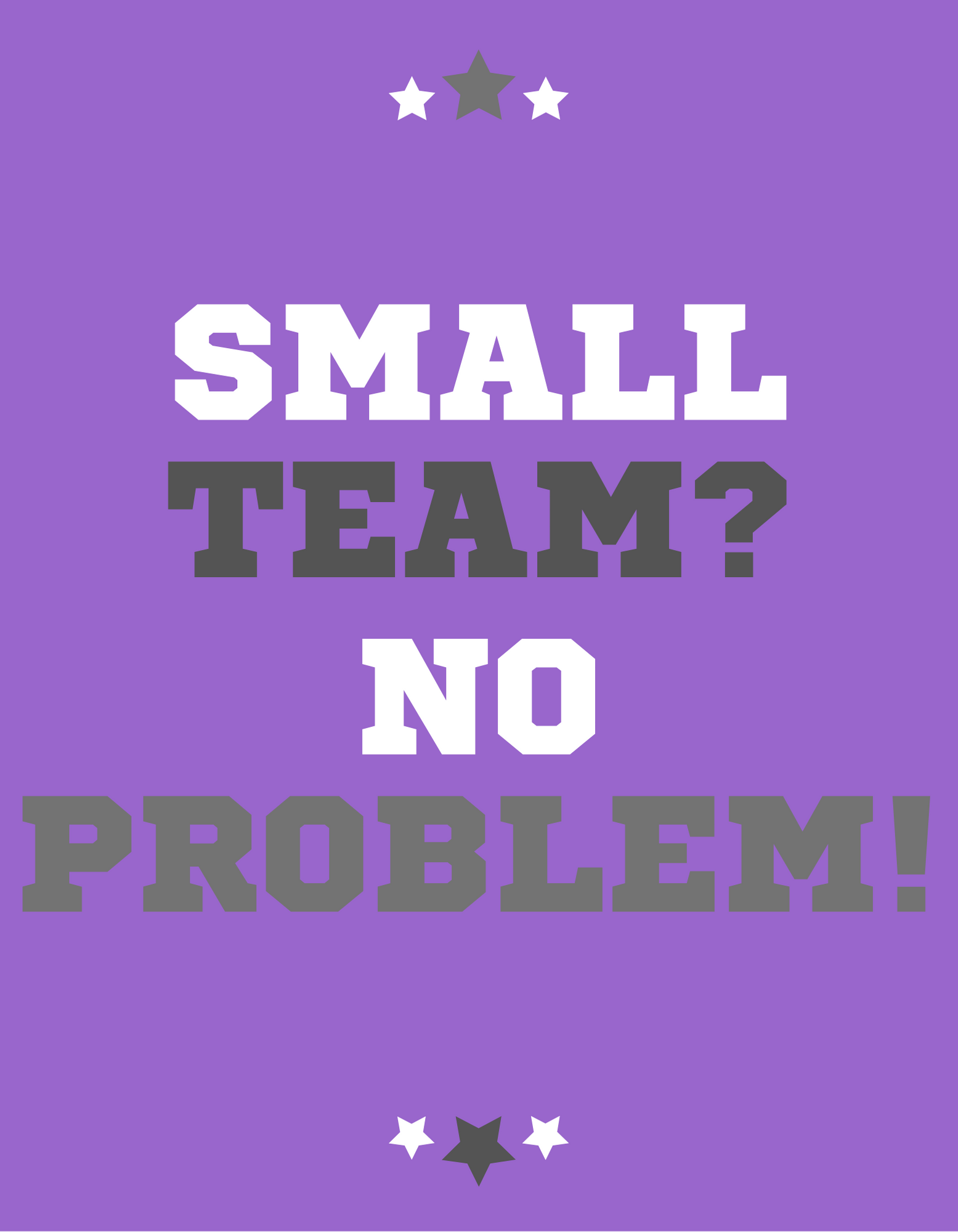 We launched the PESO Model Certification with Syracuse University right before the world caught on fire.

And, even though things have changed drastically since then, I still spend a good portion of my days working on PESO Model content, reviewing homework with those enrolled in the course, and answering questions for those who are working toward their certification.

At the same time as doing that and running my own agency, I also serve as chief marketing officer for two companies.

As part of my CMO work, I’m building teams to implement the PESO Model inside those organizations.

Because of that variety of experience (other than never being bored), I have learned the different nuances of how to implement the PESO Model in large, small, and one-person teams.

And that’s what we’re going to talk about today.

How to implement the PESO Model, no matter the size—or experience—of your team.

I’ve often said that the order of the PESO Model acronym is not the order that you implement the media types.

You almost always want to start with owned media.

You don’t have anything to use in email marketing or lead generation.

You can’t optimize anything and build your reputation, online and off.

And, without content, you don’t have anything to prove to an overworked journalist that your organization is an expert about the topic du jour—and will make their jobs significantly easier.

If you’re going to do one thing in the PESO Model, owned media is the thing.

But that doesn’t mean you have to do all the things, either.

You don’t have to do blog posts and eBooks and videos and livestreaming and podcasting and white papers and original research.

Slow down there, Nelly.

It’s OK to choose one thing and do it really well.

Then move on to earned media, shared media, and finally paid media.

And THEN you can add more into your owned media plan.

This is especially true if you have a small team or are a team of one.

It’s impossible to do all the things—and it’s not productive, either.

The aforementioned client whom I serve as CMO for?

We chose content and LinkedIn as our starting points.

The founder of the company spends about 30 minutes a day on LinkedIn.

He shares our content. He comments on others’ content. And he follows certain hashtags to join additional conversations.

In a recent conversation with a former colleague, the friend said to him, “I can’t believe how fast you have grown in just a year.”

He laughed and said, “We’re only five people.”

His friend said, “What?! You look significantly bigger than that.”

That’s all because of well-placed content and 30 minutes a day spent on LinkedIn.

Their goal is to compete with the big guys in the industry so we’ve employed a David vs. Goliath strategy.

And, because the marketing team is made up of me (25% of my time), him (10% of his time), and a part-time marketing coordinator, we have to be very smart about how and where we spend our time.

If you are a small team or a team of one, start with one type of content.

Perhaps you do a weekly video that is embedded on the site and distributed through email and social. Or maybe you tackle a weekly, bi-monthly, or monthly podcast.

Whatever it happens to be, make it easy on yourself.

Another thing you can consider, especially if you have a small team, is how to automatically curate content to share on social media.

You don’t have to do it on your own!

I know, I know. Some of you feel really icky about automating any part of social media. I get that. I was once you.

But there is no reason on earth you can’t automate the curation part of it—and then spend the time you do have on engaging and, well, being social.

Curating content that your prospects and customers find useful, relevant, and worth actually sharing is the cornerstone of your shared media strategy.

You’ll hear me talk quite a bit about how 70% of what you share should be about someone else and 30% about you, your organization, or your client’s organizations.

Back in the day, when social media first launched, I would spend an HOUR every day, curating content for my own social networks.

Let’s say I were doing that for a client.

That’s ludicrous! I’d far rather spend client money on things that result in something other than a full social media calendar.

Heck, I’d rather spend that time of time on something that drives results for my own business.

And that’s not just me.

Research shows that an employee or retained staff member spends anywhere from 20-40 hours a month scouring the web for content to share.

Agencies bill an average of $125/hour for the most junior person to do content curation.

No wonder executives think we don’t do work that translates to sales. Phew!

However, there is a solution!

One I discovered when lamenting to Christopher S. Penn last summer.

I told him how much time it took to curate content.

Even though I, myself, wasn’t doing it for clients, I was doing it for my own social networks and it was A LOT.

He said, “You know. I think we can automate that.”

He had me send him a list of blogs and publications that I have in my Pocket feed and he got to work.

Today, he is able to “spit out” a spreadsheet that has the text, the URL, a date, and the time to publish. I then take that spreadsheet and tweak it so it fits our style and our voice.

It’s uploaded to CoSchedule every Friday and scheduled for the following week.

This works for any social media management software you use—Hootsuite, AgoraPulse, Sprout Social, or whatever it is that you use.

Now I spend 20 minutes a week versus 20 hours a month getting everything ready—and my time spent on social media is to engage, not curate.

Which is sort of the whole point, isn’t it?

If you want to have Chris and the Trust Insights team help you do the same, check it out here.

Now let’s talk about how to build your earned and paid media plans when you have a small team—or you’re trying to do this all on your own.

I’ve never been a big fan of building huge media lists and distributing a news release to everyone on the list.

It’s not a strategic way to go about your earned media—and it rarely works.

And, if you’re a small team, it creates far more work than is necessary.

Here is what you can do instead.

Every publication on earth (Spin Sucks included, if you’re so inclined!) needs content.

Of course, it has to be good content and it has to be engaging and interesting and say something not everyone else is saying.

So go to this little tool you have at your disposal called Google.

Type in your topic and hit search.

On the first page of results, I’m willing to bet you find three or four media outlets or blogs that write about your topic.

Let me give you an example.

If I Google PESO Model, PR Week, Mashable, PR Daily, and Biz Journals appear on the first page of results.

If I go to the second page, the PRSA blog and CommProBiz show up.

In less than 10 seconds, I have six media outlets and blogs I can pitch with PESO Model contributed content.

Or whatever the heck you want to call it when you write the content and they publish it.

The point being, I just created an earned media list of places that are more than likely going to agree to publish my content.

Now I have to produce it, which seems overwhelming if I think about six articles, but if I parcel them out over several weeks, it’s much more manageable.

I can hear some of you saying, “Sure that works for you because the PESO Model is often written about, but what about my topic? Surely it won’t be that easy.”

I would like to note before we do that, though, that five years ago, literally no one else wrote about the PESO Model.

You can also create a category, but that takes a bigger team.

For now, let’s work with what we have.

On the first page of results, I find the Houzz and Home Advisors blogs.

On the second page is House Beautiful.

I’ll have to dig a bit further to get seven to 10 media outlets and blogs, but the point is you have no excuse!

Now it’s time to think about how to promote this to audiences who don’t yet know you.

This is where boosted content and paid social media come into play.

For those of you with small teams, boosted content is a really easy way to reach new audiences without having to learn the skill of social media and pay-per-click advertising.

It’s really as simple as posting content to your social media of choice and then clicking the “boost content” button.

At the very least, do that.

If you want to go a step further and learn how to do social media marketing on your own, I cannot recommend Adrienne Richardson more.

She is who I learned Facebook advertising from—and she made it easy-to-understand and easy-to-implement while focused on results.

Today, I can tell you exactly how much money we have to spend to hit our revenue goals.

For now, boosted content will do the job, particularly when you’re time crunched and have other priorities.

Of course, your owned media, social media, contributed content, and boosted content aren’t the only things that make up the PESO Model.

They are the four cornerstones that build your foundation, but you’ll also want to include search engine optimization, email marketing, lead generation and nurturing, influencer marketing, community, partnerships, measurement, and more.

But, for small teams that have to prioritize, this is a really good place to start—and it helps you build a foundation to grow every month, quarter, and year.

Learn How to Effectively Use the PESO Model

The PESO Model Certification not only goes deeper into how you build your foundation, no matter the size of your team, it provides you all the tools you need to grow.

It also teaches you how to measure the work you’re doing so you can prove a return-on-investment, which is going to become increasingly more important in these uncertain times.

If you want to become certified—and learn how to appropriately use the PESO Model inside your organization, check out the online course by clicking the button below.