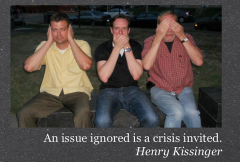 It’s become the default mode for any organization’s crisis…”Penn State has a PR problem,” people will mutter and wait to see what some spin doctor will concoct to make it all go away. We wait with bated breath to see which crisis communications firm the organization has hired and guess at how much they’re being paid.

Human nature requires us to want a brilliant PR strategist to make it all go away, as if any amount of messaging can make the bad facts disappear like the $20 you handed a magician to perform a trick during the company holiday party.

Executives hope and pray perception really is reality as they tout their community efforts and non-profit donations. They begin to talk only about the good they’re doing and choose to sweep the bad under the proverbial rug.

There is a difference between an issue and a crisis.

An issue is something the organization discovers is happening and comes clean with it. For instance, if Penn State leaders had taken steps to fire Sandusky years ago, the university would have needed specific messages for its board, shareholders, managers, students, parents, teachers, community, and the media. It would have had to have been carefully planned and there would have been several multiple hour, late night meetings as the communications team (made up of executives, communications experts, and lawyers) thought through every possible scenario.

By doing so, Penn State could have framed the story to show how it would not tolerate such actions and how it took immediate steps to hold those responsible accountable. They would have done issues management really well.

They chose, instead, to ignore it for years and then, when it finally was discovered (and it is always discovered), it was a full-blown crisis.

Not only is a crisis expensive, it can hurt a company’s stock price, create a mass exodus for executives, and – in the very worst cases – create bankruptcy (Bridgestone Firestone and Arthur Andersen are great examples of that).

Wouldn’t you rather manage an issue before it becomes a crisis?

Tips to for Issues Management

With issues management, it’s important to remember it’s often not the content of the story that matters, but who tells it first. When you tell your story, you have the best opportunity to stay in front of it. Take the punch to the nose. It may break, but it will heal.

When the media finds out about your issue and they tell your story, you almost always end up with a crisis. There is no way to answer what you knew, when you knew it, and what you’ve already done without looking guilty in the public eye once your issue become a crisis and makes headline news. Wouldn’t you rather be the one telling it?

We’re human beings. We all make mistakes. When you are faced with going public or choosing to ignore it, which will you do? If it’s the latter, please remember…no amount of public relations “spin” can help you.

A version of this first appeared in my weekly AllBusiness Experts column. The photo is Scott Selby (my brother-in-law), Mr. D., and Don Dietrich (my father-in-law).