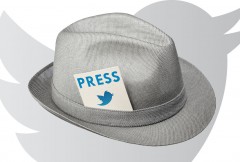 One of the most interesting uses of social media, to date, is how it was used during the Boston Bombing manhunt.

Not only could you get updates on Facebook and Twitter – and follow certain hashtags to get the kind of information you wanted – you could listen to the police scanner and learn what was happening full minutes before they reported it on television.

It was such an incredible combination of traditional media, citizen journalists, and law enforcement, it was almost impossible to pull yourself away.

In fact, people were so obsessed, police had to ask the public to stop posting what they were doing on the social networks.

They were certain, at one point, the accused bomber was watching the Twitter feed to stay ahead of the hunt.

Breaking news on the social networks has become such a natural course of action, most newsrooms monitor what’s happening to plan their editorial.

When Phillip Seymour Hoffman died, we all saw the news break on the social networks and then confirmed it was true when the Wall Street Journal and CNN ran stories.

Social media has completely changed the way we communicate.

And it has changed the way PR professionals do their jobs.

In the recent “State of the Media Research” report, Vocus looked at just how much has changed…and what has stayed the same.

A few interesting statistics from the 256 journalists surveyed:

To their credit, Vocus dug into why journalists still prefer email as the main communication method from PR pros.

Some of the direct quotes were:

I don’t think people can develop enough interest and context for a social media pitch. If it’s longer and public, I don’t want my competitors knowing what I might be working on. – National newspaper reporter

Social media is conversation in public with the public. What I decide to report on is not open for public debate. Plus, it’s lazy. If you can find my Twitter handle, you can find my email. – National magazine healthcare reporter

I get ideas from Facebook and Twitter, but I prefer pitches by email with more information. I don’t want a ‘marketing’ pitch that sounds like an ad. In fact, that is usually a turn off. – Regional online business reporter

As Much as it Changes…

As much as it has changed, it still remains the same.

You’re building relationships with human beings. Human beings who are busy, who have feelings, who have interests and passions and hobbies…and who are more inclined to respond to an email or answer a phone call from a person they know.

Use the social networks to build those relationships.

Connect with journalists there, share their stories, engage them in conversation, learn what you can about them. And then pitch them via email.

It certainly is a lot easier today than in the old days when you had to pick up the phone and call every journalist, but it still takes time and effort.

They are on the social networks. They want to hear from PR pros there. They just don’t want to be pitched there.

Use at your discretion.

P.S. I’m hosting a webinar for Vocus this Thursday at 2 p.m. ET to analyze the results from this Report. I know it’s the same day as our webinar with Amy Vernon, but if you’re so inclined, I’d love to “see” you there.