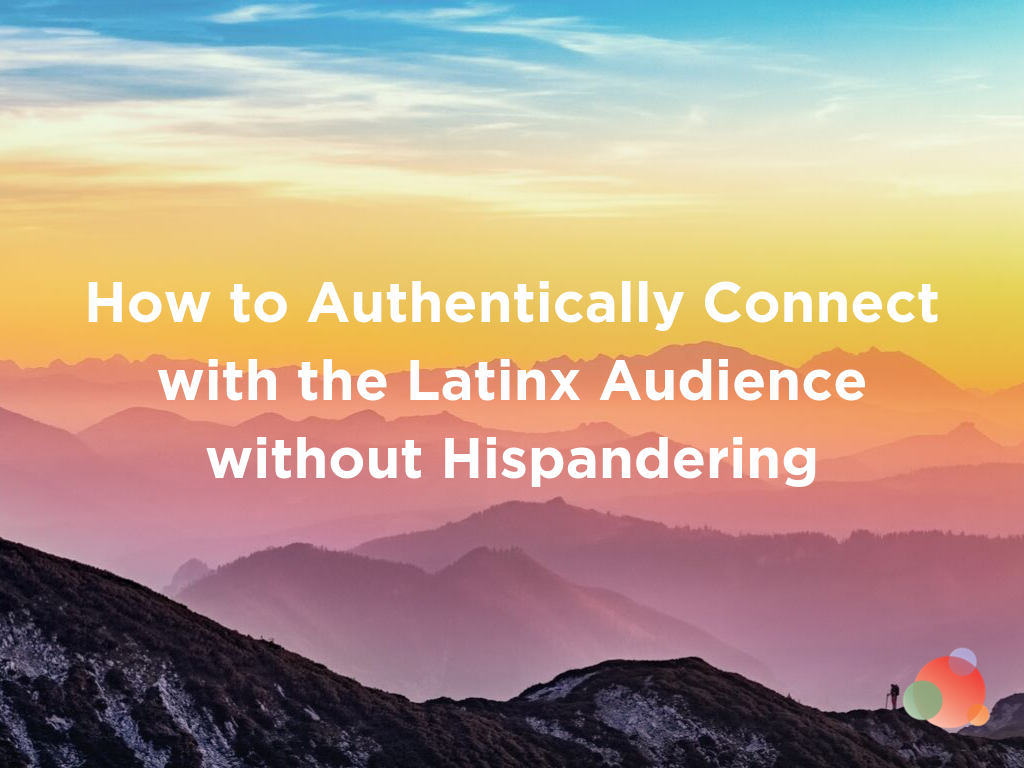 Happy Hispanic Heritage Month!, said no Latinx ever since 1968, when the month became a thing.

What may have begun as an honest attempt to celebrate and recognize the history and contributions of Latinos, has turned into a puzzling marketing bacchanal especially in the eyes of Latinx audiences.

“I frankly do not know what it means, what am I supposed to do with it, except that I think it makes them feel better, in some way. The main culprits—the media—who celebrate something they do not even understand.”

Recently, I heard from a mentor that the term “Hispandering”, as in to pander to Hispanic communities, may be unfamiliar to some.

This came as a shock because it’s widely used in Latinx communicators’ circles.

And if you don’t understand or know how to identify it, you risk missing an opportunity to connect with a growing community whose buying power is estimated to be $1.7 trillion.

Yet, there seems to be a disconnect between mainstream marketers and the Latinx audience.

Whenever a politician busts out Spanish but forgets to address any issues that matter to Latinxs … Hispandering.

She shared a good example of what she meant:

“Offering Taco Tuesday and Salsa Lessons at a corporate office, with 0% Latino leadership, or executive roles.”

I’ve already seen a plethora of postings from Latinx journalists and PR professionals lamenting this month.

I don’t blame them.

So far, even the best efforts haven’t been good enough.

As Julio Ricardo Valera, digital media director for Futuro Media, said when speaking of the way communicators relate to our community:

“Let’s stop giving credit to people who do OK work. There are deeper issues here. And we have to begin to be honest about that.”

Instead of another year of failed attempts of talking at “Hispanics”, let this be the year communicators across the world actually communicate with this unique audience.

Beyond stereotypes, that is.

No matter how respectful cultural signifiers may seem, if they lack substance, your audience will smell them a mile away.

If you are going to incorporate them into a campaign, do your research.

Be intentional and dig deeper.

Most importantly, be culturally sensitive.

No sombreros, no donkeys, no dancing tacos, por favor.

“I’m tired of seeing lazy jokes about plátanos. Yes, we like to eat them, yes they’re a big part of our culture, but we are so much more than that. I think we can have a deeper conversation about our cuisine and overall culture.”

Is your campaign having the more in-depth conversations needed to draw your audience in?

It’s not enough to add some Latin music to your playlist, switch your bananas for plátanos, and call it a day.

Then ask yourself, what does this mean for Latinos?

Then, go a step further.

Ask: “What does this mean for Latinos’ history in the United States and in Latin America or the Caribbean? Do I understand Latinos come from 25 vastly different countries with substantially different jargon and cultures?”

It may seem woo-woo, but asking more questions is the best way to start digging yourself out of Hispandering territory.

Many Voices, One Community

All successful communication with Latinxs starts with the premise that the Latino audience is layered and complex and wants to see that recognized.

For better or worse, this massive number of people from different countries and backgrounds have all been lumped into a single category.

It captures who they are, and at the very same time doesn’t.

Are they fully bilingual?

Are they descendants from Mexico, Puerto Rico, Cuba, the Dominican Republic? A mix?

And what communities in these areas are they from?

These things matter and should inform your approach.

One organization that seems to understand how to do this is AARP.

And for extra credit—they understand and speak directly to diverse audiences within the community.

They reach out to the older LGBTQ community, both supporting and actively participating in events that elevate their history.

Speak to the niche, and the rest will follow.

If you are considering jumping onto the Hispanic Heritage Month cycle, see it as one of many stops in the process of fostering honest relationships with this community.

Danny Rodríguez, an exec in an agency specializing in content creators of color says:

“Even though we are more than just a month in the year, I have hopes that we can continue featuring our accomplishments all year long …”

That’s precisely what Café Bustelo did last year when they tapped one of Danny’s clients for a campaign that included social activations.

And not only for Hispanic Heritage Month but also before and after.

By giving his client the freedom to use her own voice, the campaign effectively connected with the Latinx audience and beyond.

And that’s the thing, by thoughtfully engaging with one segment of your audience, you will captivate the rest.

In a shocking twist of events, it turns out the Latinx audience simply wants to be taken seriously, seen, and heard.

These are things we should be doing in all our PR campaigns.

Why Campaigns Directed at the Latinx Audience Fail

I am leaving the best—and to me the most important—for last.

Part of the reason campaigns fail is they lack the nuance a member of the Latinx audience (or someone deeply immersed in it) may have.

Or because Latinos at the table are not empowered to articulate and execute on what they know is the right direction for their community.

The best and fastest way to learn how to listen to and speak with Latinos is to fill our PR tables with diverse voices that include not just one token Latino, but many.

And with decision-making power.

It’s 2019, Latinos are a fast-growing group whose buying power continues to increase at a greater rate than any other group in the nation.

And yet, Latinos make up only 5.7% of the public relations industry.

We need to do better.

Ever the Pollyanna, and in the words of Cesar Chaves, yes we can.

How about you? Do you advocate for inclusion and diversity in your communications? How do you reach diverse audiences? Share your thoughts in the comments below.

Photo by Simon Matzinger on Unsplash

Suset cofounded Lalaboy PR, an integrated Public Relations firm that works with future-forward projects, people and brands inventing a more inclusive and creative world. She lives to give Latinxs and other minority groups (a term she hates) a voice, helping brands connect authentically with them. Ever since her grandfather started taking food off her plate without asking, she's been fixated with understanding what drives human behavior. Suset holds a B.A. in Sociology and History from Yale University, a Master’s in Latin American Studies from the University of Wisconsin and a PhD in History from the University of Pittsburgh, focusing on Latin America, the Caribbean, and the United States. Today, with her sister and partner, Maria Laboy, Suset wields communications in arts and culture as a tool for community building, change and social impact.

View all posts by Suset Laboy