I spoke last night at the Lake County Social Networking event that’s put on every month by Tim McDonald. If you live in the Chicago area and don’t already know about these events, check them out. Tim does a phenomenal job of making it fun and relaxed, but also informative and valuable.

Not my point. My point is that we talked a little bit about what we were hearing coming out of SXSW (not a lot, other than Holler and Google Circles) and it reminded me of something I saw that I think is pretty incredible.

First, enter Len Kendall. Len is a friend IRL and on Facebook and, as he was getting ready to go to Austin, he posted a photo of several moleskins and felt tip pens and I thought, “Huh. He still takes notes.”

What I didn’t know is this: He does more than take notes. He is super, super talented. So talented, in fact, he draws his notes. 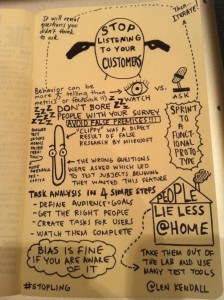 Is that not the coolest thing you’ve ever seen?

THEN. I happened to see a link from Ogilvy pass my tweet stream. They, too, were taking visual notes (in fact, they were distributing copies of the notes at attendee’s hotel rooms so they were there when they got up the next morning – waaaaay better than USA Today!). 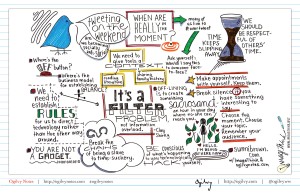 THEN. You know the red car syndrome? You never see a red car until you buy one and then, suddenly, EVERYONE has a red car? Well, that’s what is happening to me right now with visual note-taking.

Lauren Fernandez posted a link to recipes that are illustrated. Not in a Cooks Illustrated kind of way, but in a very visual, fun kind of way.

I’m reminded of the conversation we had during the live recording of Inside PR at PodCamp in Toronto last month. An audience member asked if we thought podcasting was going to explode, as we once thought it would, or if it’s going to remain where it is.

My thinking on that is that, as human beings, we’re very visual. We either learn visually or by reading (which, I suppose, in a way is visual) so it’s difficult for us to not only find the time, but pay attention, to a podcast. Now these drawings prove that thinking.

Isn’t it way more fun to learn about the sessions this way than to receive someone’s notes?

For more of Len’s (doodles, as he calls them, though what I do is doodle; what he does is so much more) and for more of Ogilvy’s illustrations, check out Posterous and Mashable, respectively.