At Social Brand Forum in Iowa a couple of weeks ago, I launched the Spin Sucks presentation.

Of course, it will be tweaked, modified, and customized about 1,000 times throughout the next 18 months, but the foundation was laid.

I started the presentation off by talking about the PR case study that is Miley Cyrus.

Love her or hate her, the launch of her new album was flawless.

I read somewhere the contract Miley Cyrus had with Disney was more strict than most parents.

It demanded her hair style, the color of her nails, how she wore her makeup, and the appearances she could make. I wouldn’t be surprised if it had a list of appropriate boys she could date.

She went through her teenaged years being told how to behave and not straying for a moment.

I don’t know about you, but I know if anyone had told me what to do as a teenager, I would have rebelled. (I once got grounded for the rest of my life because of my smart mouth. I didn’t do half the “bad” things my brothers did, but I’m still grounded, according to my mom.)

Can you imagine not being able to wear the clothes you want, hang out with the friends you want, or wear your hair the way you wanted?

Sure, there are certain sacrifices that come with being a celebrity and I’m not excusing how she shed Hannah Montana, but she had to make a statement.

The first layer of shedding the Disney character came during the VMAs a little more than two months ago.

By now we are all familiar with twerking, inappropriate gestures, using my boyfriend Robin Thicke as a jungle gym, and a Gene Simmons-like tongue.

We talked about that performance for weeks. Heck, we’re still talking about it.

When you’re selling sex, there is no such thing as bad publicity.

And that was only the beginning.

The VMA performance burned for a good two weeks before Miley gave her side of the story.

When it sounded like people were ready to move on, Miley did the following:

Any one of these things, if not executed well, would have been the end of Miley Cyrus. But they were executed flawlessly.

During her SNL performance, she said, “I’m not gonna do Hannah Montana, but I can give you an update on what she’s been doing. She’s been murdered.”

And a review of the tweets, post-performance, show people not only taking her side, but how some of the naysayers even changed their minds about the young pop star. 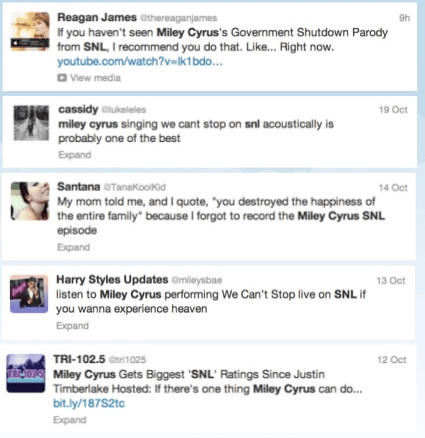 Love her or hate her, the PR case study is textbook and one which organizations should take note.

Miley Cyrus became the first person to simultaneously have a number one single and a number one album in the British music chart this year.

Wrecking Ball went straight to the top slot in the single charts and Bangerz, her fourth record, did the same on the albums side.

But that’s not all.

Wrecking Ball debuted in the number one spot on the Billboards and the album net the year’s biggest sales week for a solo woman and the second largest for a pop album.