We have a client who is really, really intelligent.

He has spent the last three years digging into the data for his organization.

He knows exactly how many people they need to visit their website to make one sale.

Fast forward to 2015. His goal for next year is to increase revenue by five percent. He backs it out from there and now we have a real number to use communications to increase website visits.

It’s pretty incredible to watch and I’ve learned a ton from him.

He’s also very good at leading the content marketing charge, based on what his prospect searches for online. But it wasn’t easy getting there. We’ve had three years of trial and error to figure it out and, of course, with every Google algorithm change, we have to update our strategy.

That’s okay because now we have a very solid strategy, but it sure would have been nice to have News Engine Optimization—or NEO—when we began this process in 2011.

News engine optimization is a new offering from AirPR that measures the online effectiveness of the messages we work so hard to create.

You know how you sit in meetings and ask questions such as:

Then you create a list of questions you think they’ll search to find you and go about writing content to answer those questions?

Well, now you will know without the guesswork!

Here is what AirPR has to say about it:

News engine optimization allows you to A/B test your key terms so you can optimize all future PR and marketing efforts. Organizations
can leverage the power of news engine optimization to gain insights into which key messages should be incorporated into everything from
investor and customer communications to media pitches. In the simplest form, it offers a deeper look into the behavioral
aspects of your messages, supported by data.

For demonstration purposes, AirPR used Virgin America as  an example.

Virgin America had an in-flight safety video they were touting. (If you haven’t seen it, I’ve linked up there ^^^^. It’s pretty great!)

Not just any video, though, as it has received nearly 10 million views on YouTube. 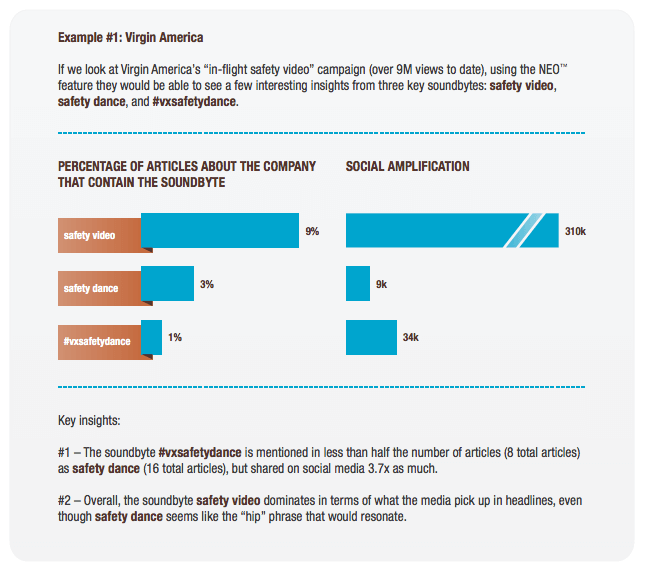 What they found is #vxsafetydance was not used in very many news articles, but it was shared on the social networks.

They also found the message “safety video” resonated, but “safety dance,” which they thought would be more hip, did not.

This tells Virgin that #vxsafetydance has the propensity to be shared more on social, which makes sense with it being a hashtag and all. They should use this on the social networks really heavily, but avoid using it in their more traditional media relations.

Likewise, journalists prefer to use “safety video” so the messaging should reflect that.

It’s pretty interesting that the Virgin team thought “safety dance” would be more compelling to journalists and customers.

I’m sure they sat in a meeting and talked about how they thought we would search for it online.

Part of our value as communicators, of course, is understanding which messages resonate with our audiences.

Until now, there has been no automatic way to do this. It’s all been anecdotal.

News engine optimization provides a way for you to show real data behind the key messages you’re using.

And now you don’t have to spend three years, like we did with our client, to get it perfect.