Super Bowl XLVII may be remembered for a few things: A highly-anticipated halftime show by Beyonce. Rumors about whether or not Destiny’s Child would show up to perform. Wondering if Beyonce’s husband, Jay-Z, would also take the stage. A 108-yard return by the Baltimore Ravens’ Jacoby Jones.

But mostly because the lights went out at the Superdome in New Orleans.

During those 34 minutes of “downtime,” the social networks were alive with jokes: “We’ve all had a blackout situation in New Orleans!” and “This is a perfect example of why the Clapper is not a good idea for stadium lighting.”

And then it happened.

The most outstanding move by a company in real-time we had yet to experience.

Oreo took the stage when they tweeted, “Power out? No problem.”

Which was accompanied by a black and white photo with the tagline, “You can still dunk in the dark.” 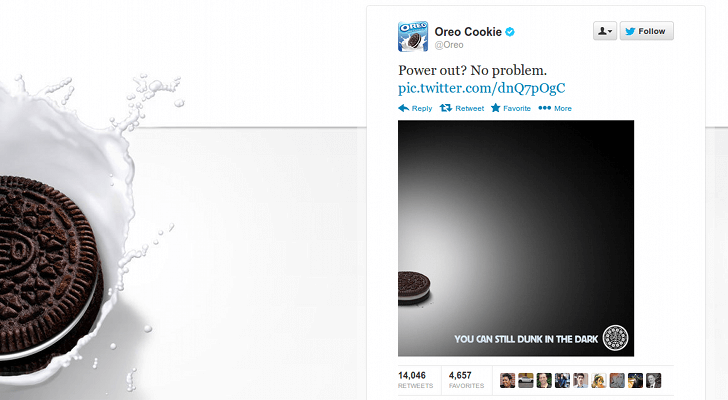 They were the first advertiser to tweet a response…in less than four minutes.

And it was brilliant.

This is what David Meerman Scott meant when he coined the term “newsjacking.”

Also referred to as real-time marketing, newsjacking is taking breaking news and injecting your company or brand in real-time to generate media coverage.

Since then, we’ve seen other companies try to duplicate their success…without much success.

Such was the case last week when the news about Robin Williams erupted the social networks with memories and real-time tributes.

In fact, I saw several Facebook posts that cued the countdown to the blog posts detailing the lessons you could learn from Robin Williams.

The first of such posts I saw was, “What Robin Williams Can Teach You About Career Transitioning” (which has since been deleted).

The blog posts and media pitches were so rampant, The Washington Post wrote, “The Worst Public Relations Pitches Pegged to Robin Williams’s Death.”

It describes everything from how his death leaves consumers at high risk of identity threat (whaaaaat?) and how Joyce Maynard knows how to talk about the elephant in the room (citing her relationship with J.D. Salinger) to physicians who treat mental illness and a psychologist who could talk about Williams’s “longstanding personality disorder,” though he’d never met the comedian.

Newsjacking Works…When Associated with Your Brand

I’m a big believer in using the news and pop culture in your content activities, IF IT MAKES SENSE for your vision, your editorial calendar, and your brand.

The vision of Spin Sucks is to change the perception people outside of the industry have about the PR industry.

To that end, everything we publish works toward that vision.

When Paula Deen had her big PR gaffe, it made sense that we blogged about it.

When Union Street Guest House got caught with their hand in the wedding cake, it made sense that we blogged about it.

When Kenneth Cole hijacked the Cairo hashtag on Twitter during the riots to talk about his new spring collection, it made sense that we blogged about it.

To try to capitalize on or create link bait with the death of our childhood hero is just plain, old wrong.

Meerman Scott says in his book, Newsjacking: How to Inject Your Ideas into a Breaking News Story:

You need to balance the need to be quick and bold with the imperative to be in tune.

As The Post so clearly articulates, most newsjacking last week was not in tune, which is why it didn’t work.

He also offers four simple rules you should heed:

“Especially where human suffering is involved.”

This goes to masses of people (don’t you dare run out and write “What Ferguson, Missouri Can Teach You About PR”) or to individuals.

Newsjacking is powerful, but only when executed in real-time…and only when it makes sense to your brand and it doesn’t try to capitalize on the death—or deaths—of people.

P.S. The Washington Post article came to me via Sean McGinnis. I’m telling you…he has an alert set up for “things that will make Gini go ballistic” and then he sends to me, pops some popcorn, and sits back to watch.