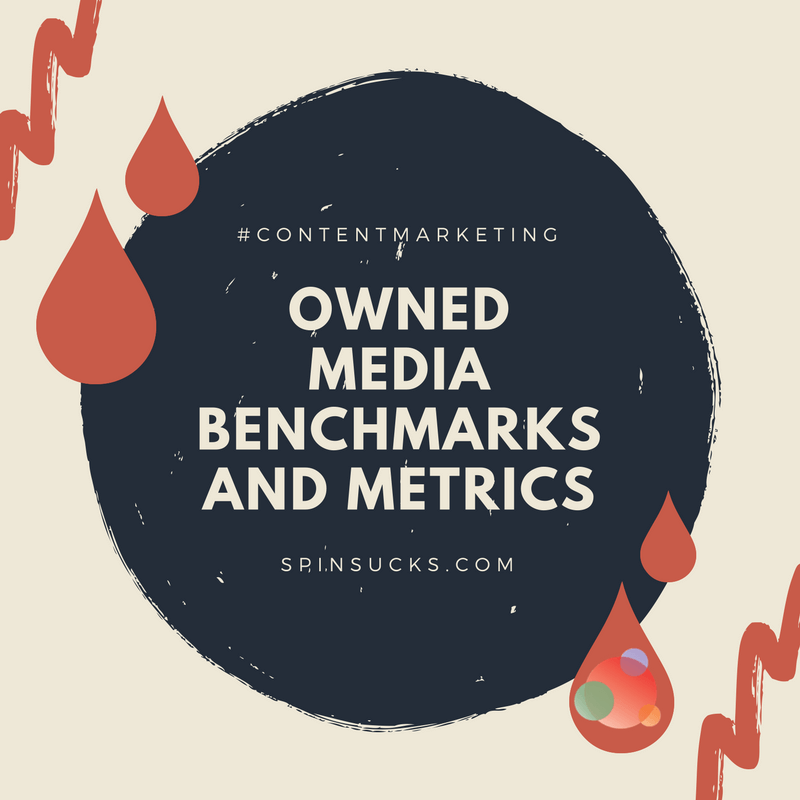 Yesterday, we had a nice conversation about what content marketing is and what it is not.

I really loved what Lukas Treu had to say in the comments:

I like to think that content marketing has been a “thing” long enough that we wouldn’t still be seeing misconceptions like this being perpetuated, but clearly that’s not the case.

Unfortunately, it is not the case.

As Joe Pulizzi said on last week’s This Old Marketing:

I just can’t comment on any of these (articles) any more because I think it’s silly.

Meaning it’s been long enough that we should be able to all agree content marketing is not a buzzword and there should no longer be misconceptions.

I would even argue owned media should be the starting point for any integrated marketing communications program.

So now that we agree content marketing is a thing and it should be the starting point, let’s talk about the benchmarks you should use to set your goals.

We do all agree, yes?

Bill Clifford, in the comments of yesterday’s article, said:

If you are not setting goals based on projected metrics and analyzing that data from your tactics, I don’t care what you call yourself or your tactics, the battle will be lost.

No matter what you call it—content marketing, owned media, chicken (as Robert Rose called it in the aforementioned podcast), we have to have a foundation for metrics to prove effectiveness.

The beauty of owned media—or content that lives on something you own, such as your website or blog—is it completely integrates with the other three media types, in the PESO model.

Alright, that may be a bit bold.

You certainly can have owned media without those three things, but it won’t be as successful if you don’t use those assets.

Here are the five benchmarks you should use to define your metrics.

I’m not so naive to think these don’t matter.

You should pay attention to unique visitors, time spent on the site, and bounce rate.

Those things, like an increase (or decrease) in social media followers, indicate success or failure.

But these are the tip of the iceberg.

While I can’t tell you what the number of visitors or average time spent on site or bounce rate should be for your benchmark, I can give you a place to start.

If you are going to benchmark, starting in April:

Have you increased or decreased from 2016?

This will help you determine where you should start.

If you don’t have data before now, take the next quarter to figure out your benchmark, but base it on growth from month-to-month in April, May, and June.

If you have an organized owned media program, you likely are distributing through email marketing.

When you integrate your content with this paid media tactic, you can track things such as click through rates, downloads, and shares.

Your benchmarks should compare to the same timeframes as the vanities above:

The industry standard for clickthrough rates is 2.73 percent.

If you are above it, bravo! Set your goal higher and keep going.

I had a meeting yesterday where we were trying to figure out how much traffic we thought a certain media outlet would bring us.

It was easy to set a benchmark by going into Google analytics, setting the date range for all of 2016, and looking at the referral traffic.

We discovered it was about 1,800 unique visitors every month last year.

So we set our benchmark at 900 because we have a two-week campaign upcoming with this outlet.

That’s not the goal—that’s the benchmark, which means it’s where we are starting.

What I love about referral traffic is you can do this with all of your contributed content, assuming you link to owned media on your site.

The Modern Blogging Masterclass teaches you how to do this, and how to combine earned and owned media for serious business results.

Having built a community of Crazies (I love you all!) and replicating that same success for clients, I can tell you an engaged community drives sales.

We track the effectiveness of your involvement through book sales (yay, ambassadors!), speaking engagement recommendations, client referrals, and ultimately through Spin Sucks students.

An engaged community indirectly drives a significant amount of our revenue.

In some cases, it will integrate with your influencer relations and brand ambassadors.

Admittedly, it’s fairly easy for us to track sales from our owned media because we’re a small organization.

It’s easy to ask people to tell us how they found us and follow their journey backwards to see which buying process they used.

That said, we know eighty percent (that’s 8-0 percent) of our new revenue starts with this blog and the buying process goes one of three or four ways.

We can help people make a decision by providing them the information they need in one of those processes.

To set your benchmarks, figure out how much your owned media efforts drove in revenue in 2016.

Maybe the answer is $0, either because you didn’t track or to work backwards and figure it out is too much work.

Write down $0 as your benchmark and then set your goal.

Depending on the type of business you’re in, the goal will vary.

If you have an engaged email list, you can feasibly say your owned media efforts will convert one to three percent of them.

Your owned media efforts will convert 10 to 30 of them.

Now let’s say you are a SaaS business that sells a product for $49/month.

While that likely isn’t anything to write home about, based on how much you’re spending internally on owned media, it gives you a place to start.

And then you integrate owned media into a PESO model and build from there.

This type of stuff usually makes the heads of communicators explode.

I am here for you.

What questions do you have…and how can I help?