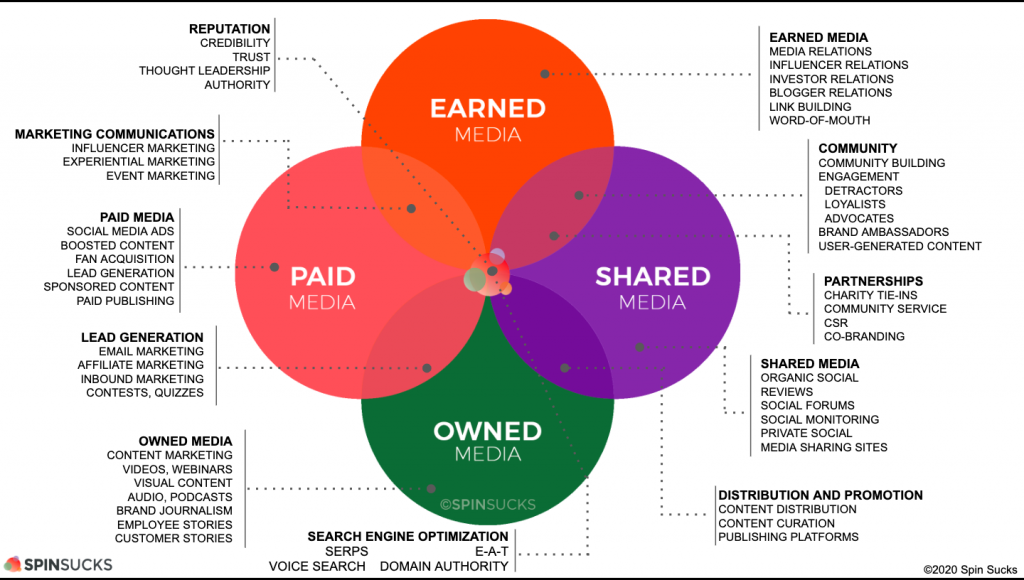 The role of the communicator is to adapt, to change, and to evolve…and never before now has that been more true.

Things are changing at lightning speed—one day you decide on a plan and messaging and it changes six hours later.

It’s a lot and we all have to figure out what to do and say on a dime.

As well, what people expect from their communicators is changing almost as fast.

Your executives or clients don’t always know what or how or when—but they expect you do—and you should.

We’ve talked a lot internally, with clients, and with other communicators about the need right now to add to our skill sets.

The PESO Model can help in all of these instances.

One of my favorite things to do is blogging.

I am a writer and it’s significantly easier for me to write than to create videos or even record the Spin Sucks podcast.

In some situations, blogging can be a powerful tool to bolster your communications or marketing strategy—particularly as the need to take a stand as individuals and as organizations increases.

But whether or not blogging is the right tactic for you, it’s important to understand that it fits into a much larger communications strategy—one that we developed: the PESO Model.

During the next several weeks, we’re going to talk more about the PESO Model, and how to use it to develop a communications program that will allow you to pivot your career, if necessary, change messaging quickly, and be measurable to an organization’s goals.

We’ll do a little refresher on the PESO Model.

We’ll break it into pieces, explain how each part works in connection to the other and show that an updated and effective communication strategy should create authority—both online and off, build awareness, and generate results for your organization.

Read Some Books to Help Your Thinking

Though it was the process we used internally at my agency for several years beforehand, the PESO Model officially launched in 2014 when Spin Sucks (the book) was published.

But before that, it was how we strategically handled every client’s business, no matter what their goals.

We’d  never written down the process or named it, but it wasn’t as complete as it was when I published the book.

Before I wrote the book, I read Traction: Get a Grip on Your Business, and learned how important it is for a service business to have a process. And, for branding purposes, to also have a name to go along with it.

As we began to outline the process we used for clients and think about a name, I read Built to Sell.

That solidified the idea that we had to get it on paper—once and for all—and use it to discuss our process with clients.

(Both great books, by-the-way, if you run an agency, even if you’re not planning to sell. If you don’t run an agency, I still recommend reading Traction because it will help you immensely with your annual planning.)

The PESO Model Is an Integrated Process

With those two books rattling around in my brain, I went to my team to see what we could do with the process we used for clients.

At the same time we were communicating it externally, we began to build the vision for Spin Sucks, which is to change the perception people have of the PR industry.

So I included it in the book, to teach communicators about the process and how to use it in your own integrated programs.

The idea behind the PESO Model is there are four media types that, when used together, create authority—both online and off, build awareness, and generate results for your organization.

You may lean more heavily on one or two of the media types—and that’s totally okay and normal—but you never want to forget about the big picture entirely.

The four media types are paid, earned, shared, and owned.

You aren’t going to become a jingle writer or Super Bowl ad creator (if we ever have the Super Bowl again, of course).

Instead, think about paid media from the perspective of a marketer or communicator.

It would include things such as social media ads, boosted content, fan acquisition, lead generation, sponsored content and paid publishing.

It covers what a lot of people assume is public relations—publicity or media relations or earned media.

They’re all the same, but public relations encompasses more than earned media, especially when using the PESO Model.

It encompasses organic social media, reviews on sites such as Yelp and Google, social forums, social monitoring, private social such as Slack, and media sharing sites.

Where the Media Types Overlap

But that’s not where it ends! You have other tools at your disposal when the media types overlap.

At the same time, the added benefit is competitors, peers, and competimates will make comments such as “Holy cow, you guys are everywhere!”

That is when you’ll know you’ve arrived.

You’ll begin to see results and be able to measure your efforts to business outcomes.

Think of the PESO Model as a Cohesive Whole

A good way to think of the PESO Model is as a cohesive whole: first, you’ll create your content (owned media), then you’ll use shared media to distribute it, paid media to amplify it, and earned media to rubber-stamp it.

This all sounds pretty orderly, right?

It always makes me laugh.

I actually don’t think a PESO Model program would ever begin with paid media.

It’s simply at the start of the acronym because PESO is easier to remember than “OESP” or “EOSP” or any other combination.

When drafting your own communications strategy, start with what makes most sense to your organization—and add the others in as they are applicable.

The best part about the PESO Model is that it’s fluid!

It evolves with us!

And, right now in a world where everything feels like it’s on fire, we need a process that allows us to adapt with the times.

The PESO Model does that.

I’d love to hear what your PESO Model mix sounds like—or if you need help figuring out how to use it or even to learn new skills to be able to adopt it.

And be sure to check out the PESO Model Certification we have with Syracuse University.

You learn how to effectively use the PESO Model and it comes with a certificate at the end from both Spin Sucks and the S.I. Newhouse School for Public Communications at Syracuse.

All without having to leave your desk—or spend your winters in upstate New York.