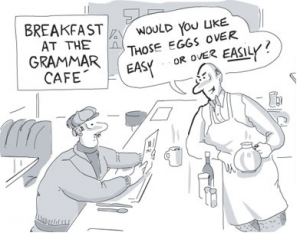 Last night I took an overnight international flight and had all of three hours of sleep. But the sun is rising in the United Kingdom and it’s already Wednesday while most of you are still sleeping away Tuesday.

During the flight, I had an amazing customer experience. I don’t know if it’s because the cabin crew for British Airways is that much better than American flight attendants or if it’s because I kept hearing “Ms. Dietrich” in that beautiful British accent. Maybe it was both.

And now, as I await my flight to Amsterdam from Heathrow, I am eavesdropping on conversations, that accent lilting into my ears like a Chopin concerto.

As the British speak to one another – and to me – I’ve noticed something really interesting: Their grammar is immaculate.

How is it Americans have become so lazy when we speak and write? We can’t blame it on texting; the Brits also text. Perhaps it’s just a cultural thing.

As I ponder this question, I’m reminded of an article written by iFixit CEO, Kyle Wiens. Titled, “I Won’t Hire People Who Use Poor Grammar,” it describes why he won’t hire anyone who “doesn’t know the difference between to and too.”

Of course, it makes sense. iFixit writes repair manuals so his people need to be good writers. Like Wiens, we won’t hire anyone who can’t write well. And, although everyone here writes very well, they are put through an intense editing process that makes them even better. Ask Yvette Pistorio how she, after working with us for several months, now feels about passive voice, prepositions, and punctuation.

But what about the rest of the business world?

Lynne Truss, the author of Eats, Shoots and Leaves, thinks anyone with poor grammar, “deserves to be struck by lightning, hacked up on the spot, and buried in an unmarked grave.”

While that might be going a little bit too far, it is time for every, single person who communicates via the written word in the business world to figure out the difference between there, their, and they’re.

The thing is, good grammar adds credibility, especially on the web. If you type “your” when you mean “you’re,” you lose instant credibility with your fans, followers, connections, clients, prospects, employees, and your mom. You’d better hope your ninth grade English teacher doesn’t follow you or your death might be imminent.

There are lots and lots of resources to help you, if you’ve forgotten your high school English. Truss’s book is the best; it belongs in every office in the world. You can also subscribe to Grammar Girl, buy yourself an AP Stylebook (or subscribe online), or buy the Guide to Better Business Writing from Harvard Business Review.

Now I leave it to you. What grammar tips do you have?

Thanks to Jeffrey Hill for the image.