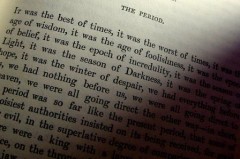 PR, Charles Dickens, and A Tale of Two Cities? Are you nuts?

Trust me, in some roundabout way, it will all come together.

It’s safe to say that Charles Dickens was the man.

He pioneered the ‘serialization’ of fictional literature, and, unlike many other early artists, was actually famous while he was still alive.

Dickens also did what we tell content creators in every field to do today: He wrote from the heart, and he wrote what he knew. He came from an impoverished background, and after his father was thrown in debtor’s prison (phew, thankfully those days are over!), he was forced to leave school, and work in a factory to help support the family. It’s no surprise that as an adult he fought for children’s rights and social equality.

Dickens’ A Tale of Two Cities is perhaps his most famous work.

The tale: “…the plight of the French peasantry demoralized by the French aristocracy in the years leading up to the revolution, the corresponding brutality demonstrated by the revolutionaries toward the former aristocrats in the early years of the revolution, and many unflattering social parallels with life in London during the same time period,” loosely (very loosely) corresponds to the tale of two cities I’m about to share with you, dear readers.

Minus the angry middle bits with the revolutionaries, of course.

So now, A Tale of Two Cities, PR style.

How two shop owners chose two very different ways to publicly address their business problems, and why, not surprisingly, the results for each were quite different.

In today’s modern retelling of A Tale of Two Cities, we replace “French” with Chicago.

Apparently, a Chicago peasant – oops! I mean store owner! – is fed up and downright demoralized by her treatment recently by the Chicago Aristocracy (also known as: The people who live in the neighborhood where her store resides).

In a recent article from DNAinfo Chicago, children’s store owner Katherine Dyon expressed her disappointment in the denizens of Southport. Don’t forget, these are her customers she’s talking about.

Using words like “snobby” and “privileged,” she told stories of mothers with attitude recruiting children to yell at employees, having merchandise thrown at her when sizes weren’t available, and how one disgruntled customer stood outside her door and advised potential customers not to enter.

Not surprisingly, the article’s comments section was a mishmash of “Yes, she’s right, the hood DID change!” to comments from other area business owners stating tactfully that working with the public inevitably brings annoying, difficult customers.

One commenter, who has spent decades in customer service, added, “I know nothing about Southport, but “snobby residents” are everywhere….I hope Katie B’s owner can be successful in another venue, but I wonder if she’s taken any responsibility in the way she’s been treated by residents and how her business has suffered.” Bingo.

Either way, it was a shocking attack on an entire neighborhood of people. And a definite black mark on her reputation as a future small business owner.

PR and Social Parallels with Life in London

Which brings us to the next modern city in our tale. Saltaire, West Yorkshire.

David Ford runs a local second-hand book store in Saltaire, and, between the rise of online book selling and some rather unfortunate roadwork issues during the all important holiday season, his store was suffering. Badly.

So, he took to Facebook, and made a public plea.

I put something on our Facebook site to say this is the reality of it, this is what we earn, to try and encourage people to use their local shops and services. I didn’t really expect any response, apart from a couple of likes, but it was a very positive response.

In fact, according to The Daily Mail, the response was more than just a bit positive. In fact, in just one day, his profits rose from his recent daily takings of just less than eight pounds, to a whopping 300 pounds (remember, this is a second-hand book store!). His customers rallied, and made a point to stop in, buy local, and help out their beloved book store owner.

David Ford is a PR dream. He was honest, humble, human, and transparent when he posted his accounts to Facebook. He asked his loyal customers for help. And help they did. His is the feel-good ‘small business’ story of January 2014.

On the other hand, Katherine Dyon is a PR nightmare. Whether her stories were true or not, she aired her dirty laundry, and came across sounding arrogant, entitled, petulant, and downright rude. The exact traits she lashed out at her shop customers for having.

I’ll give the last quote to Dyon, “Things just completely changed,” she said. “I literally could write a book on the stories that I have.”

I think she should. It just might end up in David Ford’s second-hand bookstore. And I don’t think Dickens is quaking in his boots at the competition.

Note from Gini: Dyon’s store is in my neighborhood. I’ve never met her – only her staff – but it’s a shame she has to close because of me and my rude neighbors. We’re clearly all jerks.