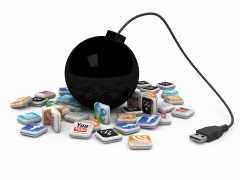 As a community manager, we’re used to disgruntled customers taking to Twitter to vent their grievances about, well, pretty much anything.

But this is new!

A consumer turned one of these grievances into an ad!

If you haven’t heard of it, I’ll recap it for you quickly:

Hasan Syed’s parents flew British Airways from Chicago to Paris, and realized one of their bags hadn’t made the trip.

To help his parents – and after the airline hadn’t responded in two days – Syed bought a promoted tweet to get the airline’s attention, and highlighted their lack of customer service.

Not only did Syed’s 400 followers see the tweet, according to Time, “50,000 other Twitter users based in New York and the United Kingdom that Syed paid to target” also saw the tweet.

British Airways took around eight hours to pick up on the offending tweet. And their response?

Not only did they take a long time to respond, they also wanted the customer to do work to figure out the problem.

And it just got worse… 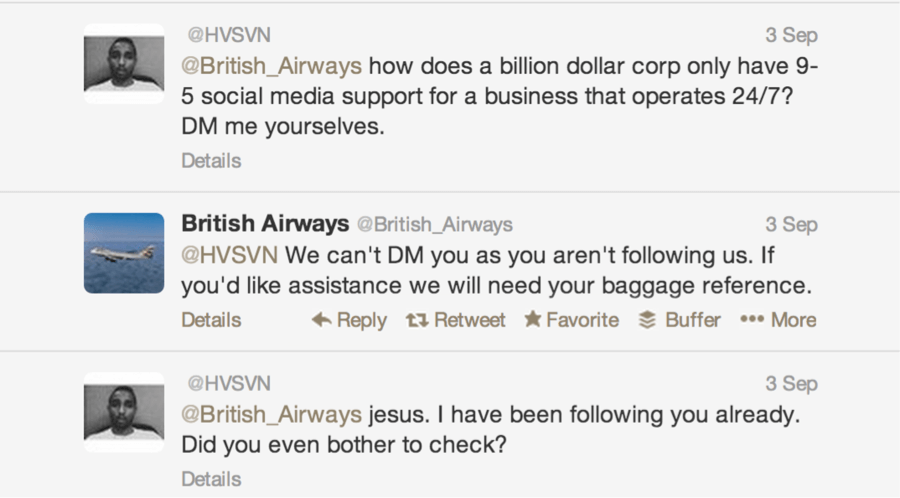 To be fair, it does say on the British Airways North American Twitter profile they only receive complaints from nine to five EST. However in today’s digital age, things happen – and can get out of control – REALLY fast during non-business hours.  And, if you provide a service 24/7, 365 days a year, shouldn’t you be available any time, day or night, for your customers?

Twitter is a place where customers expect a quick response despite the time of day. Unfortunately, it’s no longer a nine to five, and to my point above, especially if you are a global company that operates 24/7.

All Twitter shared an infographic from Tatu Digital Media to explore how social media crises are best managed.

Set up monitoring tools to help you manage your reputation. You can use free tools such as Talkwalker Alerts, or paid tools such as SalesForce. Either way, know what is being said about your brand at all times.

You never know when a crisis will happen, but you can be prepared for one. Define what is a crisis and what is not. During a crisis is not the time to decide what needs to be done and who is responsible for it, so plan for worst-case scenarios.

Establish a Clear Chain of Command

Who should respond? Know exactly who will do what in the event of a crisis.

Fix the issue in a timely manner, typically within a few hours. An eight-hour response time is unacceptable with the quick pace of social media. How you will fix the problem is dependent on what the crisis is.

Get to the Source

Go directly to the source and deal with the situation…and try to remain calm while doing so. Yes you should answer customer gripes on social media – but at some point, you need to pick up the phone and personally get in contact with your customer.

Go Back and Review

When it’s all over, go over what happened. How well did you handle the situation? Did it escalate to a bigger problem than it was? What could you have done differently? Was there any damage control that could be done afterwards?

As a community manager, I’m glad this didn’t happen to me! But we can all learn a lesson from the experience British Airways had.