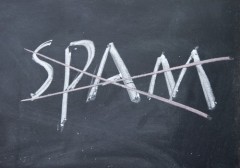 It’s always fun when a media outlet – such as the New York Times – takes a swat at the PR industry.

That’s exactly what they did a couple of weeks ago when David Segal, the writer of The Haggler column, wrote “Swatting at a Swarm of Public Relations Spam.”

The good news is he took a bigger swipe at the media list compilation companies than at PR professionals. The bad news is PR spam exists and, no matter how often it’s talked about, it continues to be a problem.

Segal began to see an increase in emails he was receiving at his NY Times address after the publication tweaked its spam filters.

Just like anyone who writes anything worth pitching (a column, a blog, editorial), his inbox was full of emails about an iceless, self-chilling glass,”Christmas Cookie Treat Boxes, or a document previewer called Igloo, or a liquor called Pura Vida Tequila, which “will be in the house this season at Qualcomm Stadium.”

And, just like anyone who writes anything worth pitching, he received emails not suitable for a man who writes a column about the plights in customer service. Things such as mortgage scams and moving company nightmares.

So he began to email the PR pros back, wondering where they got his email address.

They all responded with an answer to his question, and it was always Vocus, Cision, PRNewswire, or the like.

The story goes on to detail how hard it was for his name to be removed from the databases and he provides an easy way for those wanting out in the future.

He also provides his email address at the bottom of the article so, if you have a legitimate complaint for The Haggler, it’s fairly easy to find him. All you have to do is pull up a recent column and voila!

It’s Not the Tool

But it’s not really the fault of Vocus or Cision or any of the media database companies.

It’s the fault of the people using the tool.

How many of you have used a media list database?

How many of you have pulled that first list and sighed because it had hundreds of names on it?

How many of you didn’t do any work beyond that and just sent your news release to the entire list?

If you were raising your hands and any of you put your hands down at this point, I’d call you a liar.

At some point in your career, I guarantee every one of us has stopped at pulling the list and just sent the release.

Even I have done that … before I knew it was bad. Before the CAN-SPAM Act was put into place in 2003. Before people started talking about how bad it was.

We’ve all done it.

But today? Today it’s ridiculous that anyone do it. We all know it’s bad practice and it is PR spam, which is against the law.

I’d venture to guess I get upwards of 10 emails every day from PR pros who don’t have an unsubscribe button and are not sent only to me. I’d also venture to guess the number is at least four times that for Jason Konopinski, whose name is on this very blog as the person to pitch.

Yesterday, in fact, I received a media alert – it wasn’t personalized, it wasn’t targeted, there wasn’t an unsubscribe button – it was just the who, what, where, when, why in an email about the birthplace of Walt Disney being moved.

No, it’s not hard to hit delete and, sure, it’s easy enough to ignore. But when your inbox is full of this crap every day? It gets pretty frustrating.

(I also really love the ones that read, “You haven’t responded so I’m resending to hit the top of your inbox.” Those ones make me go mental.)

Now elevate that for someone who writes for the New York Times.

So What Do We Do?

Matt Wilson asked that question when he wrote about this topic in PR Daily.

Anyone who reads Spin Sucks regularly already knows the answer: Do your homework.

It’s not easy. In fact, it’s hard work and it takes a long time. When we’re paid for results based on our time, that’s asking a lot. I know it is.

But it always results in stories.

If you’re pitching a story about a new liquor being served in a football stadium, limit your pitch to food and beverage publications, football blogs, and local media.

If you’re pitching a story about Walt Disney’s birthplace, a good start is Chicago media, but then dig deep into that list to delete people from it. A blogger who writes about PR and marketing – even though she’s in Chicago – probably isn’t going to come to your event.

Your goal should always be to make your list as small as possible before you begin pitching.

If you approach it with that goal in mind, your pitching will be targeted, personal, and effective.