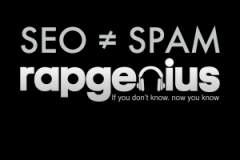 I grew up in the Golden Age of hip hop.

The ’90s surfaced some of the most enduring names in the rap game and introduced them to the world.

For hip hop fans, RapGenius is the Promised Land. Founded in 2009 as a lyrics and text annotation site, it lets users to input their own annotations and notes on song lyrics, biographical information, as well as seminal dates and places in the canon of rap.

Searches for popular (or obscure) song lyrics are one of the most commonly conducted web searches. There are scores upon scores of sites dedicated entirely to documenting song lyrics, Wiki-style.

Just short of a month ago, Rap Genius found themselves in a bit of a pickle for some less-than-ethical blogger outreach.

Portrayed as an affiliate program, the Rap Genius Blog Program was actually an attempt to manipulate search results with unnatural links.

Bloggers looking for exposure on a post were asked (nay – required) to backlink in exchange for promotion through Rap Genius’ social media accounts — independent of content.

It’s a shady tactic that absolutely runs afoul of the Google rules. Rules which expressly prohibit any willful attempt to manipulate PageRank to get a higher position in search results.

The links were designed to trick the algorithm and give Rap Genius a boost, thanks to all the referral traffic.

Rap Genius make its money through search traffic to its lyric pages, and their success depends largely on SERP position.

If you’ve ever searched for song lyrics online, you’ve probably noticed there are a lot of sites out there. They either sell advertising space (more traffic = higher CPM rates) or partner with ringtone publishers who charge a monthly subscription.

Sites like these are doing whatever they can to get on the first page, and sometimes that means trying to pull one over on our friends in Mountain View.

Google doesn’t take link-spamming lightly, and Matt Cutts’ foreboding declaration on HackerNews hinted what was next to come.

Google responded to the Rap Genius “campaign” with what is known as a “manual action.” The search giant delisted Rap Genius’ entire site on Christmas Day.

Think about the implications: Rap Genius no longer ranked for any of the lyric pages it had built up. They didn’t even rank for their very own brand name. During the manual action, you couldn’t find Rap Genius for any query until the fifth page of results — way deeper than anyone would look.

The site became practically unsearchable. For a site that absolutely depends on search referral traffic, the manual action by Google could have spelled the end.

No search traffic means no growth in users, no submitted entries, and no advertising revenue down the line.

Quantcast reported that Rap Genius’ traffic during the 10-day blacklist fell from nearly 700,000 unique visitors to around 100,000.

The rationale, stated Google, behind the manual action was “a pattern of unnatural, artificial, deceptive, or manipulative links pointing to your site,” which is exactly what Rap Genius’ anchor text links were.

Cleaning Up Their Act, Kinda

You’d think that a site smacked with this kind of Google penalty would want to make things right.

Black hat SEO is never a good idea. When you get caught, you really get caught.

Rather than issue a sincere mea culpa, the executive team at Rap Genius had something else in mind.

In a blog post published a few days after the manual action, they tried to out their competitors for engaging in the very same (or perhaps more egregious) black hat SEO tactics:

We effed up, other lyrics sites are almost definitely doing worse stuff, and we’ll stop. We’d love for Google to take a closer look at the whole lyrics search landscape and see whether it can make changes that would improve lyric search results.

If you scroll to the very bottom of the post linked above, you’ll see Rap Genius went so far as to hyperlink directly to each of their competitors, ostensibly to out them to Google.

Doesn’t sound like much of an apology, does it?

Tactics like the ones that got Rap Genius in trouble aren’t necessary for a company riding off a $15 million dollar investment. They’re sloppy and short-sighted. If you get caught, they can cost you big.

After Rap Genius cleaned up its low-quality backlinks (more than 177,000 of them, by-the-way), Google restored the site. However, traffic still hasn’t fully recovered to the days before the manual action. It might never recover.

Here’s something to consider: Delisting Rap Genius actually made the user experience for people searching rap lyrics worse. All the competing sites are heavily ad-sponsored and feel really, really spammy. Rap Genius’ site has lots of content, a vibrant community, and very active users. It is the destination for people seeking out obscure rap lyrics.

For rap cognoscenti, there simply isn’t another site and community quite like Rap Genius. So, Google nearly found itself in a Catch-22 of sorts. The company certainly wasn’t obligated to reindex Rap Genius after it purged all the spammy backlinks, but the alternative wouldn’t serve the best interests of web users.

Did Google make the right call here? I’m still not sure.