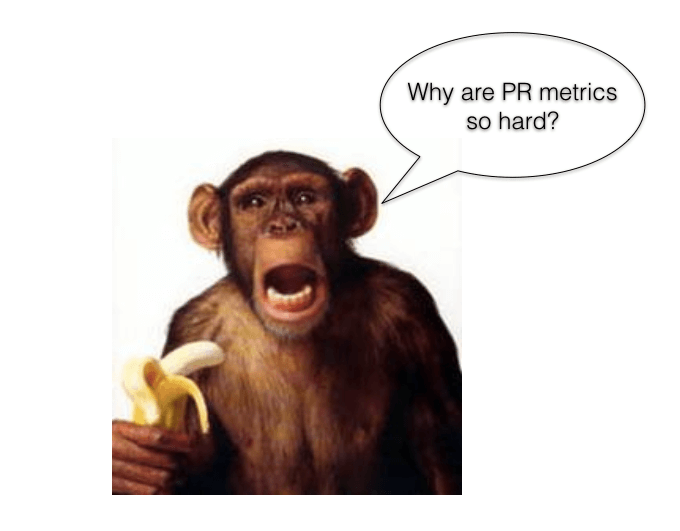 Modern marketing provides you with more ways to reach your customers than ever.

It’s a perfect storm for wasting your budget: Countless shiny, new tactics and a hunger to find a better way to drive demand and results.

Of course, the long-standing observation that “what gets measured gets done” is still true, but measuring the effectiveness of marketing initiatives isn’t just a best practice.

Even in companies with a culture of tracking and measuring, there’s a tendency to establish metrics after an initiative has already begun.

When you wait too long to track results, it’s like trying to pinstripe a moving car: It’s certainly possible, but you’re more likely to end up with modern art than a straight line.

Measurement before execution will help your team build the proper foundation for your project.

Here are three ways that establishing metrics beforehand can set your ideas up for success.

You should look at a marketing initiative as a way to achieve a defined, measurable objective. When you create a measurement scheme near the start of the timeline, you’ll force participants to focus on the goals first and the exciting tactics second.

For instance, a company that wants to attract younger customers might start its initiative with a specific tactic in mind (e.g., making a Snapchat account).

Instead, it should start its planning with a specific objective in mind (e.g., connecting with 500 18- to 24-year-olds by the end of the quarter).

When you concentrate on the objective, you have a much better chance of achieving it.

Marketing initiatives shouldn’t be judged in a vacuum. You should gauge them against other methods of spending your time and resources.

It’s not about effectiveness, per se, it’s about determining whether a tactic is more effective than alternative approaches.

After creating an upfront metrics scheme, you’ll be able to track the baseline data points to measure against.

For example, when you test a whitepaper and see that it’s collected new leads, you need to compare it to what you’ve done in the past.

You shouldn’t simply announce that you got 95 new leads from the whitepaper.

Instead, you should say, “We increased our monthly online leads from 75 to 95 when comparing this new whitepaper to the old one.”

Without a baseline, it’s impossible to determine if the new tactics work.

Admitting failure is extremely difficult. It’s natural to want to rally support for your own decisions to show that what you’ve done is wise and correct.

When you measure your results after the fact, it’s remarkable how often your initiatives look successful.

It’s so easy to select specific metrics that make a program look good.

It’s statistical gerrymandering, and it won’t guarantee a project’s success.

Rather, you need to set up predetermined success measures.

Instead of saying, “Let’s run some reports to find out how that program did,” you need to ask yourself, “Based on our predetermined success metrics, did our project achieve its objectives?”

It’s best to get a third-party or a separate team to measure the success or failure of your marketing initiatives.

If that’s not possible, it becomes even more critical that you establish and adopt a consistent measurement framework beforehand.

You need to put a metrics plan in place when your car is in park, not when it’s merging onto the highway.

Initiatives with clear objectives, context, and measurement benchmarks are more likely to succeed than those that lead with innovation.

It’s only after calculating ROI that you’ll be able to assess an idea’s true value.

Jay Baer is a renowned business strategist, keynote speaker, and New York Times bestselling author. He is the founder of Convince & Convert, a strategy consulting firm that helps prominent companies gain and keep more customers through the smart intersection of technology, social media, and customer service.

View all posts by Jay Baer