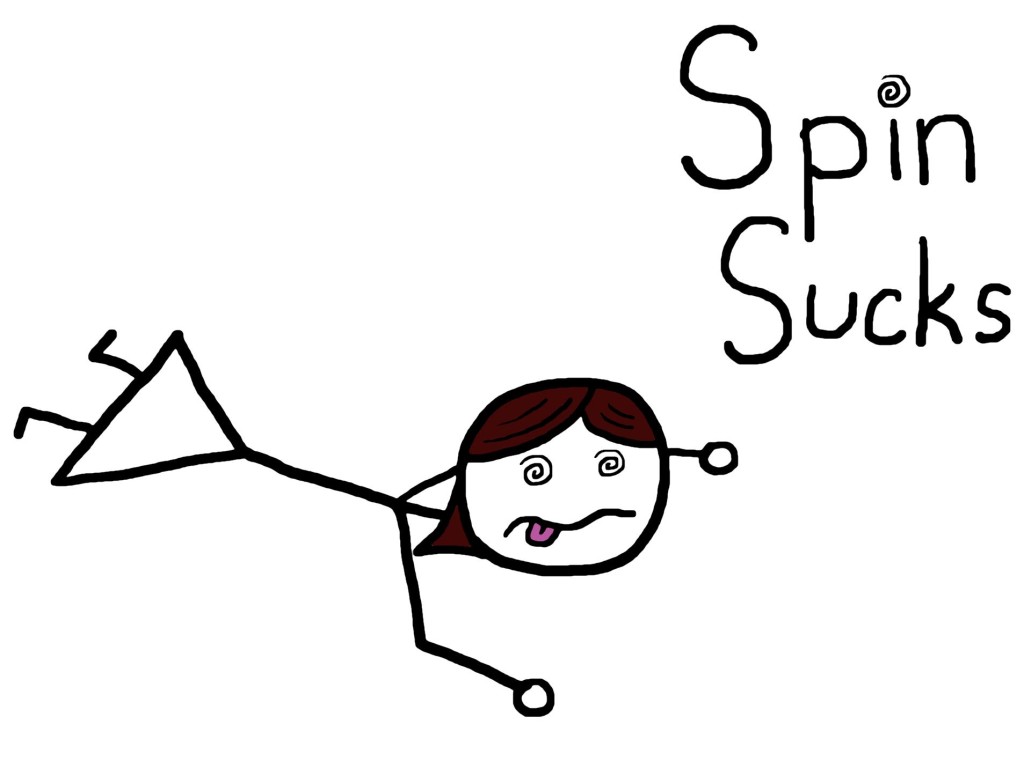 Spin Sucks gives public relations professionals the tools they need to evolve their careers while changing the perception people have about the entire industry.

Spin Sucks promises rainbows and unicorns if you read daily and a pot of gold if you share it with your colleagues.

There is a difference between positioning and spin. The former is the first sentence and the latter is the second.

Positioning is a sentence about your brand that tells customers what is valuable about your product or service, and why they need you.

Spin is stretching the truth or a downright lie.

Brand positioning is the ability to identify and occupy a market niche for a product or service using traditional marketing placement strategies (i.e. price, promotion, distribution, packaging, and competition).

Positioning is also defined as the way by which the marketers attempt to create a distinct impression in the customer’s mind.

It takes a look at the competition, where they serve customers, and the holes that are missing.

A great example of this is Basecamp, the project management software from Chicago-based 37Signals (yay, Chicago!).

They discovered there was a problem for small-and medium-sized businesses in using customer relationship and project management software because what existed was far too expensive and was built only for very large companies.

They also knew the web should empower, not frustrate.

They took on the big enterprise software solutions for both customer relationship and project management and also took on the frustrating parts about using the web – the costly servers, the tricky installations, the 24/7 technical support, and the slow and limited programming languages.

When Basecamp was released in February 2004, they expected to generate sales of $5,000 per month by the end of the first year.

They reached that target in six weeks and, earlier this year, they decided to stop supporting all of the products they’ve released in the past 10 years to focus solely on Basecamp.

They credit much of their success to their creation of tools that are simple and easy to use; the antithesis of everything corporate, costly, and tricky.

Their positioning continues to be one that creates a better customer experience; one that is simple, easy-to-use, and affordable.

In public relations, spin is a form of propaganda, achieved through providing an interpretation of an event or campaign to persuade public opinion in favor or against a certain organization or public figure. While traditional public relations may also rely on creative presentation of the facts, “spin” often implies disingenuous, deceptive and/or highly manipulative tactics.

What’s interesting is the entry goes on to describe things included in spin (some of which you’ll readily recognize).

Yes, even the non-apology apology is considered spin.

An Example of Spin

In early 2011, Kenneth Cole tweeted, “Millions are in uproar in #Cairo. Rumor is they heard our new spring collection is now available online at http://bit.ly/KCairo – KC.”

This was tweeted while protests were escalating in Egypt and was not only disrespectful, but completely ignorant.

The “KC” at the end of the tweet indicates Kenneth Cole himself – not a marketing intern or inexperienced professional – sent the tweet, causing an uproar of its own in the Twittersphere.

A couple of hours later, another tweet came from Kenneth Cole, with a pseudo apology – though you’ll notice the words “I’m sorry” don’t appear in the 140 character statement.

Tell Your Story Without Spin

The 2014 Edelman Trust Barometer shows the general feeling about organizations, while improved slightly from negative to neutral, is still one of distrust.

Of course, the lack of trust is higher among financial institutions and media, but it’s also weak among leaders and politicians globally.

The only way to build trust and slowly chip away at the general feeling the general public has about organizations is to develop relationships and provide educational and valuable information.

That information should help your customers and prospects solve the problems they are having – maybe it’s weight loss or work/life balance or perhaps it’s business growth or scaling more quickly.

Whatever it happens to be, harvest stories from your employees and your customers that humanize the company in order to sell.

Position your brand. Don’t spin. Don’t lie. Don’t stretch the truth. Always apologize when necessary (and there will be times it is necessary). And be a human being.

Portions of this were excerpted from Spin Sucks, the book. If you don’t already have a copy, what are you waiting for?!?