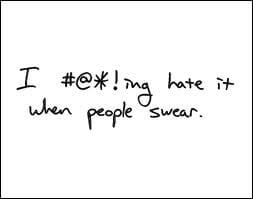 Last fall, I was in one of the biggest meetings of my career and we were talking about how Arment Dietrich could help this company.

The chief marketing officer was extremely curious about this blog, and about the book I was (at the time) writing by the same name.

He asked me if I’d ever had a problem gaining respect from the executives at the Fortune 50 companies because the word “sucks” is in the title.

It had never even occurred to me.

Sure, my mom didn’t like us using the word when we were kids…and according to an informal poll I took on Facebook, many of you said the same.

But as adults and used in the title of published material? I don’t see it as a bad word. In fact, it tells the story much better than Spin Stinks or Stop Calling Us Spin Doctors or We’re Not All Liars (not to mention it’s an easier URL to obtain).

One of the “rules” in our social media policy is that we don’t swear online or on this blog. We even have the filters set up to put a comment in moderation if there is a swear word in it…and we’ll edit it out.

It makes sense we’d use the word “sucks” instead of something more offensive.

Which is why it blows my mind this question came up during a new business meeting.

But, since then, we’ve had people unsubscribe to the blog because they can’t get used to seeing “sucks” in their inbox every day. And others have said they can’t write a review for their corporate blog or give the book to their executives (even though they desperately need to read it) because of the word “sucks” in the title.

I joke (but it’s half-true) that I’m a naive kid from Utah. Using the word sucks is so benign, it’s kind of comical.

But Some Media Outlets Do

And yet, according to the American Journalism Review, media outlets such as The New York Times, BuzzFeed, Associated Press, The Atlantic, The Washington Post, and more are now allowing swear words in print.

In “Swearing in News Stories,” the organization broke down the policies at four media outlets for allowing (or not) swear words in print.

The paper’s style guide was updated to leave more wiggle room for exceptions. Now, if the obscenity in question “is essential to the reader’s understanding of a newsworthy event,” editors are advised to “consider using the term or a close paraphrase.”

Likewise, other outlets are changing with the times and allowing editors to quote people if they use a swear word, rather than paraphrase.

The Name Spin Sucks Lives On

We will most likely never allow swearing here. I don’t see a need for it and think our language is a beautiful thing. There are words to describe what we mean without having to swear.

It bothers me that the AP Stylebook now allows words such as “impactful” and “over” instead of “more than.”

I love the English language (English major, FTW!) and I love our vocabulary. We don’t need to make up words or change the meaning of words to describe what we’re feeling.

Sure, there are probably other words to use in place of “sucks” here, but none that work as well for the message we’re delivering or the perception we’re changing.

It sucks that people think the PR profession is full of liars. It sucks that the perception of our industry is one of spin doctors. It sucks that, when you tell people what you do for a living, they ask you what you thought  of the Super Bowl ads this year.

Our industry needs to do its own PR and the vision of this blog is to help do that, to spread the word about ethical communications, and to teach generations of professionals how to capitalize on the latest trends and technologies.

Spin does suck and we will continue to sound the message.