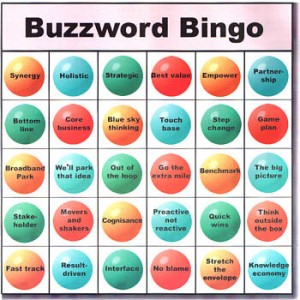 We used to play this game in the office that didn’t really have a name. I suppose you could call it Corporate BINGO, except we didn’t fill out cards or have winners.

We had a six foot whiteboard in the kitchen and, every time someone said (what we considered) some dumb corporate language, we’d write it down on the board.

Soon, things such as “at the end of the day,” “with all due respect,” “frankly,” and “win win” were listed (we had a client who said “frankly” so much, we never believed she was actually telling the truth).

In fact, we filled that thing up and then added big sheets of poster paper on either side to keep the game going.

I was reminded of it while I stood in line at security in Atlanta right before the holidays and overheard a man talking to one of his female colleagues.

Him: Hi Allison. I was hoping you can help me.

Him: I have an on-site client meeting tomorrow with 10 people and I need to order lunch.

Him: I know it’s not your job, but I have no visibility into how to order lunch. Could I send you the menus and have you help?

Her: (I don’t know what she said, but I was about to kick him in the shins. I wanted to say to him, “Have you ever ordered pizza? Then you have visibility into how to order lunch.” And, as if, because she’s female, she does have “visibility” into ordering lunch? But alas. I kept my mouth shut.)

“I have no visibility into how to order lunch.”

He really said that. And, of course, I posted it to Facebook. It also would have gone on our whiteboard as soon as I got back to the office (if we still had an office and weren’t virtual).

But, it turns out MBAs and wannabe executives aren’t the only professionals who speak another language.

According to a report by twelve thirty eight (which Tony Dowling so kindly sent to me a couple of weeks ago), PR professionals are the worst at using buzzwords that have no real meaning.

Each year they survey 500 journalists to find out which buzzwords, jargon, and terms PR pros use when working with them.

Words such as “awesome” and “super excited.” In fact, I have a journalist friend who is fed up with “amazing” (which, of course, makes me use it every other word when I email her).

Following is a list of the top 20 buzzwords compiled in the survey. The words or phrases in parenthesis is an attempt to define the meaning.

And one of my very favorites:

I loathe it when a business is described as “providing solutions.” We see this time and again and it tells us nothing.

You can download the survey and take a look yourself. Some of the examples the journalists use are downright hysterical. And some, you’ll be sad to notice, you’ve used (but, I’m willing to bet, never to use again).