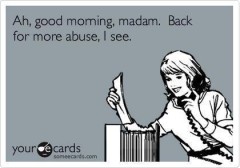 This is a public service announcement.

There is a terrible strain of the flu going around and it’s really bad. I don’t know what kind of rituals you do – flu shot, wear a mask, cross your fingers and toes, pray to the Saint who ensure no vomiting, or load up on vitamin C – but whatever it is, do it.

On Wednesday, after I got home from Louisville, I was feeling overly tired. I thought it was just from speaking and traveling so I went to bed at 7:30. I woke up on Thursday morning with a migraine.

Around 2:00 on Thursday, it hit me like a train. I got into bed and didn’t move until yesterday morning. I haven’t been on my bike, I didn’t go to the Bears game, I did nothing.

I tell you all of this to say three things:

In fact, rather than sympathy, I prefer snarkiness and cynicism. Or ice cream. I’ll take ice cream!

I will leave you with a video I shot with Jayme Soulati. She interviewed me in Louisville for her Soulati Media on the Street series and I may or may not have been making faces at her before I realized the camera was on. She’s such a good friend, she didn’t edit them out.

We talk PR, where the industry is going, and three things professionals need to consider, no matter what stage of their career they’re in.

Also, anyone reading this who saw me in Louisville…I’m sorry if you get sick. Let’s blame Jason Falls.