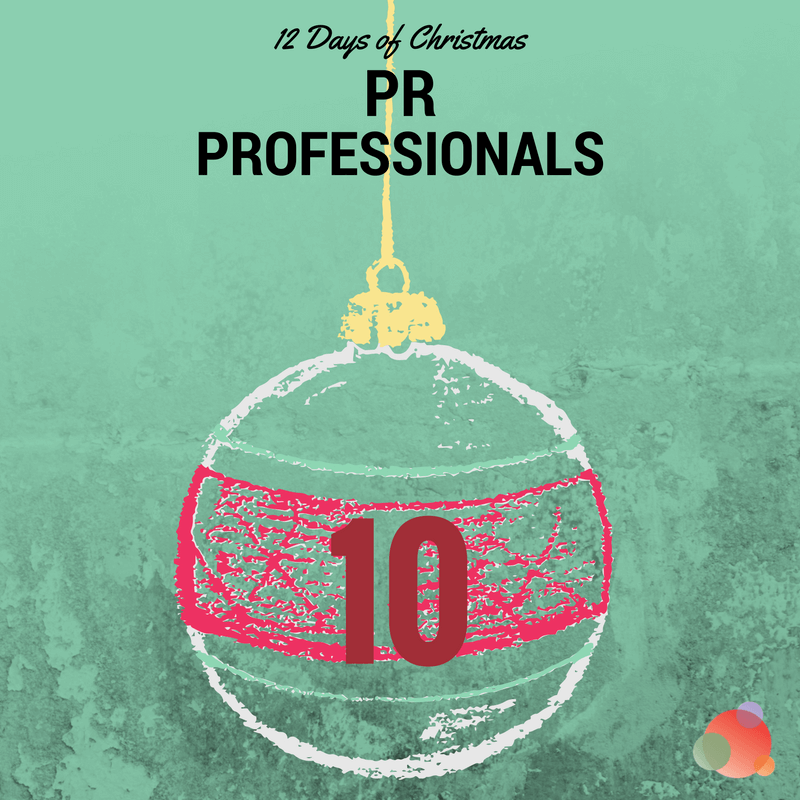 Last year, we featured PR professionals for you to follow, which were loosely voted on by me, myself, and I.

This year, I asked each of the winning winners to nominate one person for the list.

The thing I like the most about the PR professionals on this list is their diversity, from entrepreneurs and corporate communications to public affairs and agency owners.

You’ll enjoy learning a bit about each of them—and I hope you take the time to get to know them better in 2017.

Here they are, in alphabetical order.

This nomination comes from Abbie Fink.

I nominate Aaron Blank, president and CEO of The Fearey Group in Seattle.

Aaron and I know each other through our involvement with PRSA’s Counselors Academy and our agencies’ partnership through the Public Relations Global Network.

He is smart, willing to take risks and not afraid to speak his mind, even if it isn’t the popular approach.

He took the reins of a 30-year-old agency whose named partner was among the most-respected PR professionals in the Seattle market.

Without losing the legacy Pat Fearey had established, Aaron has energized and mobilized his team so the agency has maintained their diverse client base while growing and expanding into new markets.

And he does this while being an extremely involved father to three children and a dedicated husband to his wife, Lacey.

This nomination comes from Jason Mollica.

Ben is one of the most talented and brightest marketing minds I’ve ever met.

To be transparent, Ben and I are partners on an award-winning media pitching e-course.

I met Ben when he was part of PRSSA’s National Committee as vice president of public relations and immediately saw a young man who understood our profession and was confident in the direction of his career.

But he was also humble, a quality that has helped him immensely.

In a short amount of time, Ben has made Top Hat IMC a great success.

He is an entrepreneur and marketing communications professional specializing in branding, project management, and strategic business growth.

Ben has all the qualities we should all strive for: Being ethical, and trustworthy, and having integrity.

I’m not only glad to call Ben a colleague, but a trusted friend who I’m proud to say should not only be a PR pro to watch this year, but for years to come.

This nomination comes from Liana Miller.

She is one of the best kept secrets in our profession.

She started her career at Ogilvy & Mather, and, then had a 20+ year stint at Fleishman-Hillard, where she rose through the ranks, and just started a great gig this year at Sprint.

Lisa brings an extraordinary foundation of traditional PR upbringing, which I believe is so still critical for today’s PR/communications professional.

Yet, because of the clients and the work she’s done, she’s had to stay on the front lines of communications.

She is strategic, creative and really brings a secret sauce to any project that she works on. Journalists respect her. Clients love her. She navigates the new world of communications with savvy.

Finally, her talents extend far beyond PR: She is an extremely talented musician (of the rock and roll type). She’s moonlighted in a New Jersey cover band.

This nomination comes from Melissa Agnes.

My nominee may be a little unconventional, but here she is: Bridget Fitzpatrick.

Bridget is the social media coordinator at Omaha Police Department.

As a communications professional, Bridget helps the OPD with their community communications, but also helps other police departments in the nation manage the social media outfall that comes during and post-crisis.

She donates her time to help law enforcement better communicate with their communities in time of need.

This nomination comes from Eden Spodek.

We met at the annual in-person planning meeting in Chicago last month.

What really impressed me about Jenny, in addition to her outgoing personality and work ethic, is her plan for PR domination in Kansas City.

One way she stands out above the competition is with a unique service category she’s created called “Social Relations.”

Sure, many of us make connections and introductions for our clients but not like Jenny.

Her company takes it one step further by seeking people out who her clients should meet to help them further their business goals and making introductions.

Pro tip: Don’t ask either of us how to get to Midway on the “L” during rush hour.

This nomination is from Martin Waxman.

When Gini asked me to suggest a talented PR pro to watch in 2017, I knew instantly who my pick would be: Marcy McMillan.

Marcy is super smart, entrepreneurial, friendly, and able to navigate seamlessly between the traditional and digital worlds.

Since then, she earned a PR certificate, did an agency stint, was the marketing and events coordinator for York University, and recently started as social media communications coordinator for the Toronto District School Board.

She also has her own freelance business for independent clients, was named a PR in Canada 30 under 30, just completed her Digital Strategy Certificate from UToronto School of Continuing Studies! (OK, I was her instructor), and guest lectured for my PR students on getting started in the biz.

Whew! I am breathless saying all of that!

Marcy has boundless energy, is a talented writer and multimedia content creator, has a sharp sense of humor, understands relationships, and is always ready to help.

She is so talented, I’m almost a little jealous!

This nomination is from Shel Holtz.

Christopher Penn is the most data/analytics driven PR practitioner in the business today.

He is the reason SHIFT Communications, for which he’s a senior vice president, has become the first PR agency to earn a Google Analytics certification.

His posts on the SHIFT blog are always (and I mean always) worth reading.

This nomination is from Michael Smart.

You know how all these other industries are diving into Big Data and using it to rapidly identify what really works?

Aly Saxe is leading that charge for media relations.

Wouldn’t you like to know how your team’s pitching success rate compares with others in your vertical?

Aly will soon able to tell you that.

She’s a visionary who also WORKS.

She set aside the agency she ran to found IrisPR.

It’s going to do to PR what Salesforce did to sales.

She’s the rare pro who is not just the smartest person in the room, but also the hardest worker.

This nomination is from Susan Cellura.

I’m nominating Susan not just because I love her first name, which is cool, but because she truly is someone to watch.

I have had the pleasure of getting to know Susan via our participation in the Spin Sucks Pro Mastermind group.

And in November, I got to meet her in person where I was blown away by her smarts and personality.

As background, Susan’s firm focuses on consumer products and services, and she has heavy crisis expertise.

She helps you think about things from different perspectives. She’s always glad to network if anyone is looking for clients or solos in a specific profession.

The reason she is someone to watch is because while she’s been working in crisis communications under her own shingle since 1999, she’s taking on an exciting new challenge: Higher education communications.

Examples under this umbrella would be Title IX, controversial speakers, and campus rape.

I’m very excited for her as this is an amazing opportunity that she is taking on, AND she’s continuing to challenge herself—one I know she will rock.

It’s so easy to become stagnant when you have a successful business, but Susan has set new goals for herself and her team.

To me, this is a sign of a leader and identifies someone who I’d clearly want to work with on a project.

This nomination is from Rebekah Iliff.

In addition to building one of the fastest growing boutique firms in the country for early-stage and established tech startups, Kristen Tischhauser has managed communications for more than $300M in collective venture capital funding announcements.

She has also facilitated media coverage for more than 175 startups since the inception of talkTECH six years ago.

But beyond just that, she is invested heavily in giving back locally to innovators and young entrepreneurs.

She is involved with organizations such as Women 2.0, Girls Build L.A., and has taught PR workshops at General Assembly LA, and Coloft Academy.

She is also an advisor to University of California’s annual Silicon Beach Fest. Kristen was honored with Los Angeles Business Journal’s “Women Making a Difference” award and the L.A. Biz Award for “Women of Influence.”

She’s beautiful both inside and out, and is one of the hardest working gals I know…who never takes herself too seriously and always has time to listen!

And that, my friends, is a wrap on the 2016 PR professionals to follow!

Get to know each person.

Find ways to work together.

Grow your careers or your businesses together.

Network and have fun!