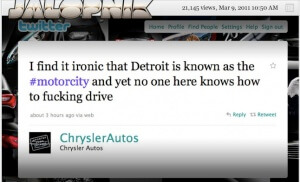 When I was 23, I was a freshly promoted account executive. I had just led a very successful campaign for potato farmers across the country. We created Franklin planners for them so they would not only be organized, but have all of the information they needed for controlling weeds, insects, and fungus in their fields. It was for BASF and it was so far out of my wheelhouse (other than I ate potatoes), it wasn’t easy to pretend I knew what I was doing.

But that campaign deemed my promotion and began my “from the farm to the fork” career. I was added to the Bayer Agriculture account to work on horticulture, having oh so much experience through my potato farmer work.

This was when websites were first coming to fruition so you had to include an address, a toll-free number, and a URL to all printed materials. It was my job to work with a trade magazine to write, design, proof, and print an advertorial. It was a big job – it was costing the client $60,000 for this one little piece.

I worked really hard on the advertorial – I wanted my bosses and the client to know that I deserved that promotion I’d just gotten.

And then the advertorial came out. It was gorgeous! I can still picture it. Heck! It’s probably still in a box somewhere in an old portfolio. I was really proud of myself and I knew I had earned that promotion.

And then my boss walked into my office and said, “Did you call the number on the back of this piece?”

My heart sank. I had not called it. It was a wrong number – I had two of the numbers transposed.

Frantically, I called the magazine (who hadn’t called the number either) and they said they only thing they could do was reprint which, thankfully, was in time before it ran in the publication. But, because they should have caught it too, they were willing to split the cost of reprinting with me.

I’ll never forget that feeling of being in my boss’s office, with the client on the phone, telling them both what the solution was. We all agreed it needed to be done and that the client wouldn’t be dinged for it. The conference call ended and I meekly said, “So what do you want me to do?”

She said, and I’ll never forget this, “You’ve done exactly what you should have done. We’ll eat this cost and I can guarantee you’ll never make this mistake again.”

She was right. I never have.

My 24-year-old, AE self is what I think about when clients get mad at someone on my team and ask for them to be removed from their account. It doesn’t happen often, but it has happened a few times. Clients have relationships with agencies and, sometimes, the person or people on the account, no matter how much or how little experience they have, just don’t jive.

Sure, we all make mistakes and sometimes the relationship doesn’t work, but I’ve never had a client tell me we had to fire someone in order to keep the account. If we did have a client who demanded that, we’d resign the account. I tend to get overly protective of my team even if, sometimes, they deserve what the client is asking.

But I also believe a client doesn’t run my agency. I do.

This is what I thought about when I read about the fateful F bomb tweet from a New Media Strategies employee on behalf of Chrysler last week.

When I heard the NMS employee was fired, my first reaction was, “Oh no! A client doesn’t get to determine whether or not an agency fires an employee.”

Plus, it definitely seems like  a mistake. How many of you have accidentally tweeted from two accounts? I don’t  personally manage more than my own account, but I know it happens. Heck! I’ve seen it happen. It’s a mistake. Should the person be using the F word in a tweet, no matter which account? No. Was it a mistake? Yes.

Then, as I began to dig into it some more, it began to look as though Chrysler didn’t demand it (maybe more suggested it) and NMS took the initiative on their own. Likely because they were afraid of being fired.

But then Chrysler came out and said they didn’t ask that the employee be fired, but they had made the decision to fire the agency.

More and more information is coming out about this. And we may never know the full story. We don’t know if the employee was on thin ice. Maybe the agency was on thin ice. Or perhaps Chrysler just overreacted.

The bigger issue, though, is that the agency is tweeting for Chrysler. Why aren’t they managing that one piece of their social media in-house?

They seem to have not missed a beat in their Twitter stream (even tweeting from SXSW this past weekend) so maybe they learned their lesson. And I’d be willing to bet that employee never makes that same mistake again. It’s too bad he/she had to learn the lesson by being fired.