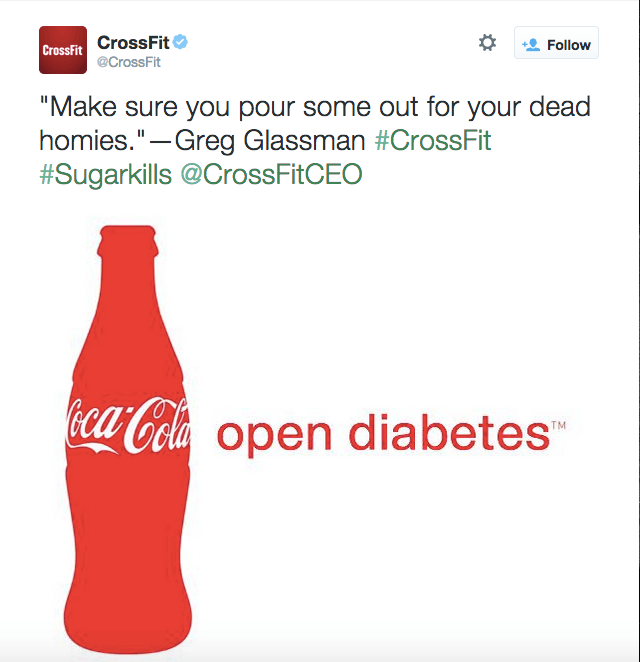 Last week a company I had zero opinion about previously, ensured I will absolutely never give them a single cent of my money: Enter the CrossFit PR nightmare .

This wasn’t through some huge story breaking about shady business ethics, or because of a quality issue with their product.

It was through a tweet, and the company’s response to those who had a similar feelings as I do about it.

I was diagnosed with type 1 diabetes when I was seven years old.

This is something I have learned to live with as part of my everyday life, and normally, it has no bearing on the decisions I make about where I spend my money.

CrossFit presented me with a rare situation where these two things intersect when they sent a disgustingly ignorant tweet that simultaneously propagated common misconceptions about diabetes and used the very serious effects of the disease as a punchline to a really amateur, lazy joke.

“Make sure you pour some out for your dead homies.”—Greg Glassman #CrossFit #Sugarkills @CrossFitCEO — CrossFit (@CrossFit)

The issues with this tweet are almost too numerous to mention.

First, it simplifies diabetes down immensely by saying it is directly caused by sugar, and/or sugar will kill diabetics.

As a diabetic, it’s already difficult enough to deal with the incredibly common misconceptions about my disease, and the confusion that many have about the differences between types 1 and 2.

Second, they followed up this tweet, and the public backlash against it, by sticking to their guns and calling out anyone who disagrees with them, the recipe for the CrossFit PR nightmare.

Instead of acknowledging the insensitivity of their tweet and apologizing, which would be their only real chance of redeeming themselves, they took a different route.

@ThePerfectDBlog @CrossFitCEO @CocaCola If insulting the sensitive can save some of the 1/3 of Americans who will get T2 diabetes, so be it.

Personally, I’ve never been very impressed with making jokes about people dying as a strategy for raising awareness about what killed them.

In this case, as someone who faces these issues, I wish I could have some words with Greg Glassman and try to figure out what world he lives in where this is a good use of his and the CrossFit time and effort.

I’d like to remind him that, according to The University of Arizona, those of us with type 1 diabetes have a mortality rate 5.6 times higher than the general public, and ask him what’s funny about that.

Good PR is Worth Extra Effort

Even if the tweet actually was in an effort to raise awareness about type 2 diabetes or not (I’m of the opinion that it wasn’t, and saying so is actually just one of the worst attempts at salvaging PR ever attempted), there are countless ways this CrossFit PR nightmare could have been turned around and raised awareness that wouldn’t have been so bafflingly stupid.

If CrossFit was actually concerned about diabetes past using it as a punchline, they could partner with leading diabetes foundations such as the American Diabetes Association or Juvenile Diabetes Research Foundation.

By doing this, CrossFit might have actually attracted new customers and maintained their reputation in a very positive light.

Any response other than the one CrossFit went with could have changed this situation for them, and at least stopped the bleeding before it got out of control.

IAC could have faced similar backlash following the Justine Sacco twitter incident, but instead, as illustrated by George Washington University, was able to prevent disaster by acting quickly, and in alignment with public outcry.

CrossFit doesn’t seem interested in the opinions of others, however. They would rather spend time flexing their corporate muscles, trying to look tougher than anyone who questions them.

It’s a rather fitting business model, but not a sustainable or healthy one.

The CrossFit PR nightmare has shown us it’s possible to insult and alienate a large group of potential customers in 140 characters or less, and that refusing to adapt and acknowledge mistakes is far more likely to rally people against you than bring them over to your side.

Good PR takes more work, but will always be worth it over the effortless idiocy we’ve seen here.