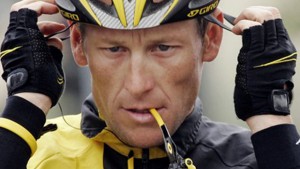 At the end of August, the New York Times broke the story that Lance Armstrong dropped his fight against doping charges and my Facebook and Twitter streams, inbox, and text messages were busy with, “What do you think?” and links to various articles.

I read, and responded, to them all.

And I defended the cyclist and creator of Livestrong.

My stance was, as a business owner, there have been many times we could have won a lawsuit in court (cough, Macy’s, cough), but our attorney very wisely advised to let it go because it would have put us out of business as we fought…just to prove we were right.

Sometimes you have to make decisions that are best for the health of the organization, even if it means – in the court of public opinion – it looks like you’re admitting guilt.

And that’s what I thought Lance was doing – not admitting guilt, but putting his focus on something else.

My entire life, my dad has been a cyclist. For many years it was out of necessity because we had only one car and a gazillion kids. But then he upgraded his bike, got into the Tour de France, and began to compete.

I started cycling eight years ago because, after three marathons and countless other races, my knee was scoped one too many times and the doctor said it was time to hang up my running shoes.

Between taking up cycling and Lance Armstrong and his Tour races, my dad and I had something else to bond over that wasn’t work or family.

I remember how much fun we had the day Lance was climbing a mountain and he looked back at the field, grinned, and rode up over the top to descend minutes ahead of his competitors. We still talk about that.

And now his Tour wins have been stripped. He had to remove “Seven time Tour de France winner” from his Twitter bio. And it all makes me want to cry.

It’s funny I’m this emotional about a person I’ve never met. It’s funny I want to cry at all the allegations that sure do make him look guilty. It’s funny I get so defensive when someone says, “I told you so.” (Heck, I get downright angry, not defensive.)

But the reason I’m writing it is because Lance – the brand (sorry, I know some of you don’t believe in personal brands, but he is one) – has a huge PR crisis on his hands.

I’ve thought long and hard about this. I’ve read everything that’s been written about it. I know his PR team is the best in the industry. I don’t understand why he’s silent.

Sure, I get anything he says, tweets, writes, Facebooks, or pins can – and will – be held against him in a court of law. His attorneys probably have him on lock-down.

But I have to believe they knew this was coming. There is one person you can be totally honest with when you’re in trouble…and that’s your attorney. Surely they have a plan for how to deal with allegations should they be made public.

And their PR counsel surely was ready for this, as well.

So where is he?

Other than changing his Twitter bio, he hasn’t tweeted anything in a week.

He hasn’t talked to reporters. He hasn’t posted anything on Facebook.

The court of public opinion is as important (if not more these days) as any court of law. He has more than three million Twitter followers. Imagine if just one of them, who believes he’s being made the scapegoat for an entire industry of dopers, were to end up on his jury.

If he’s guilty (I’m still not willing to admit it), he needs to come out and say so.

He already has former sponsors asking for their money back. He’s already lost Nike, Anheuser-Busch, and Oakley. He’s not allowed to race ever again. He was stripped of his titles. Livestrong is distancing themselves from him. It can’t get much worse.

Now he needs to come forward and say, “I did this. I’m sorry.” And let his fans know how sorry he is so we can all move on. Heck, so he can move on.

There isn’t a story once a brand apologizes. Say you’re sorry and let the media move on to the next big crisis.

I’ll still wear my Livestrong bracelet. I’ll still count Lance as one of my cycling heroes. And I’ll feel better finally knowing the truth directly from the horse’s mouth.