I’ve been thinking a lot about Ragu and the “crisis” they created by tweeting their video to social dads in a very offensive, and spammy, way.

Having read what C.C. Chapman (here, here, and here) and Adam Singer and Arik Hanson and Michael Schechter (on this very blog yesterday) wrote, I think everyone is missing the biggest lesson of all: Twitter is not a promotion and publicity tool. It’s not a sales tool. It is a social tool.

Granted, I’m not sitting in the room with Ragu and their agency while they decide their strategy, but based on experience, I can make an educated guess that they likely used Klout to determine who to target with their tweets.

And what do we all know about Klout? It’s a great FIRST step in determining influencers if you don’t already know who they are (and if you’re in PR and you don’t know who your client’s or company’s influencers are, shame on you!). But it’s NOT the way you develop your list and begin sending links to those perceived influencers.

Let me show you what I mean.

Following is their tweet stream the night this all broke loose. 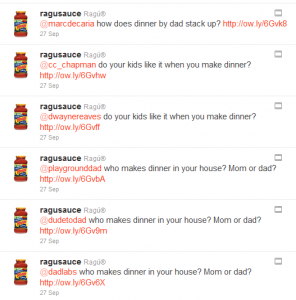 For those of you who use Twitter, do you see the problem?

For those of you who don’t use Twitter, how does this make you feel?

This is akin to standing in the grocery store, seeing a man walk in (with or without kids or even with or without a wedding ring on) and saying, “Who makes dinner in your house? Mom or dad?” and then throwing a jar of Ragu at him.

What do you think he’s thinking about you and your jar of Ragu as he hurries to his car, in fear of being accosted again?

It’s not good. In fact, he’s probably hurrying home to tell his wife or girlfriend or partner what a weird experience he, and every man in the grocery store, had with the people from Ragu.

Adam Singer said it best during a speech he gave this past spring: If you aren’t using the tools yourself, you won’t understand how to use them effectively for your client or your company.

So, the moral of the story to businesses around the globe, if you want to use the social tools to help build awareness and increase your sales, make sure you’re working with people who understand their use. It’s easy to discover whether or not they’re using the tools themselves because it’s all online.

Don’t just take their word for it. Do your due diligence. Find out what other successes, and failures, they’ve had.

It used to be companies hired PR firms for the relationships they had, or could easily create, with journalists. Now you hire them for their expertise not only in the digital world and integrating it with traditional tactics, but also in creating relationships with bloggers and influencers to match those with journalists.

Please, please, please make sure the experts you’re working with understand, and have relationships with, the influencers you want to target. And that they understand how each tool is used differently, but in an integrated way.

That will help you avoid some of these issues.