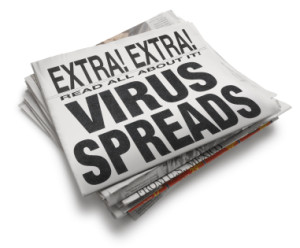 During the recent Boston Marathon tragedy and ensuing chaos, a friend of mine made a comment about content.

It went something like this: “The first time I see a blog post titled ‘What I learned about business from the Boston Marathon Tragedy’ I’m going to gouge both my eyeballs out with a dull spoon.”

I’m pretty sure there were lots of swears.

Whether it’s a high profile death, a world tragedy, the Oscars, a sporting event, or a political firestorm, you usually have about .02 seconds before it’s time to get that spoon out of the cutlery drawer and commence gouging. Let’s call it event-jacking.

There are many reasons it’s done. And yes, some are sincere. Many people find writing cathartic after hearing bad news. But if I were a betting man (er, woman?), I’d bet money the majority of the people writing those posts have something to sell, and are capitalizing on the raised profile of certain keywords, as well as the increased share’ability of any content relating to the current calamity du jour.

Readers are getting pretty fed up with them. As one online commenter said about a recent Boston themed post: “Analogies are only good when they are accurate. Linking…this terrorist bombing to some silly social media scare is disrespectful and insensitive, but it’s also a testament of what’s wrong with the SEO-driven conversations.”

One post I haven’t seen yet is ‘Three Business Lessons Learned From Bell’s Palsy,’ so I decided to write one (ok, there’s probably one or two out there, I didn’t actually do a search). It’s not disrespectful, nor insensitive, and I figured it was just kooky enough to work. I also figured most of you wouldn’t come down too hard on me for writing it. Because, hey, you can’t make fun of a gal with Bell’s Palsy, can you?

So, without further ado, and for a bit of fun, here are three business lessons learned from Bell’s Palsy:

1. You never know what a new day will bring. Bell’s Palsy is a sneaky little ailment. You just…wake up with it. You go to bed thinking everything’s hunky-dory. And you wake up  having lost movement in half your face. Business can be exactly the same. For argument’s sake, imagine this scenario: You’re humming along, tickety-boo, only to wake up one morning to find your latest ad campaign has tanked overnight.

It hasn’t only tanked, it’s causing outrage across all digital channels. Do you sit there, paralyzed? No you don’t! You deal with it – immediately. Not tomorrow. Not later in the afternoon. Because like Bell’s Palsy, there’s a very narrow window of time when it comes to addressing a problem. And the faster you ‘medicate’ it, the faster it will heal.

2. Go public as soon as you can. The minute I realized my face was oddly disabled, I posted a snappy status update about it. Because I’m a card-carrying hypochondriac, I was about 99 percent sure I wasn’t having a stroke. I know all the symptoms of stroke (doesn’t everyone?). But, it was helpful to have people showing concern, giving guidance and advice, and recommending a course of action to take.

In business, it’s no different. Your social channels will help you respond and react to a brand fiasco directly and in real-time. Heck, FedEx might be the all-time winner of the “fall on your sword” award, when their senior vice president of U.S. operations took to YouTube to apologize for a rather creative delivery method. It was real, honest, and spoke directly to their customers. Responding quickly to online negativity soothes the savage  consumer – you might even find some folk who are on your side and want to help. It will also buy you a bit of time to get your disaster plan up and running.

3. Sh*t happens. ‘Such is life’ is pretty much my motto: So much so I’ve inked it on my left wrist, as a daily reminder. When something happens to upset the apple cart, deal with it, learn from it, and move on. With Bell’s Palsy, I decided to just maintain perspective – I’m not dying! – and attack it with humor. I encouraged people to laugh at my expense, and joke with me. Yes, I was embarrassed, and felt I looked and sounded hideous, but the only option was to face it head on, be open and upfront about it, and share the process.

Same with a PR nightmare. It happened, it’s ugly, but now you need to quickly deal with it, learn from it, and move on from it. Humor helps (as long as you’re careful). Rally the troops, get support and advice from friends and peers, talk to other people who’ve been through the same thing, be open and upfront about what happened and why, and share the steps taken to address it with your customers and others.

The healing process involves being patient (which I most certainly am not), and waiting it out. It might take awhile for your particular marketing mistake to heal, and your brand to recover, but be patient, the tides will soon turn. In my case, improvement has been slow but steady. And slow and steady wins the race.