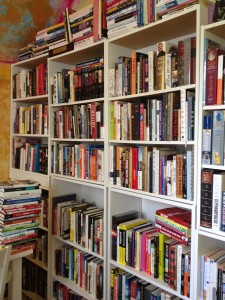 If you read this on Margie Clayman’s blog, it won’t be new to you so you can either skip to the comments or go on about your day. But if you didn’t, I throw down the challenge to you, as well.

Last summer I challenged Margie Clayman to write a blog post of her 10 favorite books.

She did. And she cheated.

Instead of her 10 favorite books, she wrote her favorite genres: Books about Abraham Lincoln, books about the civil war, guilty pleasure books, etc. Sure, there were only 10 categories and it was a really good list, but it was cheating none-the-less.

When I teased her about it, she challenged me to write my own top 10 list. It’s taken me 10 months to accept her challenge, but here I am!

It’s a good thing I waited, too. Because when she challenged me, I hadn’t read Fifty Shades of Grey yet and you would have missed out on three of my favorite books.

I kid. That was a terrible series. I’m mad at myself for reading all three of them. I have this really bad habit of having to finish everything I start. And that includes terrible trilogies.

Following is my real list of my 10 most favorite books of all time (in no particular order).

So there you have. I’ve put my stake in the ground and these are my 10 most favorite books. What are yours?