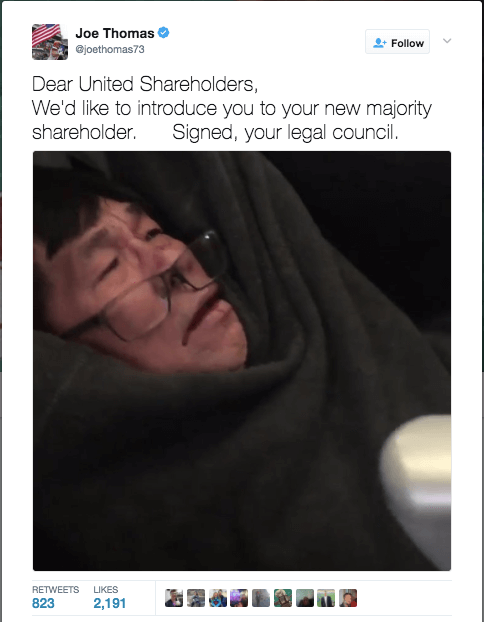 Those of us who live in glass houses.

We become very, very good at it, particularly when Pepsi or Sean Spicer or United Airlines do something wrong.

And that was all just in one week!

At the same time, the forthcoming Big Question is about what constitutes an apology in crisis communications, which has made for great Twitter conversations this week.

This first statement from Oscar Munoz the CEO of United Airlines, over a man being forcibly dragged off a flight on Sunday night, does not constitute an apology:

This is an upsetting event to all of us here at United. I apologize for having to re-accommodate these customers.

I know people who work in the communications department at United.

The airlines also are represented by Edelman, which has professionals who know what they’re doing when it comes to crisis communications.

The two are very smart and very savvy.

They know how to craft a real apology.

This smacks of not involving their communications counsel at all or, worse, not listening to them.

A Day Too Late

This “apology” came yesterday, but hours later he sent a letter to employees lauding the behavior of the flight crew.

He said the passenger was “disruptive and belligerent” and the flight crew did exactly as they should.

Under intense fire, Munoz apologized a second time yesterday afternoon for his initial response and email to employees.

That apology was more in line with what should have been released on Monday.

The truly horrific event that occurred on this flight has elicited many responses from all of us: outrage, anger, disappointment. I share all of those sentiments, and one above all: my deepest apologies for what happened. Like you, I continue to be disturbed by what happened on this flight and I deeply apologize to the customer forcibly removed and to all the customers aboard. No one should ever be mistreated this way.

I want you to know that we take full responsibility and we will work to make it right.

It’s never too late to do the right thing. I have committed to our customers and our employees that we are going to fix what’s broken so this never happens again. This will include a thorough review of crew movement, our policies for incentivizing volunteers in these situations, how we handle oversold situations and an examination of how we partner with airport authorities and local law enforcement. We’ll communicate the results of our review by April 30th.

I promise you we will do better.

I’d like to compare this with the way Southwest Airlines handled their power outage crisis last July.

During the course of four days, Southwest posted eight updates on their community blog.

In every update, they included photos and videos of what they were doing to fix the issue.

They even said things such as:

It’s never too early to say thank you or to extend an apology; neither is it to continually apologize when a situation hasn’t been fully resolved. I’m sorry. We’ll continue to work to make this right.

Though it wasn’t an operational or policy issue, it was an issue that could have been avoided—and they owned that.

They were updating their community blog and they had multiple Facebook Live videos during the crisis timeframe.

We are all human. We make mistakes. Things go awry. It’s how we handle ourselves that makes the difference.

Look at the difference between how the two airlines handled themselves.

It’s Imperative Communications Have a Seat at the Table

When you have an operational policy that can create this kind of trauma, crisis communications counsel HAS to be brought in.

Imagine the crisis communications planning session where they could have reviewed these policies.

Surely someone would have said, “What happens if we have to forcibly remove someone from a plane?”

You prepare for that.

There is one thing that drives me crazy about this, though: This is not a PR issue.

It becomes a PR problem when the CEO either puts more weight on what general counsel says or he doesn’t listen to his crisis communications counsel.

As my friend Abbie Fink says:

Crisis communications professionals must be at the table when decisions are being made.  We can provide an objective opinion and guide discussions around the possible outcomes of those decisions.  Trust me; you want us there beforehand, because you are going to definitely need us after.

Is it Time to Fire the Client (or Quit Your Job)?

So then comes the time when you, as a communications professional, have to decide if you are going to continue working with an organization, either as an employee or as an outsourced partner.

If you are even invited to sit at the table (and most often we are not), are you able to work through scenarios where the operational policy could backfire?

Does the CEO listen to what you have to say?

Do you have a great working relationship with general counsel?

Can you get statements approved fairly rapidly (within the hour)?

Do you have freedom to respond directly to angry customers on social without days of approvals?

Is your counsel trusted?

If you answer “no” to any of these questions, though we all try to close—and keep—more clients, it may be time to fire your client, or quit your job.