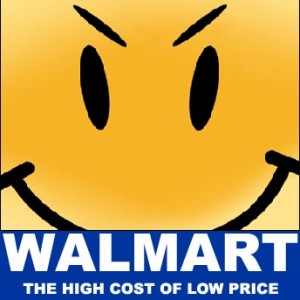 You know how we talk about transparency on the web?

As in, if you’re working with a client and you promote their products or services, you need to disclose it? Or, if you’re doing the same on behalf of the company you work for, you’d better be darn sure it’s indicated that you work there?

In fact, according to the FTC, it is required to disclose your relationship with the company you’re promoting.

But you know what? This goes for offline, too. We’re in an age of transparency and faking it doesn’t cut it.

Enter Wal-Mart and Their PR Firm

You likely heard the news earlier this year that Wal-Mart allegedly covered up the bribes they paid Mexican officials in exchange for getting building permits faster and other favors to help it aggressively expand in the region.

Well, it seems they’re at it again. This time in Los Angeles.

They want to open a store in Chinatown, but like they did in Chicago, the unions are putting up a pretty big stink in opposition of it, complaining of unfair working conditions.

One of the unions, Warehouse Workers Union, held a news conference on June 6 in which a young woman named “Zoe Mitchell” posed as a University of Southern California student who was a school reporter and “storyteller at heart.”

In fact, she conducted a 20 minute interview with a warehouse worker about low wages and tough conditions in his job, recording the entire conversation.

No harm, no foul, right?

It turns out “Zoe Mitchell” was at another news conference later in the week, where an activist pointed out she was not, in fact, a reporter, but an employee for Mercury, the Wal-Mart public affairs and lobbying PR firm.

The managing director for Mercury was swift to issue a statement:

This action was in no way approved, authorized, or directed by Wal-Mart or Mercury. This young woman is a junior member of our team who made an immature decision. She showed very poor judgment, and Mercury takes full responsibility. We are taking the necessary disciplinary actions. This is an isolated incident that has never happened before and will not happen again.

From all accounts, it looks as though the young woman has been fired.

Our culture of integrity is a constant at Wal-Mart, and by not properly identifying herself, this individual’s behavior was contrary to our values and the way we do business. We insist that all our vendors conduct themselves in a way that is transparent and honest and we will reinforce that expectation to ensure this type of activity is not repeated.

Except the culture of integrity seems to be fabricated, as we’ve learned from the Mexican bribery scandal.

I was waffling on whether or not this young lady did this on her own accord, until a friend and former colleague reminded me, after he left Arment Dietrich, he went to work for a firm that required their employees to do unethical, and sometimes even unlawful, things in order to keep their jobs.

Perhaps she did act on her own accord, thinking she could get ahead at work if she got information from the union workers that would be helpful in their fight to get Wal-Mart into Chinatown. Or perhaps she was told to do it by a supervisor who now has thrown her under the bus.

Disclose everything you do – online and off. Not only is it the right thing to do, it’s the law.