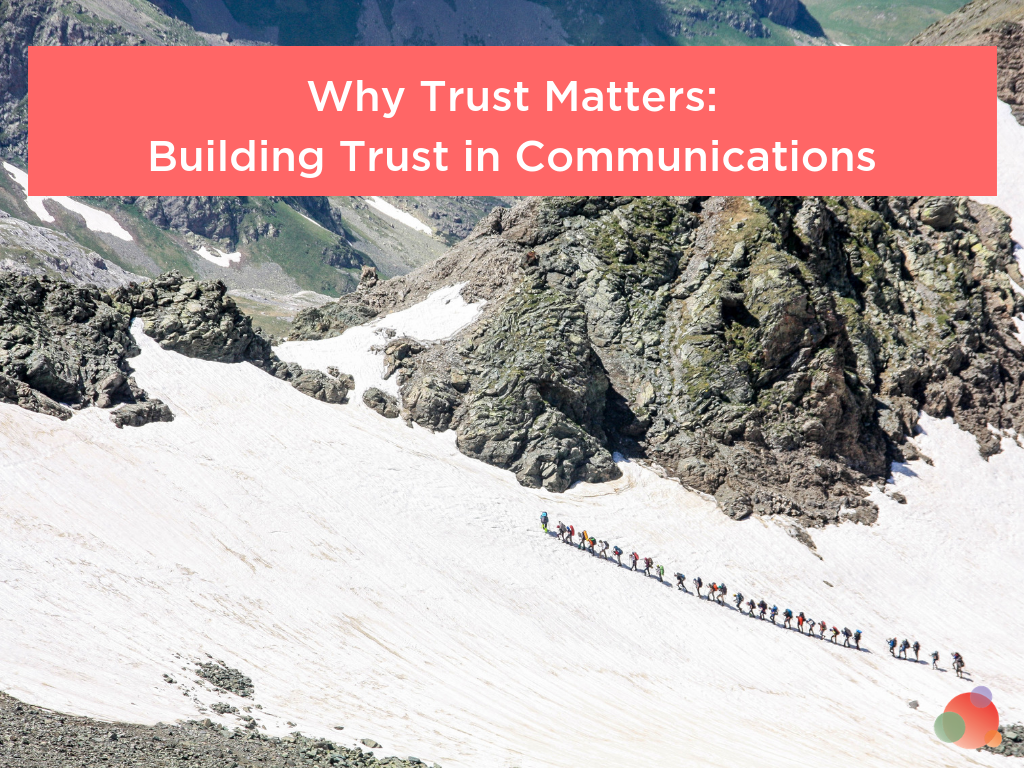 Nothing happens until a sale is made.

It cuts through a lot of the rounding language, corporate speak, and other niceties of modern organizational communication.

Whether you’re saving baby seals or helping a Fortune 50 make its quarterly numbers with a bold announcement, you’re selling something.

But the trope gets it wrong in one big way for communications: the sale is the end, not the beginning, of the process.

In our business? Nothing happens until you establish trust.

There’s always an Insta to update, an infographic to push out, or a half-assed news release that should never have seen the light of day.

And, too often, it’s like watching some sketchy guy work his way through the bar, hitting on one person after another and another until he’s strip-mined the whole room.

Why Trust Matters: What We Know

So if communications—yes, even for megacorps, your edgy tech startup, or that hot new doggie daycare small-biz you just signed—is about trust, it’s useful to review what we know about the subject.

If you’re reading this in the U.S., the story is simple: Trust is down. Way down.

According to the 2018 Edelman Trust Barometer—the most authoritative annual study of trust and why trust matters—no country suffered a greater loss in trust regarding major institutions (government, NGOs, media, business) during 2017 than the U.S.

Here are some other findings:

There’s more—a lot more—and all of it should matter to people in our profession.

And if this picture seems bleak, it really isn’t.

In fact, the erosion of trust is key to communication’s ongoing value.

Think about it. Less trust in media also means we need to rely less on that very same media.

Why Trust Matters: It’s All Relative

In the U.S., trust in businesses and NGOs—two groups which, for most of us, cover the majority of clients and employers—is now significantly higher than trust in the media or government, meaning PR in those sectors has a strong base to build from.

And, unlike the often-binary world of old PR—you either got that NYT feature or you didn’t—trust is incremental and relative.

Your clients and employers don’t have to be absolutely trusted. They need only be trusted more than their competitors.

Step away from the features-and-benefits focus of marketing and even the sound-like-journalism pseudo-reporting of most traditional communications.

Specifically, what does it look like if you’re trying to build trust?

The heavy lift is: establish it in a way likely to resonate with the audience’s social ecosystem and, ultimately, move them to a decision—even if that decision is just trusting you enough to listen some more.

Well, it’s simpler than it sounds.

You have to know your audiences’ values, frame your messages inside them, and you’ll both build trust and control the dialogue around whatever you’re promoting.

Do that one thing, and you have to screw up or be massively outspent to be ineffective.

Opinions, Attitudes, and Values: A Framework

I mention values—a word that’s been devalued (no pun intended) to the point of ridicule.

Today, we have family values, community values, corporate values, and values too low to advertise.

But when anchoring your messages in order to build trust, values are a specific thing for the foundation of a three-level pyramid guiding people in decision-making.

On top are opinions, the myriad thoughts and considerations people have about any subject.

The next level of thought is attitudes.

Forming the bedrock of opinions and attitudes are values.

We could debate opinions about my writing and probably even attitudes about it.

But, you’ll have a tougher time finding people from the anti-knowledge and anti-growth lobbies.

That’s a characteristic of values.

Because they are so basic, they tend to have wide acceptance. And that’s what makes them powerful when you’re trying to build trust.

If the audience you’re messaging believes you share at least some of its values, that gets you in the door with strangers the first time you’re communicating.

And, if a crisis strikes, it is the primary wellspring from which you can draw out the trust necessary to fix things.

So if values-based communications strategies work so well, why don’t we use them more?

One reason is otherwise well-intentioned people can’t help but muck with a stated value.

They try to add things to it, refine it to make it appeal to a particular group or otherwise wordsmith it to death.

I’ve seen simple, one- or two-word values clearly identified through research turn into paragraph-long statements by stakeholder committees or other privileged participants.

A good rule of thumb is if your value needs a sentence (or a paragraph!) to explain, then it isn’t broad enough.

Hitch Your Wagon to Audience Values

If done correctly, focus groups or audience interviews can get you most of the way there.

And the good news is: when you hitch your wagon to people’s bedrock values, you’ll know right away whether you’re on track or not. The audience will let you know.

A simple exercise: choose one of your communication plans and map values and attitudes to each of your major messaging points.

Why Trust Matters: Who Owns It?

Today, everyone can beg, borrow, buy or steal a megaphone.

But if we’re doing our jobs right?

Communications professionals own the creation, maintenance, and growth of trust.

For all but the most transactional and commodified clients, that’s where the challenge starts.

That’s where our value creation starts, and where we can thrive amid a world of tightening budgets.

Photo by Anton Murygin on Unsplash