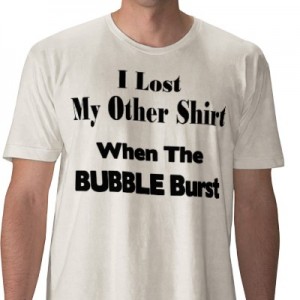 Is anyone else concerned we’re very close to another tech bubble burst? It’s normal that history repeats itself, but it usually happens with generations who don’t remember the first time around.

In Chicago, we don’t have to look far to begin this conversation. A little more than a year ago Groupon was offered $6 billion from Google (an offer they turned down in order to go public, which they did less than a year later). At the time, I predicted they would falter and never see that kind of money again.

I didn’t make this prediction because I have some crystal ball that tells me what’s going to happen and gives me winning lottery numbers. I made it because I was reminded of what happened during the dot com bubble.

We just watched Facebook buy Instagram for $1 billion (a year’s worth of profits) and insane valuation numbers being thrown ($96 billion) around as Facebook prepares for their road show.

This is a lot of money for companies that don’t make money (excluding Facebook, who has figured out the profit game). I’m reminded of 1999, when venture capitalists were paying big money for great ideas and lots of eyeballs, but companies without business plans or a way to make money.

During an event I attended last week, Carol Roth reminded the audience a company is worth what just one person will pay for it. Hence, Instagram was worth $1 billion to Facebook because they clearly have something the giant social network does not.

And Chris Dixon says no good VC firms invest in companies with the idea they’re going to flip them. He says this is a bad strategy and they’re much better off investing in companies that have a good chance to build a very profitable business.

But is this enough? Did we learn our lesson from just 12 short years ago? Or are we quickly careening toward another mistake that could have been prevented by studying history, setting aside our egos, and forgetting about greed?