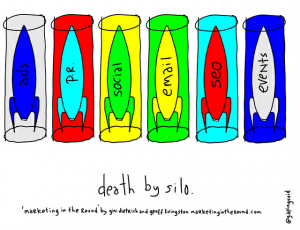 A few weeks ago, a friend told me a great story.

She said there was a new business prospect for the accounting firm where she worked. One of the partners took this prospect to lunch on Tuesday. The very next day, the prospect went to lunch with a second partner. And, on Friday, while the prospect was at lunch with the third partner, he said, “I have to say, getting three lunches out of your firm this week has been great!”

Not one of the partners knew the other was talking to this guy. And, of course, he felt no need to fess up until he was at his third lunch of the week.

Putting aside the fact that someone has time to have three lunches out in one week, the lack of communication among these three partners about something so simple is astonishing.

A few days later I saw the following comment on a blog post about the view of social business from the c-suite.

It’s sad, really, that organizations can exist today without the people inside talking to one another. That they don’t work together towards a common goal.

But silos exist in every organization – small and big, profit and non-profit, Main Street and Wall Street.

How We Got Here

One of the things Geoff Livingston and I talk about in Marketing in the Round is how we got to this point.

Early in my career, I was lured away from Fleishman-Hillard in Kansas City to help build the PR department inside an advertising agency.

This was all the rage.

Dell and WPP Group formed one marketing agency that worked on only Dell products. They consolidated 800 (!!!) agencies in order to begin to regain market share from Hewlett-Packard and to stop the turf wars over budgets, campaigns, and results.

Advertising agencies were building PR profit centers inside. PR firms were buying web and direct agencies. Everyone was singing kumbaya and getting along famously.

The dot com bubble burst, which really only affected the Silicon Valley and the firms that focused solely on technology, but the rest of us were watching.

Then the 9/11 tragedy enveloped our country, which led to an instant stock market crash and people scrambling to figure out what was coming next.

And, of course, we all know what has been going on the past three years. The Great Recession really pushed people past the point of wanting to work together. Everyone scurried back to their respective corners and went back to protecting their budgets, campaigns, and results, if only just to survive.

And suddenly we were back to siloed organizations that had three partners taking one prospect to lunch three days in one week.

It’s pretty common to think only large organizations have silos, but start-ups and small businesses are sometimes the worst offenders.

A lonely silo exists inside these organizations because the focus is on getting things done and out the door, rather than doing things the right way (internally).

These companies are solely focused on making the customer happy in order to gain more customers. The leaders in these places are really good at their craft, but not necessarily at running a business. So they forget (or don’t know) there needs to be processes that bring together everyone to work toward one common goal.

The functional silo feels very team-like. There are brainstorm sessions and, if you’re working late, pizza is delivered and paid for by the company.

But this team doesn’t have a seat at the business strategy table. This is really indicative of what happens in a large PR firm. You have a team that works together every minute of every day on one common goal, but it’s typically around an industry or one client. It’s never for the betterment of the entire agency.

Things don’t move quickly in the functional silo because 10 different “teams” have to sign off on everything, slowing the process and creating an absurd amount of red tape.

Breaking Down the Silos

It’s now time to stop this practice, break down the silos, and work together.

It isn’t going to be easy. It’s a big culture change. And people hate change. But it can be done.

It needs to be done.

The organization of tomorrow won’t be able to sustain itself if it has any sort of silo inside. It won’t be able to react quickly to real-time customer needs, nor will it be able to integrate new technologies that are coming at as faster than any other generation has seen.

You don’t want to be that accounting firm that has three lunches with one prospect because they don’t talk to one another.

Call it social business or call it growing a business the right way. Whatever you call it, it’s time to do it.