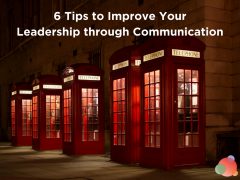 Study after study has been done that shows the very best leaders are great communicators.

And, as a communications professional, I run into people all the time who think everyone communicates so there must be nothing to do it.

Being a great communicator takes incredible skill and years of practice.

I remember reading an article a few years ago in which Jason Fried (the co-founder of 37Signals here in Chicago) talked about how he was taking lessons in Ruby on Rails so he can better communicate with the programmers who work for him.

Because his expertise is in design, he doesn’t speak the same language as the people programming the company’s new applications.

He decided it would be smart to learn enough about what they do in order to communicate with them.

I love this. This kind of earnest curiosity is part of what makes him successful.

And it’s a lesson we can all take to heart.

If you don’t know what kind of work your team is doing, how do you expect to be able to communicate with them?

I’m not saying you have to become an expert in everything your colleagues do.

But there are six things you can work on to hone your skills: three are foundational and three surround people.

As leaders, we sometimes think we’re being extremely clear in our communication.

After all, we’re the leaders so everyone must follow what we say.

But what we soon discover is not everyone in our organization has access to the same information we do—or the same context.

That means we end up communicating at a level they can’t understand.

Following are three ways to increase your foundational communication skills.

The nice thing about public speaking is it helps you learn how to explain things in a way that make sense to every audience member, no matter how much (or little) information they have about your topic.

The ancillary benefit is it also drives an incredible amount of referral leads to your business.

In fact, speaking is our number one driver of new revenue.

Why not hone your skills and do business development?

As a communications professional, I’ve spent most of my career helping executives learn how to create clear and concise messaging that not only tells the story, but helps employees understand why you’re doing something.

Bill Clinton is the master at this.

Anytime you need some tips on how to better deliver your message, watch him do it.

He’s smart enough to know exactly what he’s going to say—and well rehearsed enough to do it, as well.

But watch him listen carefully to the question being asked, and then ponder it.

That’s half charisma and half excellent leadership skills.

Most people would cut off the person asking the question, making an assumption they know what is being asked.

And most people also don’t truly listen to what’s being asked, sticking with their message points.

But the best leaders will actively listen, ponder, and then find a way to communicate their message while staying relevant.

If I were speaking about this topic, instead of writing it, I would ask you—by the show of hands—how many get up away from their desks and walk the halls or the plants or the stores to talk to their employees.

A simple spreadsheet will do, but it will force you to get out there and communicate more efficiently.

These are a little more difficult to define because they are softer skills, but if you work on the following three things, I think you’ll see a big difference in employee morale and company growth a year from today.

When the economy hit us really hard in 2009, I had to quickly make a decision about whether to be honest with my team or (what I thought) protect them from what was going on.

I chose the former, which allowed us to have crucial conversations about the health of the organization and what that meant for their careers.

Today I run the business by sharing revenue goals and where we stand from week-to-week.

When I tell other business leaders I do that, they cringe.

But I’ve found that level of honesty and transparency allows us to focus on the right things instead of my team trying to figure out why I’m making the decisions I do.

This one should seem so intuitive, but it’s not.

Shake people’s hands, look them in the eye, listen to what they have to say.

It is helpful not only from a communications perspective to listen, but it opens your eyes to how the decisions that are being made affect all of your employees.

Go back and refer to what I said about Bill Clinton above.

Most people listen to respond.

Listen to listen—really listen, and you’ll be well on your way to building rapport.

This one is hard.

No one wants to tell the boss they’re bad at something.

But if you allow honesty and transparency and you build rapport, slowly they’ll begin to tell you the truth.

Sometimes it will hurt and other times it will feel nice, but the important thing is you create a safe environment where people can give honest feedback that you’ll use to better hone your skills.

Some of the worst leaders in the world don’t allow for feedback—and that’s why events such as the BP oil spill happen.

People were afraid to say they saw flaws in the safety mechanisms and it slowly became a gigantic crisis.

Don’t let that happen among your team.

What can you take away from this to improve your own communication skills, whether you lead an organization, a team, or yourself?

Photo by Marko Pekić on Unsplash