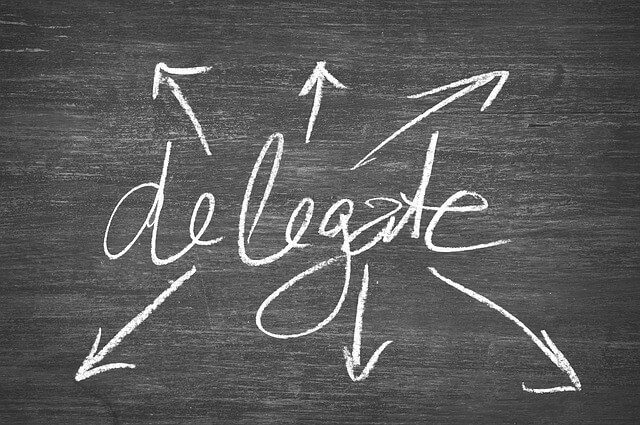 Would all the control freaks in the room raise their hands?

<shoots both hands up in the air>

Those with your hands up…this post is for you. And for the rest of you, read along so you can support your control freak leaders.

It’s possibly one of the most crucial parts of leadership. But it’s so gosh darn difficult to do.

Even when you have a trusted team around you. It’s hard to back off from relying on the one person who has brought you success so far in your career (YOURSELF) and let go.

You make excuses about why you can’t.

“I don’t have time to train others.”

“I end up having to do it anyway.”

“I know what I want and can’t explain it well.”

But in the end, those excuses just prevent you from becoming the leader you need to be. One who focuses on growing your career and organization by delegating the tasks you shouldn’t be doing.

What follows is a guide with some of the lessons I’ve learned about delegation. As well as task delegation tactics I’ve found work well for me.

Acceptance is the First Step

Many of us rely on one person the majority of our professional careers: Ourselves.

We take all the responsibility. Pick up tasks others overlook or don’t follow through on. “Save” team members who don’t do things properly by doing them ourselves. Take on tasks outside of our role because we know they’ll get done that way.

These traits are part of what make us successful in the first place and maybe even helped us get to our current position.

While sometimes we get frustrated other people don’t carry an equal load, for most of our careers we just assume it’s just our role to take care of everything. And secretly we prefer to. Because we know we can trust ourselves vs. take the chance on something not being done well.

Do you say any of the following?

If so, please repeat after me:

My name is XX, and I’m a control freak. I struggle to delegate tasks to our team, even though they are capable, and as a result limit the growth of my organization, our team, and my own professional opportunities.

Because while these traits help you succeed early in your career, once you get to a certain point they become your downfall.

Why Task Delegation is Important

One person can’t do everything.

I know, I know…this came as a surprise to me as well.

An organization cannot grow or scale if a handful of individuals do all the work and everyone else just sits around and waits for the “hand me down” work.

It also prevents you from insanity and a constant chase after yourself.

Before I learned to delegate, I found myself frustrated—a lot.

I felt I barely kept my head above water and as a result never did as good of a job as I could or should at any of the tasks on my plate.

Additionally, while caught up in the day-to -day tasks, I lost my vision on the bigger picture strategy.

This meant I missed opportunities and red flags.

So here is how I delegate:

As suggested by my amazing leadership coach Randy Hall, I make three lists:

I take everything on list three and look at how it can be delegated (or eliminated).

Right away I delegate the tasks I can that are easy to pass over.

I then create a timeline for tasks I can’t delegate immediately, but can transition through training.

WARNING: Humble city here.  You find a lot of the things you thought “only you could do,” other people can do just fine.

The new, more humble me (hahahahah…right…) goes back to list one and moves a few more tasks to list three, then I follow the same protocol above again.

Next, I take list two and write them out and put them in a visible place.

Every time I desperately want to just do something on list three, I’d find/replace with list two.

I go through a version of this same protocol quarterly.

In theory, this all seems pretty straight forward. Unfortunately, the theory doesn’t account for human emotions.

It’s important to remember delegation, or lack thereof is a habit.

We all have triggers that make us revert back to old, negative habits.

To avoid this as much as possible (it’s a process), you must identify those triggers.

For example, my big control trigger is stress.

When stressed or loaded down with deadlines, I want to control everything.

I’m like a little human PacMan who runs around and gobbles up all the tasks.

Because when stress makes me feel out of control, I fight back by trying to take all the control.

This is the least productive thing you can do when you are stressed and under tight deadlines.

Yet that doesn’t stop me.

Figure out your triggers so you can be self-aware when they pop-up and cut those control demons off at the gate.

Task Delegation is a Process

It sounds so easy to delegate, but it’s not.

Be patient—with yourself and those around you.

Don’t give up on people if they don’t do things perfectly right away. Often people don’t step up to the plate because you don’t give them the opportunity to do so.

Task delegation won’t work if you underestimate people and don’t give them the tools they need to succeed. Make sure you don’t set everyone up for failure simply because you refuse to let go of control of tasks better left in someone else’s hands.

What else would you add to the task delegation process?