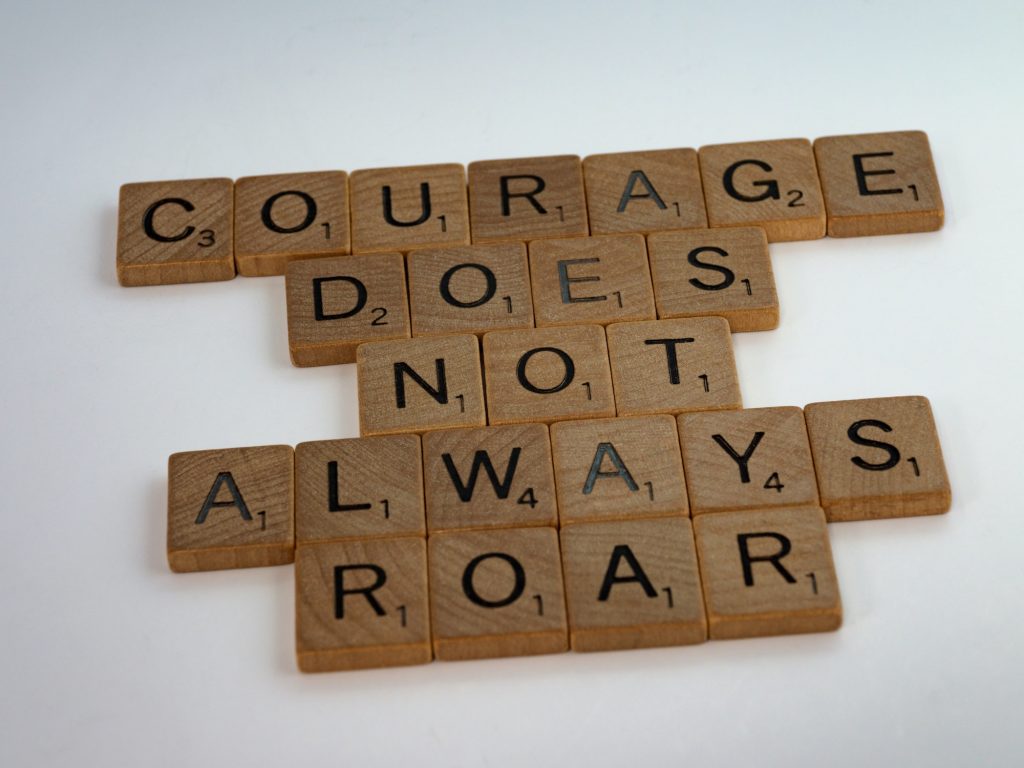 I’ve been thinking, speaking, and writing a lot about the skills that leaders must employ to lead their teams, and themselves, through these ongoing uncertain times.

(Sorry, I won’t call them challenging. More about that in another post, perhaps.)

Even though there seems to be a light at the end of the tunnel.

(Can I get an “Amen!”?) these times will likely continue for another six months or so. (That’s half a year, for those of you who don’t like maths!)

While we need to employ all critical leadership skills (and I refuse to call them “soft”  skills, because they’re anything but) we all know, including creating a vision, articulating the values, building trust, inspiring communicating respect, and others, one rises to the top: being courageous!

If your team needs one thing from you now more than ever, it’s courage. But what exactly is courage after all?

According to Forbes, courage is “the quality of mind or spirit that enables a person to face difficulty, danger, pain, etc., without fear.”

Thrive Global says the definition is “the mental or moral strength to venture, persevere, and withstand danger, fear or difficulty.”

My view is much more in alignment with Thrive Global than with Forbes.

A handful of leaders I admire did just that. These include the Reverend Martin Luther King Jr., Abraham Lincoln, Nelson Mandela, Mahatma Gandhi, and Harriet Tubman, to name a few.

They tapped into their own courage, and in doing so, helped their followers find and tap into theirs.

And in doing that, they helped enlist others to fight for what’s right, to beat the odds, to create enormous social change.

Even though you’re not leading people into independence, fighting for civil rights or the right to be educated, to escape slavery, or win a war, it takes bravery to lead during these times. It takes courage to run a corporate department in those spaces, to be a partner in a two-partner firm, or to be out on your own.

If ever there was a time to tap into your MLK, Mandela, Lincoln, Gandhi, or Tubman, that time is now. Others for you to consider emulating include Captain Sully, Malala, or Winston Churchill during the Battle of Britain.

And if you’re not a history geek like me, don’t worry. We’ve all had people in our lives who have demonstrated bravery during times that could be frightening.  It might be a family member or friend, a character in a favorite novel (Sydney Carlton, anyone?). It might be a leader or peer with whom you worked.

Someone all y’all know well inspires me.

Around 2009 she told her firm’s clients something to the effect of “Marketing and communications have changed forever. It’s no longer about just media relations. It’s about marketing in the round, about using all these new channels to be truly effective. If you want to join us on this journey, we’ll kill it, together. And if you’re not ready to take the plunge, that’s fine: we’ll help you find another agency who will help you do only traditional media relations.”

That meant potentially losing some of her business—and some of her colleagues. Talk about courage.

I think this helps prove you don’t have to be the leader of a nation, a corporation, or a political movement to lead, and that courage will serve you wherever you lead.

When you think about them, consider the power of their courage, and how it influenced others to move forward, and achieve the outcomes that benefited the organization, whether that organization is an agency, a company, or even a family.

In Addition to Courage, Optimism

I’ve blogged previously about how everything is contagious. That includes energy,  and of course courage (or fear) and optimism (or pessimism).

The optimism that your agency, department, or soloist firm will get through this, whatever “this” means, and that things will once again be “normal,” whatever normal means.

I don’t think he ever questioned his ability to do so. He was eternally optimistic that his leadership, and his team, would absolutely triumph, over not one cataclysmic event, but two.

Think back to that jaunty smile and create your own. Optimism, tied to courage, tied to an unstoppable belief in yourself, will serve you especially well over the next six months.

Now everyone sing, “The Sun Will Come Out Tomorrow…”

A number of sources such as wework talk about three types of courage:

Why Courage? Why Now?

As mentioned previously, courage has always been a critical, foundational leadership skill, along with building trust, treating people with respect, listening actively (or, as I’ve been known to say in my best Yonkers, New York accent, “Shaddup and listen, would ya?”).

But I believe it’s more important than ever to lead with courage.

Your people are likely exhausted.

Some were energized by the events of March, April, and May of 2020. Some were flattened by them.

But eventually, many of them were in a better place by the summer. The pandemic numbers came down in many states, people could get outdoors again to walk, hike, exercise, or just move. Maybe some of them thought we had seen the worst of things.

Then August came, and if you have employees with school-age children, or if you do yourself, they had to deal with the big Back-to-school debate of 2020.

Then the Fall of 2020 came, with people returning indoors, and due to a confluence of reasons, COVID-19 numbers spiked. And people realized we really were in it for a long haul.

And those Zoom work calls grew oh so tired.

So they’re exhausted. And you may be, as well.

We Need Courageous Leadership Now More Than Ever

No one said this job of leadership would be easy. And your people need your courageous leadership more than ever.

They need you to tell them (and more important to believe) that you can lead them through whatever will come your way between now and when life gets back to normal, whatever and whenever that normal will be.

They need you to have the courage to make decisions, knowing that delaying a decision is a decision: a decision to accept the status quo, even if that doesn’t serve you, and a decision to not be a leader.

They need you to have the courage to listen to feedback about your leadership performance. People will have the guts to tell you what they need from you as a leader, if you have the guts to ask for it, and to really listen with an open mind.

They need you to have the courage to ask the leaders under you, the leaders in training, the team, and yourself, “How can we do better?” “Where are we not hitting our own standards of excellence?”

They need you to have the courage to pivot your business as needed, to be of greater value to your clients and your prospects.

They need you to have the courage to improve your own leadership before you manage. (Managing is where many “go” first, but if they lead first, they’ll find managing that much easier.)

Most of all, they need you to have the courage to continue developing as a leader, for the rest of your career.

Continue to Develop Yourself As a Leader

If you’re in any way struggling with leading your team or yourself during these uncertain times, if you’re having trouble finding your leadership courage, please reach out to me to arrange a complimentary coaching session around this.

It’s my honor to offer this to all members of our Spin Sucks Community.

View all posts by Ken Jacobs