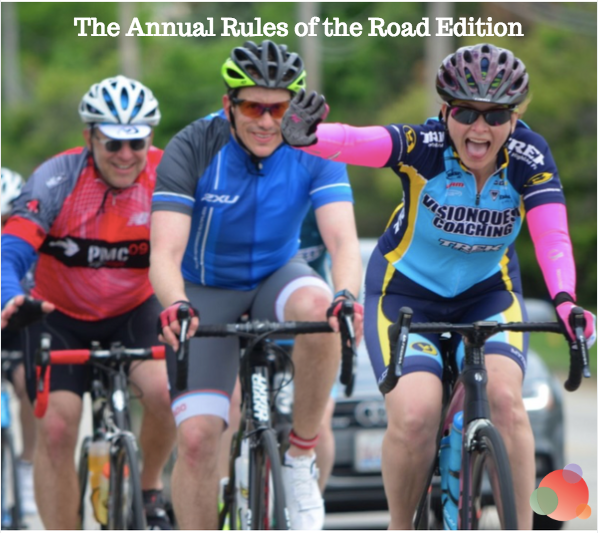 It’s a holiday week for most of North America, and we decided to have a little fun with our content.

You won’t learn a whole ton that will help you in your professional career, but you will have lots of books to read, podcasts to listen to, and even a BINGO game to play.

I thought I’d kick off this holiday week with a reminder about cyclists on the road.

Because, while it has nothing to do with communications, most of you will encounter cyclists on the road.

You see, I am a cyclist. I ride my bike, on the road (and on the trainer and in the gym) for exercise.

I am in no way doing it to annoy drivers or hog the road or act like cars don’t belong out there.

The only reason I might give you that perception is because I’m fearful of my life because of something either you or another car has done in the previous seconds.

And, I would like to think that once you realize the cyclist is a human being and not someone out there to slow you down, you’ll be a little more cognizant.

Cyclists On the Road

There are many, many, many people who get behind the wheel of a car and become different personas of themselves.

They think cyclists are there as moving targets.

They think we ride just to annoy drivers.

As it turns out, that’s just not true.

Sure, we may slow you down and there are lots of amateurs out there (especially now that so many places have bike sharing).

But no one is doing it to annoy you.

A year and a half ago, I hired a coach to help get me back into racing shape.

While I never stopped riding after my small one arrived, I certainly was not in the same shape I was before her.

It was time and I needed some help.

Because of that, I spend even more time on my bike than before.

We joke that I have one really bad cycling accident a year—and, with the exception of one, they have never been my fault.

(That one, I freaked out going over a bridge because there were gaps in the road…and I ended up freaking myself out so much, I crashed.)

Everything I’ve listed above happened while I was riding either on the bike path or in the bike lane.

If there isn’t a bike lane, I ride as far right as I possibly can…because, contrary to the belief of some drivers out there, I do not want to get hit by a car.

There are rules of the road.

If the bike lane is blocked or impaired, cyclists have a right to be on the road.

If there isn’t a bike lane, cyclists have a right to be on the road.

Cyclists can ride two across.

But we also have to obey traffic rules, which I know isn’t the case for all of us.

It makes me angry when I see a cyclist running a light or moving through traffic against the flow.

He makes it bad for all of us.

But the fact of the matter is, no matter how you feel about it, cyclists have as much right to be on the road as cars.

I once had a friend tell me we didn’t deserve to be out there because we don’t pay taxes.

Just because I prefer to ride my bike doesn’t mean I don’t have to pay for a city sticker and a neighborhood parking permit and parking and taxes.

Rules Of the Road

With that in mind, I’ve put together some tips for watching out for cyclists this holiday week:

I know some of you will say, “But Gini, cyclists don’t follow the rules of the road.”

It kind of makes me nuts to see guys (I’ve never seen a woman cyclist do this) weaving in and out of traffic and going through red lights.

But don’t let the bad ones ruin it for us all.

Just remember…cyclists are human beings. When you rush around them or ride in the bike lane or don’t check your mirrors for them, you are risking their lives.