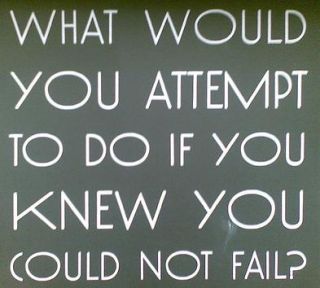 About 10 years ago, I had a business advisor ask me, “You’ve never failed at anything, have you?”

I remember blushing and stammering…of course I have. I’m sure I have. At something.

The truth of the matter is, I hadn’t. Not really.

Sure, I’d made mistakes that could be looked at as failures, but there wasn’t a big, life-changing event to point to.

Even in my advanced creative writing classes in college, my degree advisor would push me to reach into the depth of my soul to write about something that was meaningful and would resonate with people.

But even then, I wasn’t mature enough or confident enough to recognize what he meant…nor was I willing to admit anything bad had ever happened to me.

I saw myself as just an average kid with lots of siblings and good grades that afforded me a scholarship to college.

College was easy—too easy. I aced my classes and even stayed ahead of assignments. I have a very vivid memory of sitting in the stairwell of the English department building reading Toni Morrison’s The Bluest Eye a full semester before we would read it.

Then I went to work for Fleishman-Hillard where they put me on a pedestal. I mean, really. I had no business doing some of the work I did at age 27. None.

So I went out on my own in 2005 with an overly-inflated ego, enough confidence to know I wouldn’t fail, and a drive to do the very best work.

And then I failed.

They weren’t big failures. Not at first. They were bigger mistakes that led to failure.

I borrowed way too much money and hired a bunch of staff we didn’t need…and I didn’t properly on-board or train them.

There were very talented people running around in circles because I had zero idea how to lead them.

And then it all crashed down.

We all know what happened in 2009, but even then, we started to bounce back a bit.

In 2011, the debt ceiling debate happened and everyone put a halt on spending.

We had agreed to 60-90 day payment terms (dumb, dumb, dumb) with our clients so we were stuck holding about $300,000 in accounts receivables, but no cash in the bank.

I was days from calling a bankruptcy attorney and shutting it all down.

Then we launched Spin Sucks Pro and were so busy building content and the site that we forgot about any marketing or promotion.

No. One. Bought. Anything.

So I had a business that went from 37 employees to just me and two other people. I had this grand idea for a membership-based business that didn’t just flop, but went down in a grand flame. And we had to start all over again.

I had some very dark thoughts at that point in my life. Not only had I failed at all of this, but I was going to fail at life, in general.

All of this is why I re-read, “Why Writers Are the Worst Procrastinators” every year.

A couple of weeks ago, I wrote about Ernest Hemingway and some of his advice for writers (including a killer list of books to read) and Jasper Mulder tweeted me: 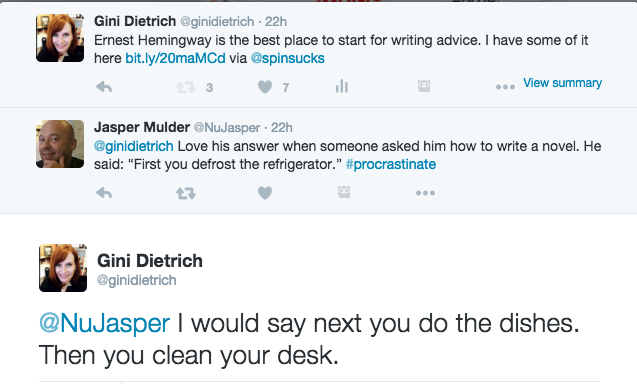 We joke about it, but it’s true.

The Atlantic suggests there is a reason for this:

Most writers were the kids who easily, almost automatically, got As in English class. (There are exceptions, but they often also seem to be exceptions to the general writerly habit of putting off writing as long as possible.) At an early age, when grammar school teachers were struggling to inculcate the lesson that effort was the main key to success in school, these future scribblers gave the obvious lie to this assertion. Where others read haltingly, they were plowing two grades ahead in the reading workbooks. These are the kids who turned in a completed YA novel for their fifth-grade project. It isn’t that they never failed, but at a very early age, they didn’t have to fail much; their natural talents kept them at the head of the class.

Even for me, I remember my high school English teacher (AP, of course) telling my mom that he’d never had a junior choose Ayn Rand for their second semester project.

(Let’s not talk about the choice in author right now.)

Type-A overachiever all the way.

But then we go into the real world and, as writers, we’re now competing with the other people who aced English class and suddenly we’re faced not only with a fear of turning in something bad, but in not being able to get anything out of our brains and onto paper.

For the first time ever.

We’re faced with something we’d never had…failure. And not just failure, but the fear of it.

There is, of course, a cure for this. And not just for writing, but for life, in general.

It could be in your career or running a business. It could be in the extracurricular activities you do with your kids. Or in the way you run your household.

Wherever you struggle—and we all struggle—there is a cure.

My cycling coach pushes me on this one—I’m big on the fixed mindset in cycling because I LOVE to compete. But competing with a man who is 10 years younger than me isn’t the best thing for me or my growth.

Yet, it’s how we’ve learned to cope in our daily lives.

Schools, particularly in the U.S., set us up for fixed mindsets, which means there is only one answer or that you believe talent is something you’re born with and it can’t be evolved or changed.

A person with a growth mindset, on the other hand, welcomes a challenge and enjoys doing things they’re not good at because they know they’ll learn.

Stop Allowing Fear to Paralyze You

Perhaps you’re learning how to read analytics and metrics.

Or you’re trying to figure out how content and search engine optimization work hand-in-hand.

Or you’re moving beyond media relations to do some really hard, but powerful communications work.

Whatever it may be, you have a growth mindset and fear of failure won’t paralyze you.

Talent can be learned. It can evolve and grow.

If you embrace that, you may still procrastinate (sometimes your desk just needs to be cleaned), but when you do produce the work, it’ll be the kind you’ve always been praised for doing.

Stop allowing fear of failure to paralyze you.

Do the hard work.

Be okay with not being the kid in the front row who has all of the answers (no one likes him, anyway).

Change to a growth mindset and the rest will come.