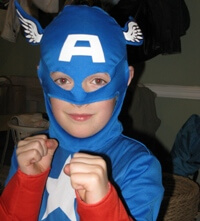 Guest post by The Young Turk. Additional editing and amplification by his mom, Sarah Robinson.

A note from the author’s mother:

My son, The Young Turk, is all about ruling the world. It is one of the many reasons Gini Dietrich thinks he is awesome. So when we were asked to write a guest post for Spin Sucks, I asked the YT for the top five strategies he would share with those who also aspire to world domination.

Here’s what he offered – with some additional thoughts, editing, and amplification from me. 🙂

Strategy #1 – Pay the Army lots of money and get a tank.

Yes, ruling the world by force and by creating fear seems to be a popular choice for political and business leaders alike. Sadly, as awesome as this strategy sounds, it isn’t sustainable. There will always be someone with a bigger gun.

Engaging everyone in a learning activity – especially a physical and spiritual one like karate – builds common experience. And really, doesn’t enrolling the entire world in the same karate dojo, teaching them “Wax on. Wax off,” and then beating the crap out of the bully sound like a pretty awesome way to rule the world?

Strategy #3 Have everyone read “Vordak the Incomprehensible: How to Grow Up and Rule the World.”

Why would any aspiring world dominator want to share his playbook for ruling the world? Two reasons: 1) it empowers everyone to believe that they, too, can be rulers of their world and 2) giving away your top secret stuff means you’ve got to stay on top of your innovation game – which is, in fact, one of the true secrets of world domination.

Imagine this as your World Ruler campaign platform: All global conflicts and disagreements would be solved on the basketball court. No one could defeat you.

In the end, all world dominators know that conflict resolution is a) their most important job and b) how they spend most of their time. And the ways they choose to handle this most critical task makes or breaks their career. The more they create buy-in and actual enthusiasm around the process, the happier everyone will be.

Strategy #5 – Give everyone a Krispy Kreme “hot now” donut.

If you’ve had one of these, you know that you’ll do just about anything to get your hands on a dozen or two. Or three. Nothing on earth should taste like a “hot now,” and he who gives them away can command legions.

If you’ve never experienced a “hot now,” well….resistance is futile. Prepare to be assimilated.

The Young Turk is the 8-year-old son of Sarah Robinson. His unique lens on the world regularly inspires the work that she does at her blog, Escaping Mediocrity.