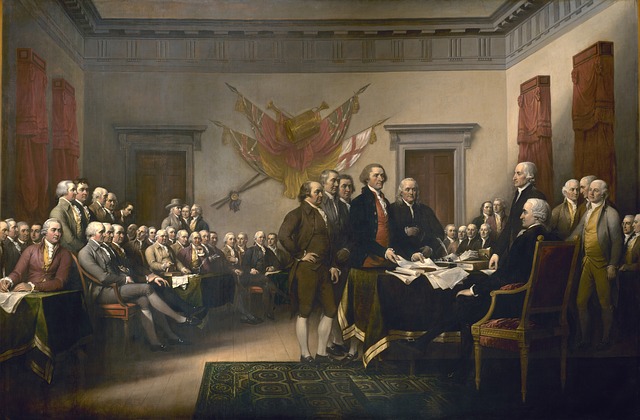 Happy Day After The Fourth of July!

What better way to launch this next quarter than with some Founding Fathers quotes to jumpstart your motivation?

I may be a communications pro by day, but I’m a huge history nerdette by night.

Ask Gini Dietrich, I drive her crazy with my random facts about different historical events.

I’m also that annoying person who will suddenly see some sort of correlation to a historic event in a completely non-related conversation and totally divert down a rabbit hole of historical facts.

One of the first trips I went on with the guy who currently calls me his girlfriend, we went to Boston (a history lover’s playground) and stopped by the docked U.S.S. Constitution on our walk down the Freedom Trail.

Inside was a computerized trivia game about the ship and its battles.

I got every, single one right. Every one.

He looked at me speechless, slightly scared, and asked very simply, “What is wrong with you?”

All of this is to say, there was no way I’d miss an opportunity, on the day after the Fourth of July, to write a post drenched in some sort of delicious U.S. history goodness.

It doesn’t matter if we are just starting out or have many years and successes under our belts, we can’t be good at what we do unless we are constantly learning and working to improve.

Communications is an industry that is constantly evolving and where we must pull many different segments of organizations together to create programs which show real business value.

This requires creativity, out-of-the-box thinking, diplomacy, strategy, interpersonal dynamics, ability to use the written, and spoken word precisely and in a targeted manner…..

All things that Founding Father’s also had to be well skilled in.

So if they were around today, what advice would they have for us?

All we can do is look to some of their most famous quotes and see how it applies to what we do.

While there are many Founding Fathers quotes to pull from, I focused on our first three presidents and the unforgettable Ben Franklin for today.

George Washington is known for his extremely specific and strategic communication style. It is those skills that not only helped him win the Revolutionary War, but pull together a country of rebels afterward.

(If you are interested in learning more about George Washington’s communications style, I highly recommend “Valient Ambition.”)

“Happiness depends on the internal frame of a person’s own mind, than on the externals in the world.”

Good advice for life and work.

“To be prepared for war is one of the most effective ways of preserving peace.”

“Example, whether it be good or bad, has a powerful influence.”

We set an example for those around us whether we try to our not. Be intentional about the example you set for your team and your clients. It matters, and you control it.

John Adams: The Voice of Independence

While Thomas Jefferson wrote the Declaration of Independence, John Adams is the reason it became adopted by the Continental Congress.

He was one of the greatest orators of the Founding Fathers and worked incredibly diligently to refine and improve the craft of communications throughout his life.

Adams is also known to be a visionary thinker and able to look beyond the now to understand the best direction for the future.

While many Founding Fathers quotes are visionary, Adams’ have a quality that’s more strategic and actionable.

If you haven’t read David McCullough’s book on John Adams you need to. I also loved  “The Letters of John and Abigail Adams.”

“Always stand on principle, even if you stand alone.”

Adams was very aware of the importance of reputation in moving forward your goals.

He made sure everything he did was consistent with his morals, principles, and goals.

For example, he was the only Founding Father not to own slaves.

While many (including Jefferson) spoke about freedom for all people and against slavery as a practice, Adams was the only one whose actions reflected his message on this issue.

“Every problem is an opportunity in disguise.”

This quote alone basically sums up the role of an entrepreneur and what we do as communications pros.

“The only thing most people do better than anyone else is read their own handwriting.”

I love this quote so much for so many reasons, but I’ll leave you to your own interpretation.

Thomas Jefferson was in many ways the opposite of John Adams.

Which is why they worked well together in so many ways and had a wonderful (although challenging) friendship throughout their lives.

Jefferson wasn’t a great speaker, and really preferred not to speak.

But he was incredibly gifted when it came to written word and focused feverishly on that craft.

Which goes to show, you don’t have to be good at everything in communications, you just need to hone your craft and understand how it fits the big picture.

David McCoullough’s “1176” is a great look at Jefferson. I’ve also read his autobiography, which is good to get a listing of his life, but poor to understand him as a person. It’s cold and distant.

“Never spend your money before you have earned it.”

If this isn’t rule number one of business success, I don’t know what is?

“Delay is preferable to error.”

In communications, there is often the drive to rush vs. plan.

This normally isn’t the right choice.

Of course, there is value in being agile, building as you go, and adapting as you learn, but that’s different than jumping in, just to be first, without understanding what “first” actually looks like.

“Do you want to know who you are? Don’t ask. Act! Action will delineate and define you.”

That said, you can’t just live a life planning. Set your goals. Set a plan to achieve them. Move forward.

You’ll notice a focus on mental attitude throughout many Founding Fathers quotes.

I was just going to stick with our first three presidents, but I love Ben Franklin and he just has so many great things to say.

So here is your Ben Franklin bonus round. Enjoy!

“The man who does things makes mistakes, but he doesn’t make the biggest mistake of all-doing nothing.”

“Make yourself a sheep and the wolves will eat you.”

“Success is the residue of planning.”

“We constantly change the world, even by our inaction. Therefore, let us change it responsibility.”

“Change is the only constant in life, one’s ability to adapt to that change determines success in life.”

Which Founding Fathers quotes are your favorites?