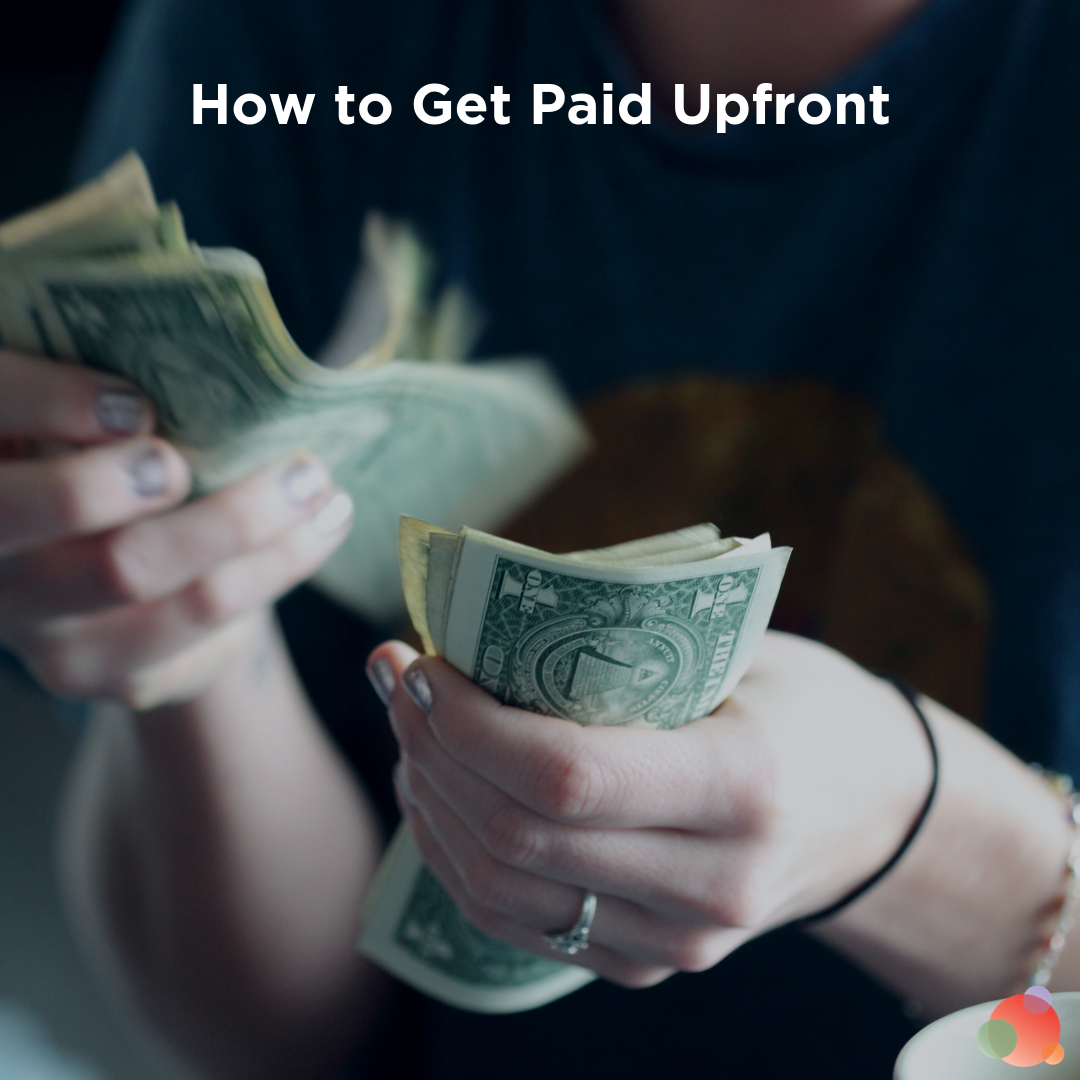 In the agency owner channel in the Spin Sucks community, we had a conversation about this enlightening article Drew McClellan wrote about covering your butt for the unexpected.

The question was raised: do you require a deposit upfront?

The answer was a resounding…uh, no?

The first time a business coach suggested we get paid upfront, I said it would never work.

I hemmed and hawed and gave myself every reason it wouldn’t work.

There are not many times when I am wrong (hahahahahaha! hahahaha! LOL!), but I was definitely wrong when it came to this topic.

He recommended we try it with our next new client so, with trepidation, I threw it out there.

And guess what? It worked. It really worked!

The thing is, if you’re clear about how you work and what your expectations are, the client will hold up their end of the deal.

It even works with those organizations that have 60, 90, or 120 day payment terms.

Stick with me here. I’ll show you how it’s done.

The first thing you want to do is make sure you are clear about your process.

If you require you get paid upfront, clients have to know what they’re getting for that.

We love to do a strategy session with every new client, which allows us to get paid upfront.

This does a few things:

But the biggest benefit? We will not get on a plane, train, or automobile without being paid. That’s just how it works.

And every, single client obliges.

There has been only one instance where I have refunded the money.

That’s a story for another time, but the gist of it is that the CEO was so abusive to me and to his team that I lasted two hours before I whipped out my checkbook and wrote him a check on the spot (minus a PITA “handling” fee).

How to Get Paid Upfront

Once you know what your process is and how you must be paid (the non-negotiables), follow Drew’s advice to be paid at least half upfront.

Be sure you are getting 50% of the project fee up front.  Build payment milestones by date, not by deliverable (otherwise, they can stall on approvals etc. to delay payment).

Build payment milestones by date, not by deliverable.

The moment the client signs the contract, and before you book the session, you send an invoice for $10,000 to be paid immediately. Only after it’s paid will you put the session on the calendar and book your flights (if you have to travel).

Then, during your session with the client, you’ll decide on priorities and who will do what—between your team and theirs.

At that time, you’ll also discuss budget and agree to a monthly retainer.

After you deliver the strategic communications plan, you’ll send an invoice for the first month’s retainer and you will not start work until you are paid.

Likewise, if they ever get behind, you’ll have triggers in your contract that allow you to stop work until they’re caught up.

Another Way to Get Paid On Time

That’s a slightly different scenario than what Drew is talking about, though, because it’s reliant on a retainer and being able to count on cash flow each month.

If you agree during the strategy session that the next best step is to tackle the first priority as a project, you’ll price that bad boy out and you’ll send an invoice for half the fee.

EVEN IF the project isn’t complete yet.

It doesn’t get you fully paid by the end of August, which is when the project is slated to end, but it’s pretty close.

If you were adamant about being paid within the 90 days (and I think you should be), you could send the invoices on the 15th or 20th of each month.

And it’s not how to get paid upfront in totality, but it works for projects that last longer than two days (like the strategy session).

But what if the organization has payment terms that don’t allow you to be paid upfront?

There are a couple of ways to dice that one out:

It takes some creativity and transparency, but it allows you to work even with the organizations that have long payment terms without playing bank or risking losing your skin before you’re paid.

There is one more thing I’d add to all of this: an aggressive termination clause.

It’s less important if you do a strategy session or other type of project without a retainer, but once you start a long-term relationship, build in an aggressive termination clause.

Yes, if a client leaves—or if we want to fire them—we have a 90 day termination clause.

In some cases, if the client’s counsel is savvy, they’ll negotiate that down to 60 days (and it’s a negotiation so ask for something in return).

But it’s never less than that and it always protects you.

In the cases where a client leaves because leadership has changed or budgets have been sliced, it gives you time to both transition appropriately and replace the revenue.

The moral of the story is always, always protect yourself.

Don’t shy away from it just because you think they’ll say no. If they do, you have to do some negotiation (or decide to walk away).

But when you’re really clear about how you work, what they get, and how you expect to be paid, 99.99999% will oblige.

Plus, at this stage in the game, they really want to work with you so they’re willing to move heaven and earth to make it happen.

Get paid upfront and have aggressive payment terms—and then deliver your very best work—and you’ll be rockin’ and rollin’.

Photo by Sharon McCutcheon on Unsplash