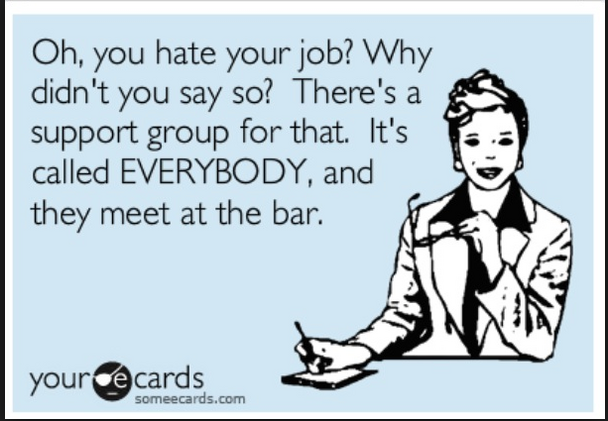 It’s from a Gallup study completed in 2017, their latest report on the state of the American workplace.

That means, out of 10 people you work with, only three are engaged at work.

Of 10 friends and family members, seven of them are miserable.

Are you one of those seven?

It pains me to think only three people on my team are engaged and happy at work.

Surely Spin Sucks is the exception the rule?

24 Reasons You Hate Your Job

According to Forbes and to Business Insider, there are several reasons so many of you hate your job:

That’s because of the Peter Principle, which means a person keeps on getting promoted until they reach their level of incompetence.

At that point they stop being promoted.

But if your boss has been promoted until they’re incompetent, imagine how miserable that is for you.

Not only can they not do their own job, they can’t help nurture, coach, and train you because it’s outside of their ability.

If You’re Miserable, Do Something About it

Going on three years ago, I had the opportunity to attend a two-day retreat with 15 entrepreneurs.

I was their “sherpa,” which meant I was there to offer advice, guide decisions, brainstorm, and commiserate.

During that event, I met Kevin Kermes, who runs Career Attraction.

He talked about this 70 percent of Americans hate their job stat and it confounded me.

If so many people are so miserable, why would they not do something about it?

Since then, I’ve gotten to know Kevin really well.

After that event, we agreed to be one another’s accountability partners and talk every Monday.

I’m still confounded by this stat, but I’ve learned more about it, just by hanging out with Kevin.

And he is on a path to change it.

(I think he secretly likes the stat because it means he can help more people find jobs they love.)

In talking with him earlier this week, it occurred to me that so many of you, our dear readers, also hate your job.

Even if you aren’t willing to admit it, the statistic proves 70 percent of you do.

Add in the fact that the jobs board in the Spin Sucks community is crazy active, and that confirms how miserable people are.

That makes me sad.

No Longer Hate Your Job

That’s why Kevin and his business partner, Olivia Gamber, work with six-figure executives to find their next role.

Their entire business model is wrapped around changing that statistic.

Perhaps you still need to admit you hate your job.

Or you’ve admitted it, but feel stuck.

If you’re in the 30 percent who love their job, congratulations!

You are among the few.

For the rest of you, I wish I were Mary Poppins and could snap my fingers and find a new job for you.

(There are many times I wish I were Mary Poppins and could snap my fingers to great effect.)

Heck, I wish Spin Sucks were a nine-figure business and I could hire you all.

(Because it’s awesome and no one here hates their job.)

But in a world where magical fingers don’t exist and Spin Sucks is not (yet) a nine-figure business, you’ll have to settle with doing the work to find a job you love.

Figure out where your passions lie and what’s most important to you.

Join the jobs board in the Spin Sucks community.

And take control of your destiny.

You’re the only one who can do it.