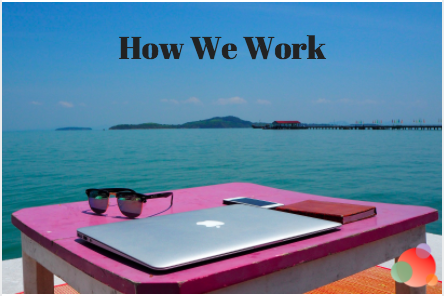 Last week, we started a series on how we work because every time I tell a business owner we are virtual they always ask:

We are going to tell you!

All of our secrets, our hacks, our hidden gems, and our workflows and processes will soon be yours.

There was a Vistage meeting I was at, back in the day, where one of my fellow members had said:

Are you sure this leading people thing is for you? Maybe you don’t need employees.

I remember being angry at the time. How dare he?

During my days at FleishmanHillard, I was always voted the easiest to work with.

(I also got a bad review, every year, for being too complimentary of people and their work. You win some. You lose some.)

OF COURSE I was cut out for leading people.

What my colleague meant, of course, was that I didn’t have a high tolerance for baloney and I needed to find a way around that.

But going virtual—and the end of my having to put up with baloney—came about accidentally.

In 2011, at the end of the Great Recession, we were struggling.

While we had clients and they were paying their bills—and we had a nice-sized accounts receivables out—everyone put the brakes on paying within 30 days when the debt ceiling debates began.

As a small business, not being paid for 90 or 120 days is almost disastrous.

The one thing we could easily get rid of was our office rent.

Why We Went Virtual

Our bulldog of a chief financial officer put me in front of the landlord and insisted they let us out of our lease.

I didn’t even know you could do that!

When I told my team we were going to test working from home for a year, they rejoiced.

It was going to be a test for all of us.

I remember their faces when, about 10 months later, I asked if they were ready to go look at office space again.

That was my answer.

I still have our office furniture in storage, you know, just in case we change our minds.

It’s not like it’s been six years or anything.

The best part for me is the ability to start work at 5 a.m. and to keep going straight through to lunchtime.

If we had an office, not only would I have to listen to:

If so and so gets their job done, I don’t want to babysit.

It drove me nuts.

I also could not sit in my cycling clothes until noon and then ride at lunchtime.

Being virtual really is quite glorious.

It doesn’t come without its challenges, but we work hard to make it as much like we’re together as possible.

How We Work: Daily Scrum Meeting

I mean, there were days people would pop their heads in my office to say good morning and good night, but I didn’t see them at all during the day.

What difference did it make if they did that in person or via instant messaging?

When we went virtual, though, NO ONE else was doing it. And the technology wasn’t quite there.

I remember asking our IT firm to help us get everything to the cloud (which was a new-fangled term back then) and they looked at me with blank stares.

(We ended up firing them and finding someone who could see our vision.)

It’s been six years of trial and error and testing what works and what doesn’t work.

For instance, instead of a daily scrum meeting, we have a daily checkin on Slack.

We could most certainly do that via Zoom at a certain time every day, but I decided a Slack channel dedicated to the purpose was better.

It was a selfish decision in order to avoid:

But our team meetings and our one-to-one meetings with our supervisors/direct reports happens as face-to-face as we can get them.

How We Work: Meetings

Every Monday, I meet with my direct reports, one-on-one, via Zoom.

I do have the advantage that Dawn Buford is in Chicago, so we meet weekly at Starbucks.

But everyone else is scattered around the globe so I meet with them on Zoom.

While it’s not the same as face-to-face, it’s pretty darn close.

I actually find people are more attentive and present via Zoom than they are in person.

You can always tell if someone is checking email or reading the text that just popped up on their screen or glancing at Slack.

In the beginning, I was very good at calling people out for that (I don’t have to do it anymore).

Because of my insistence that distractions be turned off—and because I can see if they’re cheating—meetings become much more productive.

We also conduct our staff meeting via Zoom and it’s my favorite thing to watch new people attend those.

The women put on makeup and do their hair. The men shave and wear a button-down shirt.

After about a month, the men show up in baseball hats and the women don’t even bother with makeup.

You would never do that in an office setting.

As well, there are two people on my team I have never met in person, but Zoom makes me feel like we have.

If you can’t be together in person, it truly is the next best thing.

And, because I can’t do the whole “the leader should get up and walk around” thing, I’ll just ping someone and ask them to jump on Zoom.

We’ll brainstorm, chat, or just catch up for a few minutes.

How We Work: Collaboration

The next question people always ask me is:

No, it’s not impossible! Don’t be silly.

It’s a bit more challenging and I will admit there are times I’ll get off the phone with a client and need a good, in-person brainstorm session.

So there are two ways in how we work that collaboration totally kicks butt:

We also moved to G Suite this year, which has made life just a little bit easier.

It’d be lots better if someone on our team would use Google Docs (cough, Laura Petrolino, cough), but it’s like she’s a 90-year-old woman who doesn’t like these new-fangled toys.

(She prefers to work in Word and then transfer everything. I keep trying to tell her she’s doubling her work. Maybe you can try?)

We’ll get her there!

How We Work: Project Management

Which leads me to project management.

We tried Asana at first, but couldn’t make it a habit.

Then we tried Trello, but it drove me INSANE.

Now we’re on Basecamp and it works for everyone.

We finished our 2018 plan a couple of weeks ago and then everyone input their timelines into Basecamp.

It works because now, when someone wants to know when something will be done, we can check Basecamp.

If something is behind, we all are alerted and can jump in to help.

And, let’s be real, Basecamp was created by the guys who wrote Remote. Of course it works for virtual teams!

How Do You Work?

All in, how we work is not that much different than how you work.

There are some challenges, but the pros far outweigh the cons.

And, like I said last week, many of you already work with remote workers via attorneys, accountants, HR, freelancers, and more.

It’s not a big shift to let your team work from home.

And now it’s your turn. How do you work? What questions do you have about going virtual?