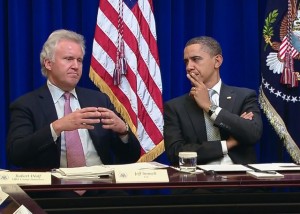 Did you see Jeffrey Immelt, the chairman of GE, on 60 Minutes last Sunday?

He’s been given the jobs czar title by President Obama, with the sole charge of convincing companies to hire, and Lesley Stahl was there to understand more.

Her big question…whether or not the man who has sent more jobs overseas than any other chief executive has what it takes to create jobs in America.

This is not a political blog post. After all, President Obama is a democrat and Immelt is a republican (who recounts a very funny story about his mom telling him he had to turn down the President because of it).

Nor is it a blog post about whether or not he’s qualified for the job. I think any person who can not only replace the great Jack Welch and continue to build and grow a company deserves the utmost respect.

It is, however, a blog post about the economy, leadership, and being an entrepreneur.

A few weeks ago, we talked about the fact that corporate America is sitting on $2 trillion in cash. Cash they’re afraid to spend because they don’t know what’s going to happen with taxes and because they’re afraid if they hire people to make more widgets, there won’t be anyone to buy them. And then we’re back where we started.

The thing about Immelt being jobs czar is he is likely friends with the executive at the companies that are sitting on that kind of cash (Microsoft, Cisco, and Google, among the top 10). Perhaps he can convince them job creation in America is the way to go. After all, we tend to listen to our friends, do we not?

But about how to invest in our companies? Don’t we know better than anyone?

According to the Wall Street Journal, FMC Corp. (another company in the top 10) has already made the decision to not be financially aggressive going forward.

If that’s the case, what can our new job czar do about that?

You know what I would love to see? I would love for our nation’s politicians to work on Main Street, running our businesses for 90 days. I’d love to see Immelt create a task force of people who can make a difference in Washington worry about cash flow and chasing money and how to make the next payroll. Just for 90 days. But really be involved in all of those decisions.

Then let’s see what changes are made to energize the economy. Because it isn’t up to the top 10 companies sitting on $2 trillion in cash. It isn’t up to Washington or President Obama or Jobs Czar Immelt.

This first ran as my weekly column for Crain’s.