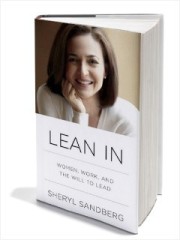 This blog post is going to make some of you angry.

I read “Lean In” and I wholeheartedly disagree with the criticism the book has received. My guess is most of the critics haven’t read the book or they wouldn’t have made the arguments they did. Which kind of sucks (like spin sucks), but I also understand we live in an age where long-form content is becoming less and less…consumed (I hate that word, but can’t think of a better one).

Content, of course, has to be written and if you can criticize a book on the topic without having to read it, I guess more power to you.

I think that is exactly what has happened. Not with all of the criticism, but with a gross majority of it.

Heidi Sullivan, the senior vice president of digital marketing for Cision, and I were talking about it last week and she said, “I felt inspired and empowered after I read it.”

The interesting thing about all the buzz you hear about the book is about the concept of how we should lean in, but the truth is, it’s only about half of one chapter.

The concept of “leaning in” is to go after your dreams. Have the ambition to want a leadership position. Go for that promotion. Do what you want with your career until the time has come to make a different decision.

Which leads me to it’s a jungle gym, not a ladder.

Mitch Joel talks about this concept in Ctl Alt Delete, too. Many of us think we have to make a decision about the rest of our lives when we’re 18 and then we get stuck in jobs that followed our degrees and we hate our lives.

By the time you figure out what you’ve been doing for 10 or 15 or 20 years is terrible, you have responsibilities so you stick with it.

But here’s the thing, you don’t HAVE to do that. You also don’t have to shy away from a promotion or a bigger job right now because you might have a family in five years. When you think about it that way, it’s the most ridiculous and illogical thing ever. Yet, many, many women do this.

The way to where you’re going is not a straight ladder. You’re going to hustle across the jungle gym…and that’s okay!

Sit at the Table

While you’re hustling across the jungle gym, though, find a way to sit at the table.

She tells a story in the book about how, when she began a new job, she was invited to a big meeting. Because she was new to the organization and she didn’t yet know the protocol, she arrived in the conference room and took a seat in one of the extra chairs that was not at the table, but towards the back of the room in a corner.

During the meeting, she listened, she took notes, but she didn’t speak. At the end, the big, big boss asked her what she thought and she faltered a little bit, saying she didn’t yet have an opinion because she had just started.

Later, her pulled her aside and told her not only did he hire her to hear her opinions, she needed to take a seat at the actual table.

You Don’t Have to Be a Man

Sit at the actual table, spread yourself out by sticking out your elbows, and take up as much room as you can without making the person sitting next to you uncomfortable is some advice she gives when it comes to how men and women behave differently.

But she also doesn’t argue that we have to behave like men. She points out some differences and provides some insight, but overall, she supports different styles in the workplace.

It’s here where she talks about her friend, Marissa Mayer, who was taken to task in the media for taking only two weeks for maternity leave. She says,

The point here is women’s equality is about making the choices that are best for us. If you want to take two weeks or 12 months maternity leave, that is entirely up to you. If you want to be the CEO of a Fortune 10 company or work inside the home, that is up to you.

We have the choice and it doesn’t have to be what our male counterparts would do or what society thinks we should do.

What Was So Inspiring

But what I really, really loved about the book is this wasn’t about Sheryl Sandberg and her privileged life, like so many of the critics have proclaimed.

This was about the way women behave, the things we do in the workplace and at home, the way society thinks we should behave, and the way we treat one another.

A few additional things I thought were really interesting:

Mostly what I loved about the book is I see so much of myself in many of the concepts she discusses. Yes, I took some risk and started a business. Yes, I have an intense drive. Yes, I am competitive.  Yes, I am goal-oriented.

But I also do a lot of the things so many of us do…and it’s holding me back.

It’s also holding you back.

Every, single woman who earns a paycheck in any form needs to read this book.

If you work from home and have a handful of clients – clients you have to negotiate rates with every so often – or you work in a Fortune 500 organization and are trying to find your way, this book is for you.

If you make your living editing or sewing or baking or watching children or writing or are practicing law or are a teacher or are a doctor or run a small business or are an entrepreneur or are on the corporate ladder on your way to the executive suite, this book is for you.

If you work inside the home and ever hire contractors to help you out, this book is for you.

This book isn’t about privilege or what some of us have that others don’t. It’s about being able to achieve anything we want. It’s about knowing when to lean in, but also when to lean out. It’s about deciding what your definition of having it all means…not what the rest of us want it to mean.

It’s about truly making the choices our mothers and grandmothers fought so hard to let us have.