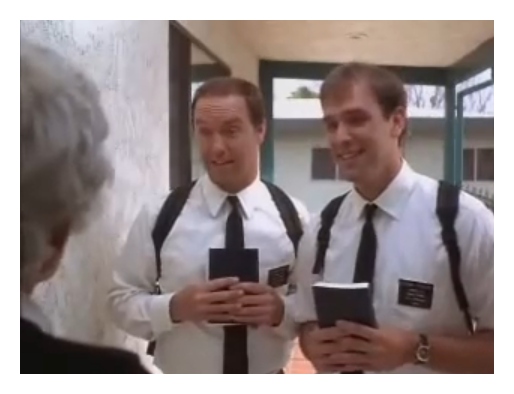 Some of you may not know that I grew up in Utah. The inevitable question, after I tell people that is, “Are you Mormon?”

Yes, I was raised Mormon. Through a series of family events and some hypocrisy with some of the members in our ward, I stopped going to church when I was 18, right before I graduated from high school. And then I went to a Catholic university (Creighton), where I was required to take a different theology course every semester.

Because of that, I learned (and grew to believe) in other philosophies; other theories.

I’ve never found my way back to the church. I am what one would call a Jack Mormon (not that they label or judge people for decisions made outside of the church).

But I’m always drawn to stories, articles, and leadership lessons from the Mormon faith. It’s true I’ve been away from the church longer than I was in it, but it’s still my roots.

That’s why I was fascinated to read this article in BusinessWeek about Mormons, their missions, and how they produce leaders.

If you don’t know, Mormon men, at the age of 19, leave college to serve a mission. Some are sent overseas, some are sent to third-world countries, and some stay stateside. Women can serve missions, too, but not until they’re 21. You see, they typically go to college to get their MRS degree, dating and then marrying the men who are just coming back from their missions. But that’s not for all and there are some women who serve missions and then live a long and fruitful married life.

I’m not going to say we beat everybody out, but we do have a reputation. And one of the defining opportunities for young men and young women is the mission experience.

Because of the mission experience, there are Mormon leaders at Marriott International, American Express, American Motors, Dell Computers, Lufthansa, Fisher-Price, Life Re, Deloitte Touche Tohmatsu, Madison Square Garden, La Quinta Properties, PricewaterhouseCooper, and Stanley Black & Decker. The head of human resources at Citigroup is Mormon, and in 2010 Goldman Sachs hired 31 grads from BYU, the same number it hired from the University of Pennsylvania’s Wharton School.

Steve Young is Mormon. So is Steven Covey. And David Neeleman, the founder of JetBlue. And Mitt Romney, who is running for President.

Heck! Maybe someone you work with is Mormon.

So, the next time you crinkle your nose, think “whoa that person is weird,” or ask the person how many wives their dad had when you hear they’re Mormon, think about all the good they’ve done, both on their missions and in corporate America.

And remember, polygamy is against the law, no matter which religion you practice.